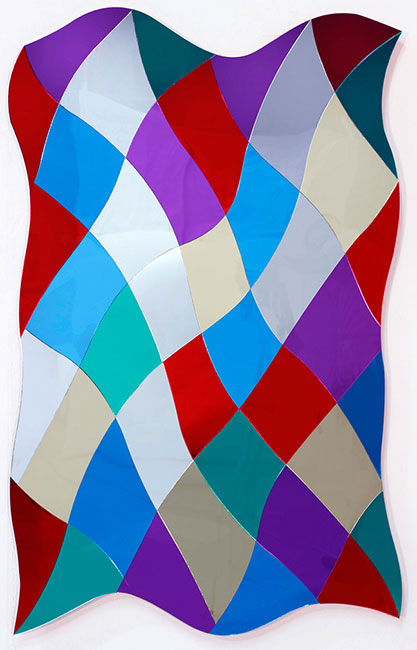 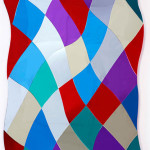 In “Grotesque”, Matthew Carter presents works dealing with the obliteration, recuperation, and re-animation of the figure through three distinct bodies of work: “Exquisite Corpses”, a group of mix-media collages; “Glitter and Scars”, a series of unique mirrored works; and new mix-media paintings on linen from his ongoing “hellequinharlequinclown” series.

Though sharing the same name, Matthew Carter’s “Exquisite Corpses” are less about the Surrealist parlor game (Cadavre Exquis) than the artist’s own strategies of image reception and icon excavation. Manifesting somewhere between a scrapbook and a merz, Carter’s “corpses” reveal an array of decals, stickers, overhead transparencies, and other low-tech pedagogical forms that contrast the subjective nature of the personal archive with the didactic nature of research materials. In these works, the element of “deception” produced by chance, unpredictability, and collaboration in the original game is turned on its head – multiple subjectivities are still at play in a single figure/object, however they are the creation of one person rather than a group.

Mining the debased archive of rotten.com, Carter’s re-materialization of the digital image in these collages can be viewed as a creative resurrection of sorts (a la Frankenstein): a dwarf is cut out from a John Wayne Gacy painting, the pictorial negative space between Albert Speer and Hitler is isolated, emphasized and re-spliced. The amateur quality of the “home” inkjet print offers a lens of sentimentality for the images of raw meat, muted Nazis and forgotten killer clown ephemera. Deception is further at play in the conflict between the different set of images that hide or cancel each other out.

If the “Exquisite Corpses” collages are about the figure’s mutilation (Carter likens the archiving and scrapbooking process to “a coroner using formaldehyde to preserve a corpse”), the works in “Glitter and Scars” are about the figure’s fragmentation and re-assembly through the structure of a mosaic. In these works, Carter has used earlier paintings from the “hellequinharlequinclown” (HHQ) series to map out new variations of the pattern onto multicolored reflective Plexiglas panels; however, unlike the HHQ series, the prominent use of mirrors in “Glitter and Scars” provides the spectator a direct confrontation with the performer (the self, actor, harlequin).

Carter’s motivation and strategy is structured by the opposition between a normalized grotesque and an outlandish ordinary, while struggling to stay within a problematic of modernist abstraction. In “Exquisite Corpses” Carter shortcuts the mental process between inspiration and application by gluing the unprocessed inspiration material straight onto the final work. The collages rehabilitate the “bad” and tarnish the “good” with the intention of subverting both. In “Glittter and Scars”, the visual fragmentation of both viewer and architectural space takes place through the salon-style hanging as well as the surrogate “drawing” revealed by the pattern. Traversing from the physical to the digital trace and back again, “Glitter and Scars” brings up processes of editing and modularization, as well as narcissism and empathy.

By turns brutal, violent, comforting, and mundane, the works in “Grotesque” are strangely serious and sincere.