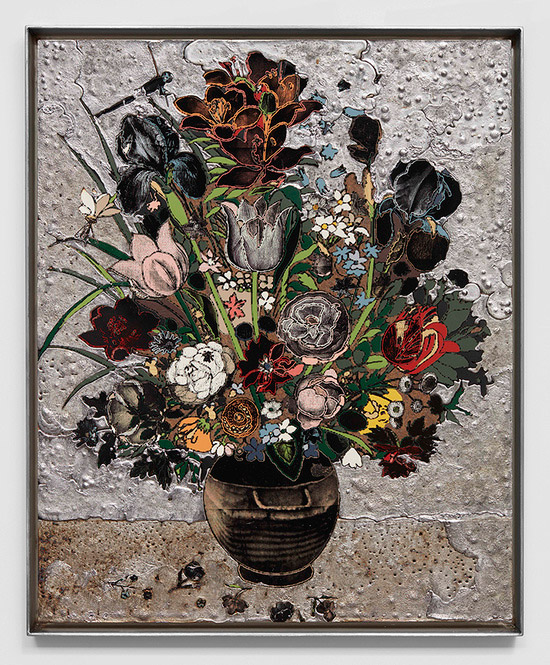 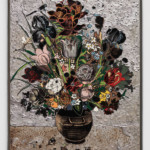 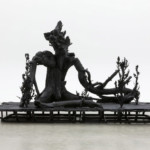 Hauser & Wirth London is delighted to present Matthew Day Jackson’s upcoming exhibition, ‘Still Life and the Reclining Nude’. The artist’s interdisciplinary practice explores a myriad of aspects of human experience and draws from sources that reveal both our intrinsic inventiveness and its counter-point, our ongoing capacity for destruction.

The exhibition will feature an entirely new series of still life paintings and bronze sculpture. As Jackson explains, ‘I am interested in exploring how certain ideas, forms, images, narrative structures and traditions are manifest in the present. The process by which they are severed and dismembered from the past is how they are enlivened.’ Utilising the conventions of still life and the reclining nude figure in combination with a precise use of material and form, Jackson critiques these traditions, their cultural placement and his own authorship in relationship to these ways of working.

The series of still life ‘paintings’ are direct representations of Jan Brueghel the Elder’s and Younger’s genre defining series of flower paintings from the 16th and 17th centuries, made during a time of Dutch colonial expansion and exploitation. The significance of these works for the artist is their simultaneously beguiling and prosaic qualities; they are both an exuberant expression of nature’s bounty and a visual manifestation of power and wealth. While the era was one of burgeoning scientific knowledge, Jackson signals the pitfalls of the ceaseless misuse and abuse of the natural world. This concern ties into the American environmental movement and issues of sustainability that have been explored in Jackson’s previous works. If Brueghel’s paintings are a celebration of nature as a divine gift to humanity, Jackson presents an alternative to this view since for the artist, ‘each work is a meditation on exploration, the past found in the present, and is a critical discourse of technology and our persistent tendencies to open Pandora’s Box.’

Throughout Jackson’s oeuvre, process and materiality as a conduit for meaning has been a recurrent theme. The flower ‘paintings’ are entirely composed of artificial and manufactured materials such as Formica, plywood and epoxy. These materials have a personal resonance for Jackson and are imbued with memories from his past and his own ‘American experience’. The use of these substances is a meditation on the domestic environment, aspiration, class and impermanence. In ‘Bouquet of Flowers in a Vase’ (2017), Jackson encloses the delicate form of the screen-printed and in-laid flora within a poured lead surround. This metal has associations of poison or death and, in this manner, the artist signals a memento mori ingrained in the fabric of the work itself.

The sculptures that feature in the exhibition have arisen from Jackson’s interest in, ‘how we assemble and constantly reformulate our identity through our own form’. Works such as ‘Untitled’ (2017) are both a contemplation and critique of the tradition of the reclining figure – frequently nude and female – which came to define notions of beauty in the western canon. For Jackson, appropriation is a means of investigation and mining the past is a way of understanding how collective knowledge and received ideas come into being. In this exhibition, the works draw on his consideration of the odalisque as the ultimate eroticised representation of the body on display for a spectator. The interest in delving into the relationship between race and past preconceptions of beauty was inspired by his reading of ‘The History of White People’ by the acclaimed historian Nell Irving Penn.

The human relationship with nature and our inclination to see human form in inanimate objects – a form of ‘pareidolia’ – has inflected Jackson’s versions of the reclining figure which are composed of found forms. The artist sourced broken and rotting branches, detritus from unseen corners, during walks in Wyoming and New York, casting these components in bronze to create the parts for his human representations. In this way, he encourages us to examine our own tendency to see and project ourselves onto nature, equating the human body with a landscape, a profile of mountains or a vista. The Scottish thistles that are depicted in the reclining figure sculptures are representative of how we define what is beautiful, or desirable in nature. These weeds are considered invasive in much of North America and, for Jackson, these plants relate to larger contemporary conversations regarding insurgents, refugees and immigrants. As he explains, ‘with their inclusion in the sculpture, I wish to turn a critical eye on how we define and classify that which we see as ‘other’ or undesirable.’ For Jackson this examination of human nature has repercussions because, ‘the more we look to the past and our interaction with tradition, history, images, forms and mythology, the more we can address the current situation.’