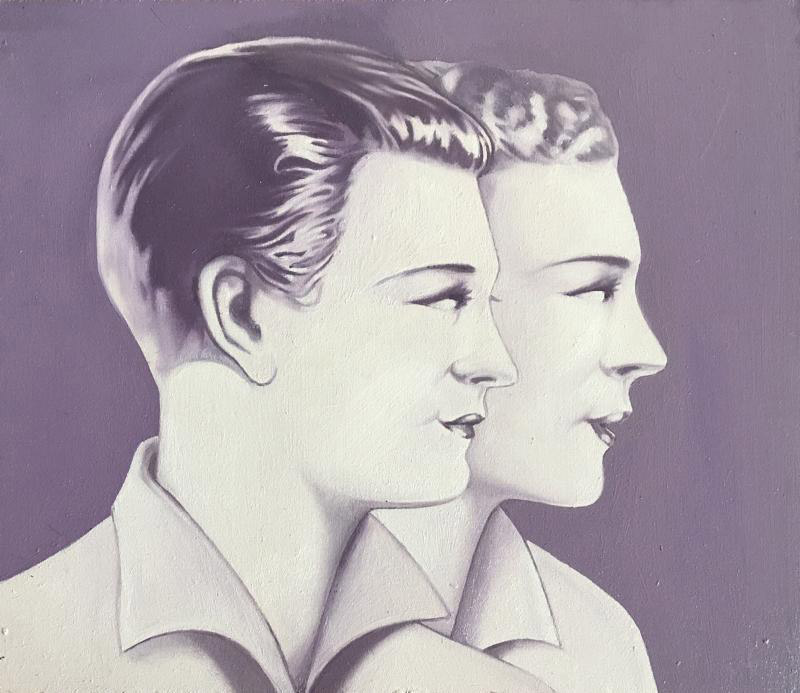 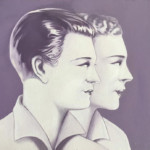 McDermott & McGough, which consists of David McDermott and Peter McGough, has been making work since 1980. They first emerged from the East Village art scene of the 80’s, becoming known for their practice of immersing themselves in the Victorian Era, living their lives according to the sartorial and technological standards of early 1900’s America. By creating a “time portal,” as they called it, the pair deconstructed narrative and nostalgia, focusing on issues of sexuality, bigotry and AIDS. Since that early period of their output, their practice has expanded, appropriating themes and visuals from American mass media of the 1950’s and 60’s – Hollywood movies, advertisements and comic books, to name a few – to address these subjects.

For this exhibition, McDermott & McGough have turned their attention to the subject of the closeted homosexual man in Hollywood. In the past, as, to a somewhat lesser degree, today, it has been necessary for gay men to conceal their sexuality in order to succeed in the film industry – a fact the artists consider both absurd and tragic. The examples of closeted Hollywood men are countless, from celebrities like Rock Hudson, James Dean and Liberace, to lesser-known artisans – producers, directors, costume designers, makeup artists. With the works in this show, they pay tribute to the taste, style, and life of the Hollywood homosexual, acknowledging his historically hidden existence.

Three large paintings of interior domestic spaces adorn the walls of the bungalow. These living rooms, decorated in the styles of the 50’s and 60’s, are adorned with subtle signifiers of homosexuality: muscle magazines, framed illustrations of male bodies, pieces of queer literature. Such objects were a means to openly manifest homosexuality without risking one’s reputation or physical safety. Queerness, here, is at once invisible and overt – embedded into the very fabric of the subjects’ homes.

Of especial importance to the show are the figures of Montgomery Clift and Ramon Novarro, actors and sex symbols active in the first half of the 20th century. Both men’s lives ended in tragedy: Clift died from side effects of alcohol and drug addiction, while Novarro was killed by two brothers who were male prostitutes. The artists have painted tender, greyscale portraits of these stars, each with a smaller, blue-toned image superimposed over a corner of the picture. The smaller pictures are tertiary illustrations of the actors’ deaths: one portrays Clift supine on a floor, swigging from a wine bottle, while the other shows a nude Paul Ferguson, one of Novarro’s murderers. These works are meditations on the hardship and sadness that often accompanies a closeted gay life, as well as loving tributes to their subjects.

Other works in the exhibition mine a vast swath of cultural and visual history, employing text and cartoonish figuration to explore the repressive, violent history of American cultural attitudes towards homosexuality. Two works, both rendered in light purple, read “lavender marriage” and “lavender scare” – references to the practice of gay men marrying lesbian women in order to pass, and McCarthyism’s anti-homosexual witch hunt, respectively. Another small painting, stylistically aping Victorian-era illustration, depicts a scantily clad male figure perched atop an erect penis, which is spewing an arc of gold coins into his purse. This piece satirizes the subjective societal values that condemn gay sex as immoral, an act of waste and a violation of prescribed heternormativity.

The artists have turned the garage space into a film-set: the studio for a semi-fictional gay artist, loosely based on the illustrator George Quaintance, who became famous for his homoerotic depictions of men for mid-20th century physique magazines. While mostly avoiding overt depictions of homosexuality, the artworks repurpose visual styles and content from Classicism to produce sexually charged, highly emotional gay imagery.

This year, McDermott & McGough will be the subject of a career retrospective at Dallas Contemporary, curated by Alison Gingeris, which will travel in 2018 to Studio Voltaire in London. The artists will also participate in Documenta 14 in Kassel and Athens. They have held numerous institutional solo shows throughout their career, including at the Akureyri Art Museum in Iceland; the Andy Warhol Museum in Pittsburgh; the Irish Museum of Modern Art in Dublin; Kunsthalle Wien; and Provincial Museum of Modern Art in Ostende. Group show appearances include the 1987, 1991 and 1995 editions of the Whitney Biennial, as well as The Hammer Museum in Los Angeles; the Museum of Fine Arts in Boston; and the New Museum of Contemporary Art in New York. Their work is included in many public collections, including those of The Metropolitan Museum of Art, New York; The Whitney Museum of American Art, New York; The Broad, Los Angeles; and The Los Angeles County Museum of Art, Los Angeles.