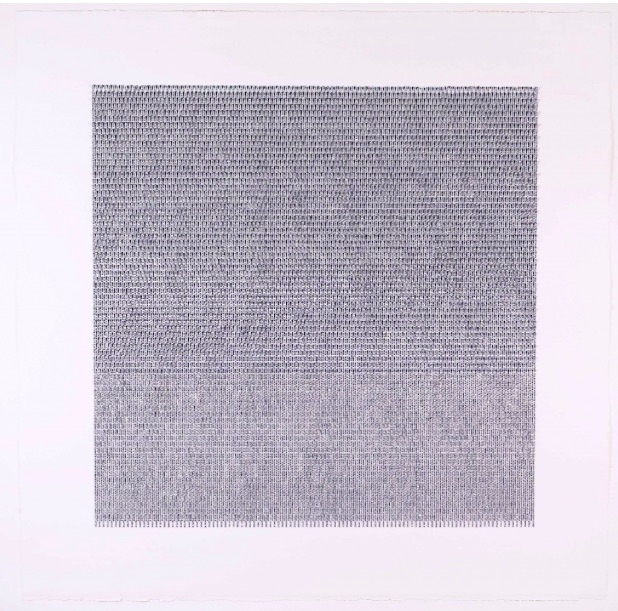 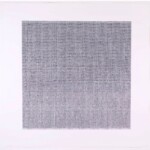 Margaret Thatcher Projects is pleased to present “Cathedral”, an exhibition of works by Meg Hitchcock. In this body of work, the artist explores the psychological architecture of religion, and the complex mental structures that are created in order to perceive the true nature of humanity.

Building upon a simple idea or a solitary word, elaborate belief systems are constructed to house our most sacred values. Through repetition and recitation, the idea or word carries associations deeply ingrained in the psyche. From the artist’s perspective, chants, mantras, and incantations are designed to transcend language and penetrate the inner sanctum of the mind, where it is finally revealed that the object of worship is the Self.

The works featured in “Cathedral” draw upon these notions of our relationship to religion, through the lens of psychology. Meg Hitchcock’s “ritual” of painting, typing, cutting and gluing, is combined to create a field of symbols that defy a single interpretation. With each type-written strip of text that is layered in a shingle-like pattern, Hitchcock is slowly stripping away its meaning to expose the raw materials of ink and paper.

In whole, the act of creating each typewritten strip of text transcends Hitchcock’s art-making practice, and even the definition of the text itself, becoming a form of meditation. Once the meaning is dissolved, the words become an essence, before transcending into a signifier of its former content.

Meg Hitchcock is a painter and text-based artist living and working in New York’s Hudson Valley. She received her BFA from the San Francisco Art Institute, and studied classical painting in Florence, Italy. Her work with text is a culmination of her lifelong interest in religion, literature, and psychology. Hitchcock’s work has been shown in New York, Los Angeles, San Francisco, Chicago, London, and Berlin, and reviewed in Art in America, ArtCritical, The New Criterion, Huffington Post, Hyperallergic, and The Daily Beast. Her work was included in “State of the Art: Discovering American Art Now” at Crystal Bridges Museum in Arkansas.