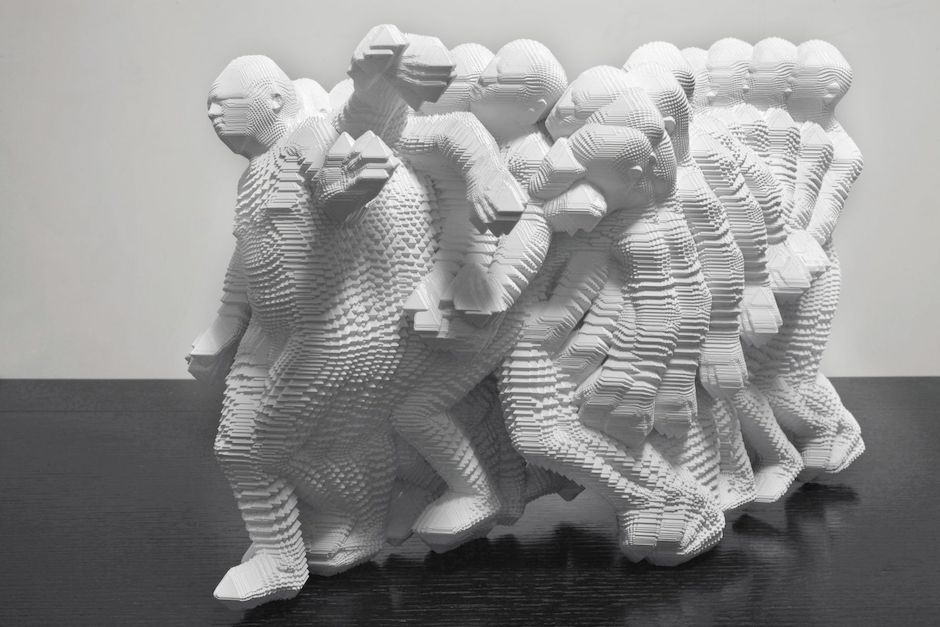 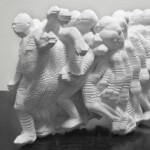 Eli Klein Gallery is pleased to present a solo exhibition of works by Miao Xiaochun (b. 1964), a central figure in China’s wave of new media art. This exhibition consists of painting, sculpture, and animated video works, which represent over a decade’s exploration and experimentation in response to the increasing acceptance of a new breed of subversive technologies – particularly 3D printing. Miao Xiaochun’s “Gyro Dance” series is a high-energy feast for the mind as much as for the senses – it is a futuristic manifestation which raises timeless questions, especially at a time when the sheer amount of sensory amazement often prevents works with depth to be made and accepted in this young field.

Ever since the Greek philosopher Pythagoras allegedly claimed that the basic building blocks of the world are numbers, mankind had no turning back from the addiction of pixelating everything whether it is in science, music or visual arts. Any line of dulcet tones must be transcribable into notes; any curves must be formulizable by breaking down every single dot that makes up the curve. Modern history of art has seen some of its finest artists engaged in this analysis: 20th century Italian artist Vincenzo Agnetti took the idea literally and challenged the arbitrary use of numbers. Germany’s Charlotte Posenenske was more elaborative and built her cosmos with mass-manufactured parts in modern industries. In “Gyro Dance”, Miao Xiaochun carries out his own treatment of this issue where men and machine became the co-creator of the world: as a duo, they utilize an arbitrary vector as the fundamental building block of Miao Xiaochun’s world. It is this vector that his paintings, sculptures and video works are built upon.

Ironically, the fourth dimension, time, is addressed and emphasized in this series of 3D inspired works. On the one hand, it seems perfectly reasonable that the works show how one figure moves over time to create an appearance of a collective of figures. On the other hand, however, it seems when the factor of time is churned into this equation of the first, second and third dimension, the end result somehow doesn’t show an increase in dimensionality. Maybe Heidegger’s comment “Time is not a thing, and yet it remains constant in its passing away without being something temporal like the beings in time,” will offer a reasonable way out of Miao Xiaochun’s dimensional paradox.

Historically, futurism has focused on a specific period of 20th century Italy. Italian futurism has had a profound influence on Miao Xiaochun, however the “Gyro Dance” series is futuristic in a broader sense even though it shares Italian futurism’s sense of movement, flow, and happening: A specific period of time, the future, seems all so unknown and mysterious to us where all our current methods of depicting the future would seem absurd. Miao Xiaochun named all eight sculptures in this exhibition after Google translating eight indeliberately chosen lines from the book “Futurism – Surrealism” which is a Chinese elaboration on western movements. The distant, if not lack of connection between the title and esthetics of the sculptures, showcases this particular absurdity. In the same sense, an ever-spinning gyro not only resembles the movement of figures in the works, but also symbolizes an object within which temporal and eternal spheres can co-exist.

The collaboration between men and machine defines Miao Xiaochun’s career. It points to the future where machine’s status as the subordinate co-creator second to men might soon be challenged. Is the future of art embraced by technology only bleak and bloodless? Miao Xiaochun chose Beethoven instead of a more strictly ordered composer to provide the background for his video work “Gyro Dance”. He scanned his own blood-filled mortal body as the prototype of all human figures in his works instead of an arbitrary machine creation. The future painted and programed by Miao Xiaochun might still show a glimpse of humanism in this inevitable process.