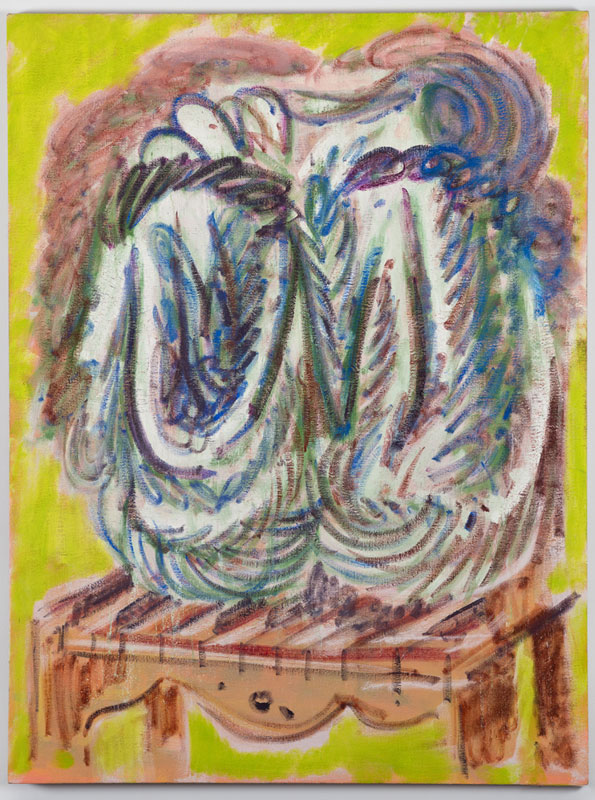 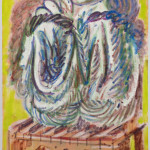 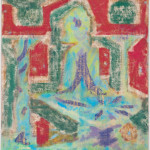 I’ll take you there. (The Staples Singers)

Jeff Bailey Gallery is pleased to present, “Michael Berryhill – Shrine Time”, an exhibition of new paintings and works on paper.

Experiencing a Michael Berryhill painting is like taking a small journey, yet with no beginning or end point. Color, line and pattern move back and forth, up and down. The line of the brush can easily be followed, but may turn back on itself, advancing in a different direction, or trailing off.

Each work evokes a sense of place, and may suggest a stage set, repository or reliquary. Figures seem to lurk among these forms, under sheets or in the shadows. Some cannot be identified within the image, but might be felt alongside the viewer.

The title of the exhibition, “Shrine Time”, implies both the physical space and spiritual aura of a shrine. For Berryhill, the object itself (the painting or drawing), and the act of stopping and looking, supplies the ultimate meaning. Or, as he says:

There’s nothing you need to believe or have read – to have it.

This is Michael Berryhill’s seventh solo exhibition. His most recent was at Kansas Gallery, New York, where he is represented. His work has been featured in numerous group exhibitions throughout the country. He was recently awarded the Robert Rauschenberg Foundation Residency in Captiva Island, Florida and Modern Painters Magazine named him one of their “25 Artists to Watch” in 2013. He received his BFA in 1994 from the University of Texas at Austin and his MFA in 2009 from Columbia University. He attended the Skowhegan School of Painting and Sculpture in 2007. He lives and works in Brooklyn, New York.