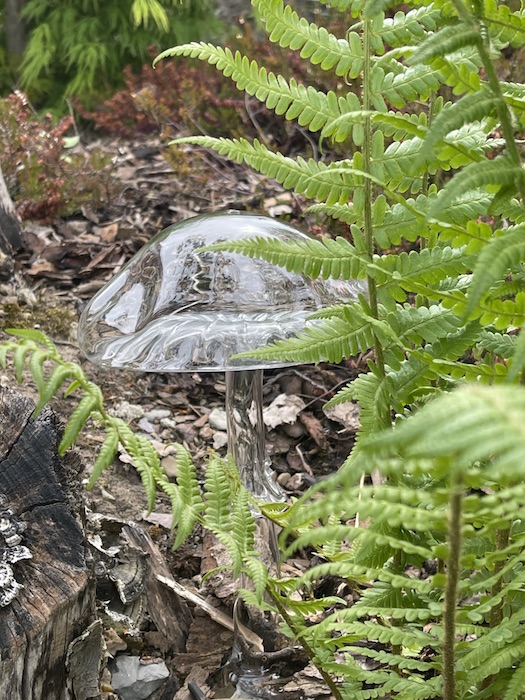 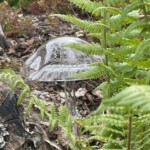 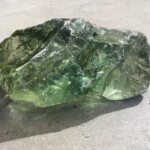 Grieder Contemporary is pleased to present “Enchanted Forest”, an immersive installation featuring recent works by Michel Comte and Melli Ink. Dealing with two of the most mesmerising and mysterious entities belonging to the natural world — glaciers and mushrooms — the sculptures created by both artists for this exhibition transport the audience into a magical world. Glass as raw material is the protagonist of “Enchanted Forest”, as well as a messenger of the current global emergency of climate change.

“Enchanted Forest” contrasts the heavy and archaic nature of Michel Comte’s sculptures with the delicacy and lightness of Melli Ink’s pieces. Nonetheless, the series of works of both artists find a common ground and dialogue with each other on the laid-out of aluminum that covers the gallery’s floor. Being a conductive element, aluminum was chosen as the surface to guide and contain the conversation between the works. At the same time, its reflective characteristics remind the audience of water and together with the dramatic lighting of the space, adds an almost theatrical element to the installation.

Michel Comte‘s nearly sacred looking works seek to capture the sublimity of nature, that which is in danger of disappearing, or which has already vanished. Being himself a passionate mountain climber, the Swiss artist has spent decades developing works that address and document the climate emergency. His most recent work, “Drifts”, 2020, features sixteen cast glass sculptures measuring 20 to 75 centimeters. From a distance, the pieces look like raw rocks, but seen from close up, the fascinating interiors of the sculptures open up to the viewer, revealing a similarity to ice formations or crystals. The title, Drifts, refers to the rocks and sediment that emerge through the erosion, shifting, and debris of glaciers.

Comte’s fascination with snow and glaciers is also represented in his works Salt and dust, 2018, which explore the paradox of the seemingly indestructible glaciers which are, in fact, incredibly delicate and highly vulnerable objects. In his series of canvas Salt and dust, the white hand-ground natural pigments and salt remind the viewer of the fleeting beauty of the icy head of the high snow mountains; whereas the black canvas depict the earth underneath the melted glaciers. Comte also associates the pure black pigment with the dust (cryoconite) that has settled on so many of the world’s melting glaciers, blown in by strong winds and accelerating the ice’s melting process. The blue canvas represents the light before dawn, which brings hope and happiness. Each one of the works is the result of more than 39 layers of pure mineral pigments and paints.

Sharing the need and interest in pointing to the importance of preserving the intricate balance of the natural world that sustains humans as a species, are the works of Austrian-Swiss artist Melli Ink. For “Enchanted Forest”, the artist focused her investigation on mushrooms, developing a series of drawings and glass sculptures that explore the fascinating yet often overlooked importance of fungi in the natural world. As it has been pointed out by scientists, most fungi live out of sight, yet they constitute an enormously diverse kingdom of organisms that support and sustain almost all living systems. Trees, for example, are known to communicate with each other through a complex subway network of fungi that are capable of sending warnings or nutrient signals to their conspecifics.

Attracted by the astonishing characteristics of fungi, which on the words of Merlin Sheldrake “can change our minds, heal our bodies, and even help us remediate environmental disaster”, Melli Ink focused on these extraordinary organisms for her latest body of work. Thanks to her long experience working with mouth blown glass, the artist sought to remove the dark and engaged repulsive connotations that mushrooms are believed to have, showing them from a new perspective and allowing their delicate beauty to show the transformation through the glass.

Nature’s creatures have been a constant in the work of Melli Ink. Throughout the last decade she has worked closely with artisans to create her incredibly detailed sculptures of mouth-blown glass depicting creatures such as jellyfish, octopus, carnivorous plants, among others. In her fungi series, Melli Ink’s works incorporate references to artists who have inspired her, especially the work of Ernst Haeckel (1834-1919). The drawings of German biologist, naturalist, philosopher and artist Ernst Haeckel popularized the ideas of Charles Darwin. He used his talent to draw the beauty of lesser-known creatures: microscopic organisms, mineral skeletons, fungi, anemones, corals and jellyfish, among others. Like Haeckel, Melli Ink also works with a detailed look at nature: she reminds the viewer not only of the profound beauty of nature, but of the impossibility of humans to live separated from it.

The subtle and fragile, yet powerful works of Michel Comte and Melli Ink not only bring the audience into a mesmerising “Enchanted Forest”, but act as a reminder of the effects of human life on earth as the driving force of climate change.

Michel Comte (*1954, Zürich, CH) lives and works in Zürich. He is a Swiss artist, photographer and environmental advocate. Originally trained as a professional art restorer, Comte is a self-taught photographer who has significantly influenced contemporary photography. In addition to his commercial work, he has collaborated on documentary assignments in war zones for the international Red Cross and his own non-profit organization, the Michel Comte Water Foundation. His most recent art project “Light” which studies natural landscapes and explores the impact of environmental changes has been exhibited at the La Triennale di Milano (2017), MAXXI in Rome (2017), Galerie Urs Meile (Beijing 2018 and Lucerne 2020) and Dirimart (Istanbul 2019). Recently he also showed his “Erosion” Series at Galerie Urs Meile in Lucerne (2020) and at his own atelier in Uetikon am See, Zurich (2021).

Melli Ink (*1972, Innsbruck, AT) lives and works in Zürich. Melli Ink is fond of incorporating traditional techniques in her practice and repurposing them for contemporary art. She draws her inspiration from art history, literature, film, music, as well as from popular culture. Her media include sculpture, film and performance and she specialises in juxtaposing materials such as glass and mountain crystal, metal and ceramics. Her work has been seen in solo and group exhibitions, including: Museum Kunstpalast, Düsseldorf; Kunsthaus Baselland, Basel; Patrick Painter, Los Angeles; Haus Konstruktiv, Zurich; Gasträume, Zürich; Avlskarl Gallery, Copenhagen; Manifesta 11, Zurich. Her most recent solo shows are “Of Insects and Other Creatures” (2018) at Michael Fuchs Gallery, Berlin and “Faces” (2019) at Palazzeto Pisani, Venice.

Gallery hours Friday 11 am – 6 pm, and by prior arrangement