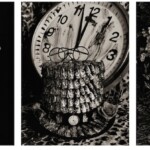 At first glance they appear to be ordinary objects – a designer dress, a top hat, a high-heeled boot. But after closer examination, the viewer realizes that sliced peas have been fastened to the dress lining; the surface of the hat has been crafted from sardines with eyes staring into your soul for their time has clearly run out; that the stiletto boot has been stitched together using ark clam shells with a fish head tip. Michiko Kon’s work is simultaneously seductively beautiful and shockingly disturbing. “Michiko Kon: Cannibal Feast” presents a collection of platinum palladium prints from the 1990’s in which Kon draws on her powerful imagination to create a tension between the real and the imagined, subtly manipulating the perceptions and sensations of her viewers.

Michiko Kon’s dreamlike work parallels the intentions of the surrealists, specifically when looking at the work of Meret Oppenheim. “Cannibal Feast” (1959) a significant work by Oppenheim which inspired this exhibition’s title, featured a live woman (later replaced by a mannequin) garnished with fish, fruit and nuts. Oppenheim set the table with cutlery, inviting the spectator to a cannibal feast, a lavish celebration of life, love and mortality with the intent to provoke a mixture of pleasure and discomfort. Michiko Kon takes influence from these ideas and builds upon them through the use of photography as her means of expression. It fixes the process of transformation she engineers with numerous elements which were once “alive.” Although these creations are not actually alive, they are not complete corpses either.

Many of the objects she photographed model luxury goods favored by wealthy Japanese people during the height of the Bubble Economy, fedora hats, designer furniture and clothing, even melons, that still today sell for exorbitantly high prices on the streets of Tokyo. By creating them from fish and other living things eaten daily by the residents of the city, Kon confronts the intense consumer culture of modern urban Japan. The work also comments on certain expectations of women in society such as preparing family meals. Kon challenges these views when her visits to the fish markets and butchers outwardly look like she’s cooking feasts for her family when in reality she is using the objects to construct sculptures that hang in mid-air, in the ambiguous region between life and death.

Michiko Kon was born in Kanagawa, Japan, in 1955. She attended Tokyo Photographic College from 1978 to 1980, after studying painting and printmaking at Sokei Art School. Her first solo exhibition, “Still Life” in 1985 was at the Shinjuku Nikon Salon in Tokyo where she was soon recognized as one of the most innovative photographers working in Japan. Kon was the recipient of the prestigious Kimura Ihei Prize in 1991. Her first exhibition in the United States was held at the MIT List Visual Arts Center in 1992. Her work was included in the “History of Japanese Photography” exhibition organized by Anne Tucker at the Museum of Fine Arts, Houston, in 2003. Michiko Kon’s work has been exhibited in and held in the collections of many museums around the world, including The Art Institute of Chicago, Chicago, IL, National Gallery of Canada, Ottawa, Ontario, Tokyo Metropolitan Museum of Photography, Tokyo, Japan, Center for Creative Photography, University of Arizona, Tucson, AZ, Museum of Vincent Van Gogh, France, Museum of Fine Arts, Houston, TX, The Art Gallery of New South Wales Australia, National Museum of Modern Art, Tokyo, Japan, Cleveland Museum of Art, Cleveland, OH, among many others.