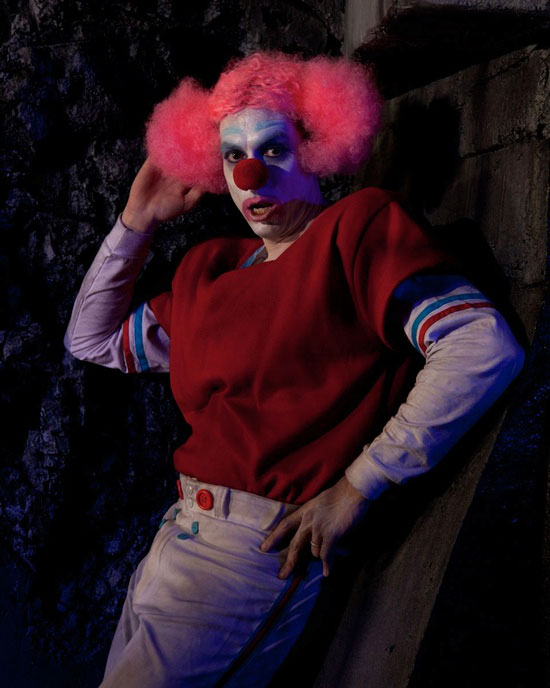 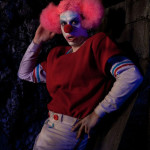 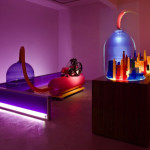 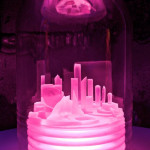 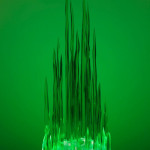 Hauser & Wirth is proud to present ‘Mike Kelley’, the gallery’s first exhibition devoted to one of the most ambitious and influential artists of our time. Organized in collaboration with the Mike Kelley Foundation for the Arts, the exhibition is the first in New York to focus exclusively on one of the most significant of Kelley’s later series, ‘Kandors”. These visually opulent, technically ambitious sculptures combine with videos and a sprawling installation never before exhibited in the United States, as the late Los Angeles artist reworks the imagery and mythology of the popular American comic book hero, Superman, into an extraordinary opus of nurture and loss, destruction, mourning and – possibly – redemption.

Kelley’s ‘Kandors” (1999, 2007, 2009, 2011) is named for Superman’s birthplace, the capital of the planet Krypton. According to the comic book legend, Superman’s father Jor-El sent his infant son to safety on Earth before Krypton’s destruction, saving his life but inadvertently sentencing Superman to a future of displacement, loneliness, and longing. Superman grows up believing that Kandor was destroyed, but later discovers his real home still exists: Kandor was stolen by intergalactic archvillain Brainiac prior to Krypton’s demise, shrunken to a miniature metropolis, and left trapped inside a glass bottle. Superman ultimately wrestles Kandor away from Brainiac and hides it in his Fortress of Solitude, sustaining its citizens with tanks of Kryptonic atmosphere. As Kelley once explained, Kandor functions for Superman as ‘a perpetual reminder of his inability to escape the past, and his alienated relationship to his present world.’

Over the course of his four-decade career, Kelley (1954 – 2012) produced a provocative and rich oeuvre that included drawing, painting and sculpture, video and photography, performance, music, and a formidable body of critical writing. Kelley’s art conflates the highest and lowest forms of popular culture in a relentless critical examination of social relations, cultural identity, and systems of belief. Mingling the sacred and profane, the banal and absurd, the innocent and perverse, the comic and the tragic, Kelley’s art launches an assault on the purity of aesthetic convention, spearheaded by the artist’s dark humor. Engaging themes as varied as adolescence, educational structures, sexuality, religion, post-punk politics, pop psychology and repressed memory, Kelley works through the turbulent conditions of the American vernacular to reveal unexpected connections and expose the defaults, tensions, and contradictions that make it up.

While Kelley’s ‘Kandors” series relates to the artist’s longstanding preoccupation with memory, trauma, and repression, these works are also powerful vehicles for the formal investigations of color, light, and scale that marked the last decade of the artist’s life. Kelley even described works from the series as being ‘akin to paintings by Henri Matisse’, but sculptural and in three dimensions. By focusing exclusively upon Kandors, the exhibition at Hauser & Wirth offers viewers fresh insight into the formal challenges, popular cultural references, and psychological states Kelley prioritized in his last years.

Entering the exhibition at Hauser & Wirth, visitors encounter a group of vitreous sculptures glowing in a dimly lit room. Cast in resin, these miniature metropolises representing the city of Kandor create an optically dazzling spectacle rendered in a palette of refracted colors. Visitors continue through the space to find ‘Kandor 4’ (2007), in which Kelley has abstracted and reinterpreted the narrative of the fictive city in a complex amalgamation. ‘Kandor 4’ comprises three cities standing on a plinth, illuminated from beneath, with their towering architectural skylines bathed in tones of yellow, red, and blue. The fantastical cities are juxtaposed with an ultraviolet glass bottle resting on a yellow base, connected to a gas tank and hose intended to evoke the life sustaining vapors Superman used to keep the citizens of Kandor alive beneath their glass bell jar. In the final component, a video projection depicts ‘Bottle 4’ with an array of swirling atmospheric and light effects inside it, accompanied by an otherworldly soundtrack composed by Kelley.

Each unique representation of ‘Kandor” in the exhibition derives from one of the many illustrations of the city by various artists in the Superman comics, beginning with ‘Action Comics #242′ (July 1958). Intrigued by the stylistic and architectural inconsistencies that marked Kandor’s representation in the ensuing half century, Kelley selected 20 strikingly diverse illustrations from the original comics’ panels. He manipulated and superimposed the designs and colors of these illustrations, which he enlarged to life-scale and employed to create a group of lenticular light boxes. A selection of these light boxes illuminates the darkened hallway leading visitors to the exhibition’s innermost room and most significant element: ‘Kandor 10B (Exploded Fortress of Solitude)’ (2011).

The climax and coda to the Kandors series, ‘Exploded Fortress of Solitude’ is a cavernous installation spread across the gallery’s main space. Exhibited here for the first time in the United States, this epic work is presented together with the video ‘Extracurricular Activity Projective Reconstruction #36 (Vice Anglais)’ (2011), an unsettling but humorous satire that collides psychosexual and sadomasochistic drama with a repertoire of parodic clichés derived from British Hammer Horror films. The blackened exterior of Kelley’s monumental fortress contains a dimly lit cave-like environment surrounded by fragmented boulders, a gas tank, hoses, a buck, and chains, evoking a haunting sense of unease and menace. Here, the artist shifted his formal investigations from color, light and transparency to ambitious sculptural gestures inflected by darkness and opacity. ‘Exploded Fortress of Solitude’ is a ruin of textured, black-hued, faux boulders and slabs that draws viewers inside by the sheer force of its scale and mystery, while the murmuring acoustics of ‘Vice Anglais’ layer the atmosphere with tension and anticipation. In the video, the ‘Exploded Fortress of Solitude’ serves as the backdrop for the exploits for Kelley’s gang of perverts; visitors exploring the cave are likewise subjected to the unsettling whimpers and debauchery of the ‘English Vice.’

One of the final works of the Kandors series, ‘Exploded Fortress of Solitude’ suggests a dramatic denouement for the fated city, a possible catharsis not only for Superman but for Mike Kelley and for us. It emblematizes the extraordinary articulation that preoccupied Kelley in the years before his untimely death, between his two great serial enterprises of the 21st century, Kandors and the Extracurricular Activity Projective Reconstructions (of which ‘Vice Anglais’ was the 36th and final installment, along with its pair, ‘EAPR #36B [Made in England],’ in which the dialogue of #36 is spoken by a variety of mostly ceramic objects ‘made in England’). From within the depths of Superman’s fortress, the visitor is reunited with the city of Kandor, now rendered as a glowing rose-colored emanation encased beneath a bell jar. Eerily illuminating the darkness of the rocky chamber, the roseate Kandor reveals that the crevices of Superman’s solitary sanctum sanctorum actually glitter with tiny gold trinkets. The Fortress of Solitude has indeed exploded. Chaos has triumphed over order and long years of preservation have succumbed to galactic cataclysm – but we are left with a pot of gold. At the limit of loneliness and trauma, in an uncanny archaic place, we encounter a glittering symbol of duality – of hope and life, of wealth and greed.

Mike Kelley (b. Detroit 1954 d. Los Angeles 2012) is widely considered one of the most influential artists of our time. Irreverent but deeply informed, topical yet visionary, Kelley worked in a startling array of genres and styles, including performance, installation, drawing, painting, video, photography, sound works, text, and sculpture. He also worked on curatorial projects; collaborated with many other artists and musicians; and left a formidable body of critical and creative writing. Starting out in the late 1970s with solo performances, image / text paintings, and gallery and site-specific installations, Kelley came to prominence in the 1980s with a series of sculptures composed of common craft materials. Featuring repurposed thrift store toys, blankets, and worn stuffed animals, the ‘Half a Man” series focused Kelley’s career-long investigation of memory, trauma, and repression, predicated on what the artist described as a ‘shared culture of abuse.’