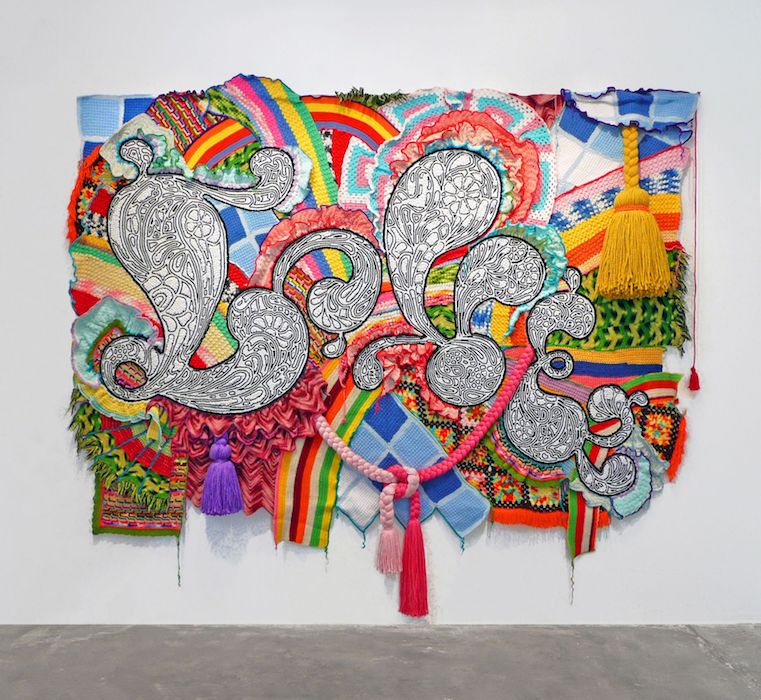 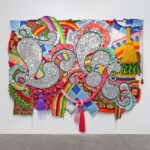 “The work of art created as a labor of love may sound cynical, yet it is made in good faith and contains a deep utopian wish for social change, no matter how naive and nostalgic that dream is.” (Miyoshi Barosh)

Luis De Jesus Los Angeles is very pleased to announce “Miyoshi Barosh: Love”. This exhibition marks the artist’s third solo show with the gallery.  Concurrent exhibitions honoring the life and work of the late Los Angeles artist, who died in 2019, will be held at Night Gallery in downtown LA and The Pit in Glendale.

Over the last fifteen years, Miyoshi Barosh made her work with humor and dystopian irony in a style she called “Conceptual Pop.” With an emphasis on cultural blindness toward death, decay, and the disintegration of both utopian social constructs, and ultimately the individual body itself, Barosh saw her work as “a manifestation of competing emotions around cultural conceits and identity politics through a handmade carnivalesque, mischievous confrontation.” Given her untimely death, her message is made even more poignant, if not tragic, because she lived it.

Introducing “Delirium,” her first solo exhibition with the gallery in 2008, Miyoshi Barosh declared: “My work collides the domestic world of craft with the muscular images of Pop in signs: maps, banners, billboards, and roadside attractions. Like figures of Paul Bunyan, concrete dinosaurs, giant donuts and circus billboards, I want the work to share that sense of crazed exuberance, a bid for attention that contains a simple expectation of attracting attention. There’s a pre-technological innocence to those somewhat crudely constructed signs that is honest because the gag is so obvious that you’re in on it.”

Barosh’s use of vernacular craft processes and folk traditions in combination with digital technologies was made with both comic irony and heartfelt sincerity. On exhibit at Luis De Jesus Los Angeles will be her seminal tapestry “LOVE”, 2007; “I Keep Going On”, 2008; “Arcadia (happiness plays on shuffle 24/7)”, 2013; “I ♥ Kitties”, 2014; and several paintings from the “Portraits for the Home” series, 2011, as well as studies on paper. Ideas about love, which in one form or another are emblematic of this conceit, is the conceptual thread that runs through all of the works in this exhibition.

“LOVE” was the first large-scale work that Barosh created using repurposed afghans – those lonely and discarded, hand-made blankets which “in itchy, acrylic coziness embody feelings of dependency, obligation, and guilt.” Together with “I Keep Going On”, these collaged and crocheted pieces play on the notion of a “labor of love.” Making afghans is traditionally a women’s craft that, according to the artist, refers to both the “ideal of self-less love and to the idea of unconditional love, that is expected of, but not a reality of, family.” These pieces are “deliberately imperfect, damaged, and irregular like the human condition, pulled by conflicting desires for independence and dependency, freedom and obligation.”

“Arcadia (happiness plays on shuffle 24/7)” is an assemblage of accumulation, consumption, and destruction – a folksy-crude parody inspired by computer gaming, Spotify, and home videos of cats from YouTube. In this mediated experience of nature, reduced to floral-patterned fabrics and digitized kittens, animals are consumed as constructs of cuteness, an addictive escape to an interiorized “happy place.” The images of the kittens reflect a culturally induced need for self-medication. An extension of the ideas elaborated in “Arcadia”, “I ♥ Kitties” are layered, screened, Instagram-perfected reproductions of captured kitty heads, the new celebrity icons of the digital age, at once eye candy and hypnotic drug.

In speaking about her work, Barosh said, “Questions of value including perceived aesthetic value, are part of the narrative. Ideas about originality and authenticity are mocked while pointing to larger cultural failures that have to do with consumption and ecological disaster. I talk about materialism, accepted notions of value, and resulting anxieties through my work – subjects that are relevant to everyone. While socio-economic questions are raised around ideas about women’s labor and value in the use of craftwork, ‘value’ also becomes a projection of ourselves onto things like cute animals on the Internet, mythic American landscapes, and the built environment.”

Miyoshi Barosh (1959-2019) made work in a wide range of materials and techniques that humorously expose the socio-political underpinnings of American culture. Her work has been exhibited in New York and Los Angeles, at Luis De Jesus Los Angeles, and The Pit in Glendale. Recent exhibitions include “Thread”, Long Beach Museum of Art (2019) and “Material as Metaphor” at the former Craft & Folk Art Museum, now Craft Contemporary (2017). Notable exhibitions include the 2015 “C.O.L.A.” Exhibition, Los Angeles Municipal Art Gallery at Barnsdall Park, Los Angeles; “Body Conscious: Southern California Fiber” at the Craft in America Center, Los Angeles; “Women, War, and Industry” at the San Diego Museum of Art, and “The Small Loop Show” at the Fellows of Contemporary Art in Los Angeles.

Barosh was a 2015 recipient of both a Guggenheim Artist Fellowship and the City of Los Angeles Individual Artist Fellowship (C.O.L.A) and an Artist-in-Residence at the Pilchuck Glass School.  After receiving a BFA in painting at Rhode Island School of Design, she moved to New York, where she became the first Managing Editor of BOMB magazine. Upon receiving an MFA from the California Institute of the Arts, Barosh became involved with A.R.T. Press, publishing and editing her own arts journal, “Now Time”, as well as becoming involved in the artist collaborative, “Project X”.  She died in Long Beach last February and a memorial in her honor was held at Craft Contemporary in Los Angeles in July 2019.