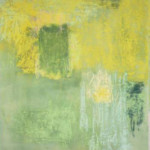 Parasol unit foundation for contemporary art is delighted to present a solo exhibition of paintings by Monique Frydman. Shown for the first time in a public institution in the United Kingdom, this exhibition surveys over thirty years of the French artist’s career.

Monique Frydman’s abstract paintings are a vibrant embodiment of colour and light. Soft lines are produced through frottage, a technique for which the artist rubs pastel on to an unstretched canvas that has been placed over a tangle of cord or string, then often completes a work by adding pigment to the surface. The elegant arabesques of lines created by this process blend into the colour-saturated canvas. Only from the 1980s onwards did Frydman start to use intensely rich colours, especially deep dark reds and blues, in her work. By the latter part of that decade she was making works of dazzling luminosity, paintings that have a subtle relationship to the works of artists she admired, such as Claude Monet, Pierre Bonnard and Matisse.

In the opening gallery of the Monique Frydman exhibition is “L’Absinthe”, 1989, a monumental triptych painted predominantly in luminous hues of green and yellow juxtaposed with areas of white and pink. Its light-drenched green, the colour of absinthe – an alcoholic drink much favoured in the bohemian circles of Paris during the late nineteenth and early twentieth centuries – calls to mind the “Water-Lilies” series of Impressionist paintings by Claude Monet. Another major work is her double-sided “Polyptyque Sassetta”, 2012-2013, which in 2014 was exhibited in the Louvre’s Salon Carré. It was painted in homage to the work of the early Renaissance artist Stefano di Giovanni, generally known as Sassetta, who created the “Borgo San Sepolcro Altarpiece” (1437-1444), a masterwork composed of 60 panels, many of which have since been dispersed, lost or irreparably damaged. Although Frydman’s panels are apparently without figuration, they somehow convey a compelling human presence.

Elements of structure are integral to Frydman’s works and have a rapport with the entire surface of colour. Informed by the work of Pierre Bonnard, Frydman completed a series of paintings entitled “Des saisons avec Bonnard”, 2009-2010, abstract works with overlapping planes of colour that not only evoke the seasons but also the planes of colour evident in Bonnard’s works. Although abstract rather than figurative, the presence of structure could be interpreted as traces of the past.

Curated by Ziba Ardalan, the Monique Frydman exhibition is accompanied by a full programme of educational events aimed at involving the public.