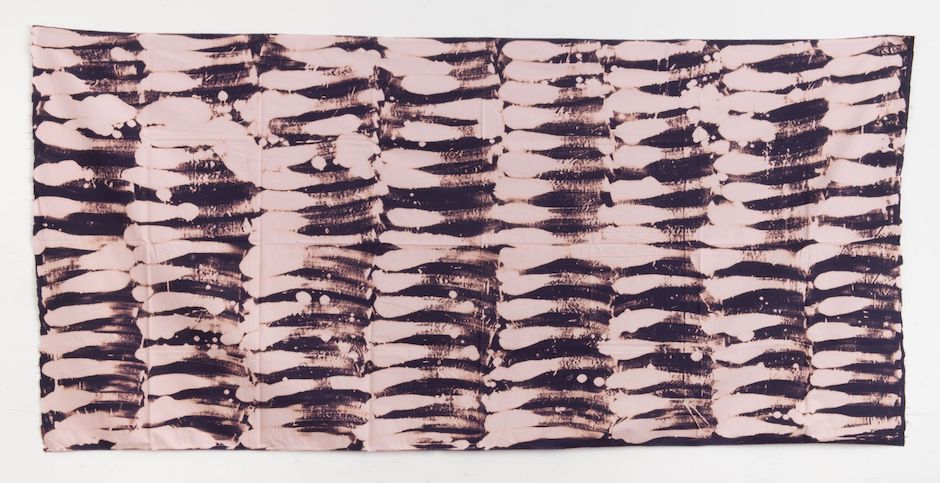 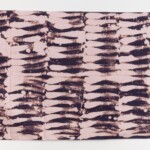 Freight + Volume is thrilled to announce “Natalie White: The Bleach Paintings”, an exhibition of a new body of work by Natalie White.

Confronted with the closures that followed in the wake of COVID-19, Natalie White had to rethink her artistic practice. Restrictions had tightened around the studio spaces she would normally use, which also affected the sort of work she could develop. As an artist and activist, this was frustrating. Activism, whether in art or politics, can only exist to the extent that it can collectively communicate. Asserting radical ideas, making impossible demands, or simply working to achieve grassroots goals – all of this was suddenly put on pause. But if White’s activism couldn’t work against and interfere with the lives of a stubborn majority, then her art also might as well withdraw to the quiet of a secret diary.

In a way, this is what Natalie White did. Out of a kind of impassioned frustration, she started to work on what was for her an unprecedented body of work. Basically, she became a painter. Only rather than utilize materials like oils or acrylics on canvas, she set to work with far less conventional materials. Bleach and bedsheets became her oil and canvas. The novelty of this wasn’t so much a compromise as an exigent response to the effects the global pandemic has had on White personally, as well as many others worldwide.

The lingering specter of solipsism reemerged over the course of the past year. Before COVID-19, even when artists were critical of the status quo, they could at least rely on its predictability, and find ways to publicly platform their critiques. No sooner did lockdown become a thing, than the status quo appeared less reliable than ever.

Even as governments worldwide struggled to enact beneficial policies, new edicts were imposed that made the performance of social life almost dangerous. The value of an artistic message was replaced by the threat of replicating a virus. As more and more galleries turned to the Internet as a platform to stage exhibitions, the phrase “going viral” took on a new meaning. The digital screen was the only way that people could be seen now, or declare their allegiance to a cause. All this adherence to the image of community, tethered to emojis and hearts, was a sign of a not-so-good sign.

But White, as an artist, discovered a different kind of performativity: painting as the performance of withdrawal. Infused with a sense of urgency, she took household materials (found textiles taken from her bed; bleach, whose noxious fumes would burn her nostrils while staining the sheets with weird, mucilaginous colorings) and made works that are neither image-based nor abstract, but allegorical depictions of strange expenses that appeal to the viewer’s subjectivity.

A work like “Reality”, for instance, which derives from a series of works White has titled “Galaxy”, shows a kind of star-patterned vista – like a photograph captured by the Hubble telescope. And yet, in the facture of the painting, there’s a gestural quality that can’t be produced by a photograph alone, no matter how powerful the lens. In the casual way circles shape themselves against the black backdrop or splatters drip across the surface, there’s a kind of commanding presence, an authorial hand that the scientific understanding of the universe simply can’t account for. Creating these kinds of works, White seems to imbue the universe with a vitalistic meaning – giving it a form, a pattern, a meaning that is not only unobservable but which speaks to the loss of control we have all felt throughout the course of this pandemic.

In another work, “Suspend Orthodoxy”, the pacing of the marks almost resembles the scratches prisoners make in walls to keep track of time. Only here, the markings are less quantitative than purposeful. White recovers herself through them. Imposing gestural, deliberate, and purposeful markings onto the ambiguity of lost or frozen time, she creates a new order in place of the old one. Similar to her activist work, an envisioned ideal takes hold of the established order. The weirdness of time experienced under quarantine and in isolation is here transformed into a studious reckoning with what it means to be an artist. Without necessarily modeling her works on any one painter, White has created open-ended pictures that not only recount, in an almost diaristic way, her inner experiences during the pandemic but which equally open themselves out to the inner experiences of the viewer, who shares with White the same sense of dead time, animated by a desire to make the most of what is available in an anhedonic world bereft of schedules.

Feminist by nature, a riot by habit. Natalie White is a provocative and progressive feminist and artist, first known for her contribution as a “Muse” to the work of many of today’s art and fashion luminaries. Her creative drive and unapologetic spirit have led her to collaborative ventures with artists such as Peter Beard, George Condo, Olivier Zahm, Michael Dweck, Will Cotton, Spencer Tunick, and Sean Lennon.

Growing up in a small town in West Virginia, Natalie first gained attention internationally as a young model, featured on the covers of numerous European Magazines. Never one to shy away from the risque, she was also the first American to receive a feature spread in French Playboy (2010).

In 2013, at the “Who Shot Natalie White?” show, amidst a retrospective of 25 different artists for whom she has been a muse, Natalie debuted herself as a solo artist. Through a series of double exposed Giant Polaroid nudes, she redefined herself as “her own muse.”

As a leader in female empowerment and self-affirmation through art, Natalie also works in activations for women’s rights. She has performed at the “Art Basel Miami Women in Art Benefit” in collaboration with the Brooklyn Museum’s Elizabeth Sackler Center, as well as the Natalie White for “Equal Rights” show at the Hole in 2015 and a 2016 follow-up at the WhiteBox Foundation for the Arts. In July 2016, she led a 16-day, 250-mile march from NYC to DC promoting the fight for inclusion of The Equal Rights Amendment to the Constitution.