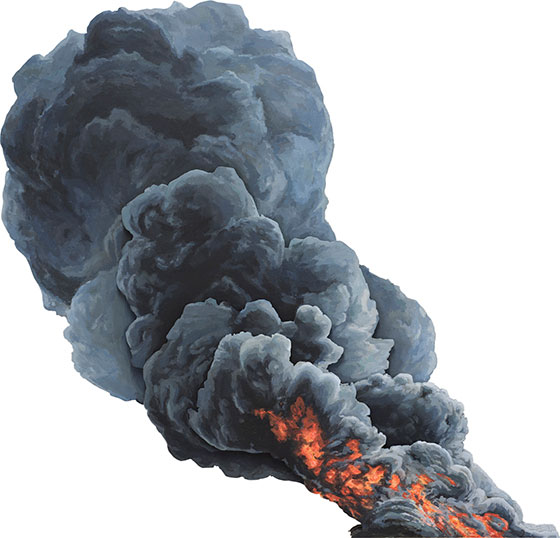 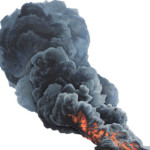 “We were in Paris, and had just finished lunch when my brother messaged me to ask if I had heard the news, about the fire. I got back to him saying that wasn’t something to joke about. He sent me a link to it on BBC news, and the terrible images were in my hand.

I sat in shock, with tears in my eyes, at the sight of the flames ripping through the roof, and thick black smoke engulfing that so familiar building. How could this be happening? We couldn’t stop looking. It was irresistible, compulsive. Perhaps the most shocking thing about the image was its inevitability – unbearable and unbelievable but also as if foretold.”

Parafin is delighted to announce its first exhibition with British artist Nathan Coley (b. 1967, Glasgow). The exhibition is Coley’s first in London in five years and coincides with his biggest public project to date, a major new work installed across ten sites in the Central Denmark Region for the year long cultural project “Aarhus2017”.

Coley is interested in the idea of ‘public’ space, and his practice explores the ways in which architecture becomes invested – and reinvested – with meaning. Across a range of media Coley investigates what the built environment reveals about the people it surrounds and how social and individual responses to it are in turn culturally conditioned. Using the readymade as a means to take from and re-place in the world, Coley addresses the ritual forms we use to articulate our beliefs. Whether highlighting in illuminated letters the five ‘rights of man’ under Islam, or deconstructing Shaker furniture, his work frequently turns the specific into the general, thereby testing its function as a form of social representation.

Coley’s exhibition at Parafin includes new sculptures and text works. The centerpiece of the show is a major new sculptural work, “Tate Modern on Fire” (2017). This work is a companion piece to “Paul” (2015), which depicts St Paul’s Cathedral. The two buildings face each other across the Thames and in doing so establish a complex relationship – between past and present, religion and culture – at the centre of London. While St Paul’s is an iconic religious building, a symbol of London and of the city’s endurance during the blitz, Tate Modern is, it might be argued, a secular cathedral for the twenty-first century. In Coley’s works, both buildings are rendered as architectural models which, while complete from the front, are open at the back and filled with associative objects in the manner of a wunderkammer or a cabinet of curiosities.

While the work questions the status of the institution, as with all Coley’s work a rich and complex ambiguity pervades. Is the fire a proposal or a warning? On reflection, what at first seems an act of wilful cultural iconoclasm is revealed to be a more open proposition. Furthermore, at a time when cultural institutions are deemed viable targets by terrorist groups such as IS, the image of a prominent public building on fire carries a host of troubling associations.

The sculpture also references Ed Ruscha’s controversial painting, “The Los Angeles County Museum of Art on Fire” (1965-68). When that painting was first exhibited Ruscha was asked if it articulated a desire to burn the museum and its contents. Ruscha said, ‘No, but if you want to see that as a political painting, you can – a revolt against an authority figure.’

The exhibition also includes “Palace” (2015), one of Coley’s signature large-scale illuminated text works, and a group of new sculptures which deconstruct self-assemble Shaker furniture. The Shakers adhere to guiding principles of simplicity, utility and honesty and their beliefs are reflected in the pared down forms of their furniture. In these works Coley addresses the conflation of domesticity and religious belief.

Coley’s work is included in many collections worldwide. Coley was shortlisted for the the Turner Prize in 2007.