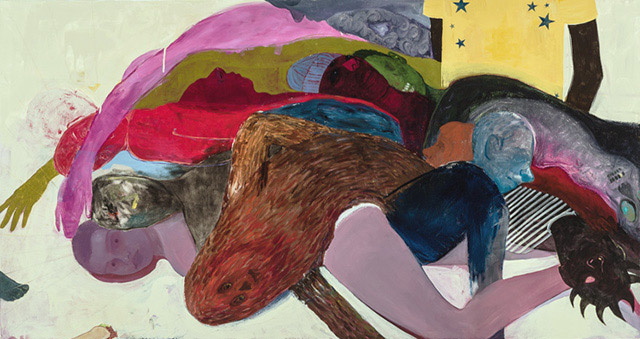 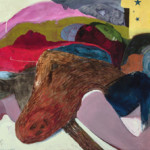 Thierry Goldberg is pleased to present “Visitors”, an exhibition of new paintings by Naudline Pierre. This is the artist’s first solo exhibition..

Naudline Pierre’s paintings exist as portals into a mysterious world. Through the creation of a parallel reality, she arranges her experiences, anxieties, and longings into harmonies of color and texture that are often just as aggressive as they are beautiful.

Drawing reference from the practice of anointing – an emblematic blessing for protection and empowerment, or the act of consecration – the paintings borrow the symbol of laying hands and the act of bodies touching bodies to explore the complexities of existence. Through accessing her personal mythology, Naudline creates intimate, otherworldly scenes where a cast of characters are in close contact with her shadow self. These characters are visitors, they are guardians, they are demons, they are concoctions of dreams, teachings, desires, and even fragments of the artist’s shadowy alter-ego.

Naudline Pierre (b. 1989, Leomister, MA), currently lives and works in New York. She holds an MFA from the New York Academy of Art and a BFA from Andrews University. She was the recent recipient of the Terra Foundation for American Art residency in Giverny, France, and the Estèe Lauder Merit Award. Her work has been included in group shows at the New York Academy of Art and Andrews University, as well as the Siegfried H. Horn Museum in Michigan.