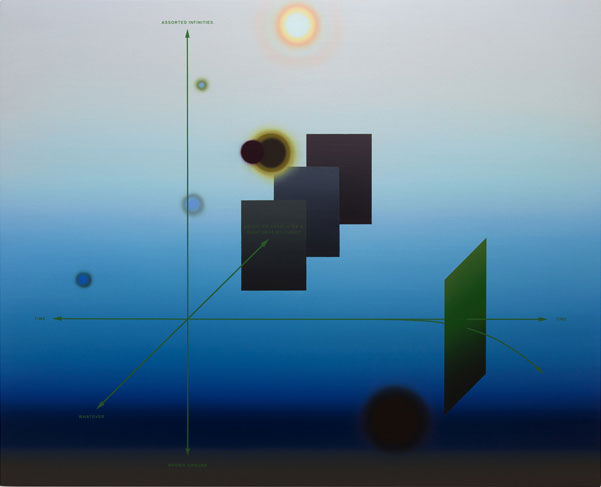 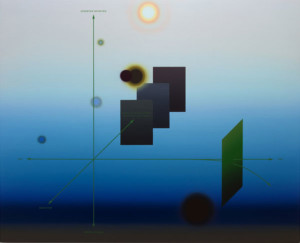 Luis De Jesus Los Angeles is very pleased to announce “Dumbfounded Prophets”, an installation of new paintings by Nicolas Grenier. This will be the artist’s second solo exhibition with the gallery.

Over the last eight years Nicolas Grenier’s practice has evolved into an ecosystem that includes paintings, architectural installations, lecture-performances, and experimental economic models. In “Dumbfounded Prophets”, Grenier continues his ongoing investigations into the aesthetics of abstraction in relation to systems of power and its effects on the individual and society. Informed by his multidisciplinary approach, Grenier has integrated a meticulous crafting of color and pictorial space with a deft understanding of diagrammatic language sourced from architecture and design, management strategies, and theory.

Grenier’s paintings combine and reshape visual signs employed by corporate entities, belief systems, and regimes of power that dominate the neoliberal society. Each painting presents ideas, theories, or emotional states/sensations that rely on various strategies of organizing space – pictorial, digital, graphic, schematic, cosmic, perspectival – in order to communicate the complexities of mediated human experience. Some of the narratives unfolding in these highly ordered surfaces depict complex systems of thought and knowledge while others show seemingly minimal compositions with latent symbolic implications. All arrows point to the challenges of being a political individual in the world today.

Grenier’s work addresses the philosophical and moral dimensions inherent within political thought and action, including the navigation in and around the theory and/or practice of activism, violence, inequality, entrepreneurialism, and self-determination. Grenier identifies moments when the attempts to control meaning through form reveal ideological idiosyncrasies and he didactically pushes them to their logical conclusions. His paintings reveal the honesty, absurdity, beauty, and dangers of rationalization and dogmatism – exemplified in the margins of the painting “Perspectives” (2018) by an unidentified narrator who implores:

DON’T GET SO ANGRY AT THEM, THEY’RE JUST CAUGHT UP IN A PERSPECTIVE THAT’S SO DIFFERENT FROM YOURS, THEY DON’T SEE THE HARM THAT THEY’RE DOING.

In “Dumbfounded Prophets”, Grenier situates art as a tool to analyze the discrepancies between theory and practice.

Nicolas Grenier (b. 1982, Montréal, Canada) received his MFA from California Institute of the Arts in 2010 and BFA from Concordia University in 2004. He also attended Skowhegan School of Painting and Sculpture in 2016. Grenier’s work has been included in the 2015 Brugges Triennale in Belgium and the 2014 Biennale de Montréal at the Musée d’Art Contemporain de Montréal. He has been exhibited in the US, Canada, and Europe, including “Precarious Geographies” at Galerie Antoine Ertaskiran, Montréal; “Giles” at Gagosian Gallery, Athens; “The City And The City” at Denny Gallery, New York; “Promised Land Template” at Commonwealth & Council, Los Angeles; “One Day Mismatched Anthems Will Be Shouted In Tune” at Luis De Jesus Los Angeles; “The Work of the Work” at University of California, Santa Barbara; and “Marginal Revolutions” at KUAD Gallery, Istanbul. In 2016 Grenier received the Prix Pierre-Ayot awarded by the City of Montréal and he currently lives and works in Montréal and Los Angeles.