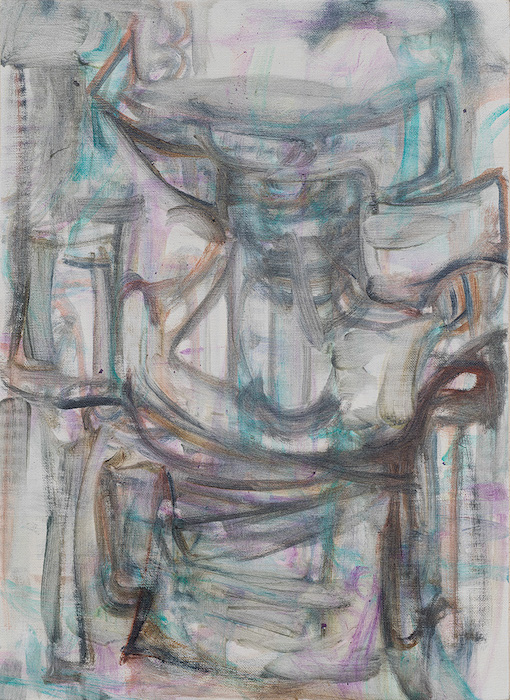 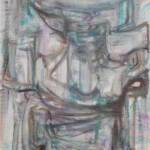 In order to not make dirt a buffer between line and ground, I treated ground, dirt, and line as a tripartite construction. Now that the three parts could be interchanged, I was able to continuously spin the picture.

To paint, using strokes, a canvas that is bigger than one’s reach, one must generally fill the surface using a pattern that uses the body like a ruler or a compass, or mark the canvas with movements that have been stretched and performed by a body extended with painting implements. In paintings clearly made by human physical movements, however, there is something not captured in the two methods described above. Confronting such paintings, I concluded that one must consider, not how a picture can be painted naturally by an individual body, but rather, how to obtain an unnatural “painting body” that responds to demands made by a picture. A long time has passed since I came to this conclusion. Nobuya Hoki (excerpted from August 2019 artist statement)

Nobuya Hoki has further evolved his unique technique of painting with two brushes simultaneously to create doubled lines comprising color separations of black – one dark blue and one reddish brown. For many years, Hoki has addressed the themes of “ground” and “scale” in his works. Since 2012, he has inserted “dirt” into the ground, which had hitherto been understood as a neutral space in and against which figurative lines created forms. His latest work, based on the new idea that the roles of dirt, line, and ground are determined posteriori through their relation, realize a complex spatiality. Additionally, focusing on the physicality of abstract painting, Hoki has started to produce canvases of various sizes. The creative lines and forms, and their relation, indicate the physicality of the work as well as potential plentitude of painting.