On the Periphery of Vision – curated by Christopher Phillips 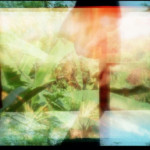 Jane Lombard Gallery is pleased to present “On the Periphery of Vision”, a group exhibition curated by Christopher Phillips. The exhibition features works in a variety of mediums – painting, drawing, sculpture, photography, film and video – by five artists: Bae Youngwhan, Michelle Charles, Koo Donghee, Shimpei Takeda and Apichatpong Weerasethakul. The artworks have been selected for their power to suggest a variety of familiar yet elusive experiences that lie just beyond the boundaries of perception. A thread of recurring themes and references runs through the works, inviting viewers to enter into the dialogue that connects them.

Apichatpong Weerasethakul‘s short film “Ashes” (2012) presents a vision of a world seemingly close at hand yet achingly out of reach. It was filmed with a Lomokino analogue camera – an inexpensive, hand-cranked 35mm movie camera that shoots 20-second film clips. Ashes opens with relaxed, home movie-style shots of a young man walking his dog in the Thai countryside, a girl riding a bicycle, a father and son whizzing by on a motorbike and close-ups of farm animals. Suddenly, the scene shifts to an unidentified city whose streets are filled with anti-government demonstrators. Then, just as abruptly, it shifts again to a lush green jungle setting. Halfway through the film, the opening sequences appear again, and Weerasethakul, in a voiceover, explains how the work arose. In a dream, he sought to capture some of his own dream images. “I reached out for a 2B pencil. I drew a picture on paper, my back to the dream. I kept turning back to look at the large images, trying to copy them, to mimic the colors. The picture I drew turned out to be of my hometown… I kept drawing and looking back, worrying that the floating dream would disappear. Then, the colors slowly disappeared. The dream turned black and white. I was sorry. I tried to remember the colors. I knew then that the dream was in color. My drawing was of my hometown in Khon Kaen.” In the film’s concluding moments, fleeting glimpses of the artist’s friends and scenes from his everyday life melt into a barrage of fireworks that illuminates the nighttime sky. A visual tour de force, Ashes effortlessly weaves together the mundane and the extraordinary.

Bae Youngwhan‘s “Ten Thousand Years’ Sleep (Black)” of 2010 consists of a set of black-glaze porcelain objects arranged on nine shelves in a plywood artist’s box. The porcelain forms, created by the spontaneous kneading motions of the artist’s hands, call to mind the rolling hills and valleys that figure so prominently in traditional Korean painting—and are still visible in the landscape surrounding Seoul. More surprisingly, these darkly gleaming forms also correlate with the undulating lines of the artist’s EEG (electroencephalogram) chart, which he often exhibits with this sculptural work, along with pen drawings based on his brainwave patterns.

Since 2012, Michelle Charles has produced a series of mesmerizing paintings, ink drawings and camera-less photographs based on the motif of crystal balls. These works bear out the late Dore Ashton‘s observation that Charles’ art has principally to do with the volatility of memory, and with its unpredictable residues. Her black-and-white camera-less photographs, made by a process that Charles prefers not to divulge, appear to result from what one might guess to be the application of a chemical-laden brush to a photosensitive support in a darkroom. These almost-photographic renderings of crystal ball-like orbs startle with their fluid forms and perplexing hints of dimensional illusion.

Koo Donghee‘s video work “Static Electricity of Cat’s Cradle” (2007) is a meticulously staged enactment of an unusual aerial coupling by a young man and woman. We see the young man wearing pajamas and holding a candle, enter a darkened room that quickly proves to be a theatrical set. He carefully climbs onto a creaking, expansive spring mattress. A young woman, also in pajamas, is sleeping there, surrounded by objects that include a makeup kit and a plush toy. While she continues to snooze undisturbed, he attaches hoist belts to each of them that are part of an elaborate web of ropes, hooks, and pulleys. Soon they are both jerked awkwardly into the air, the young woman still sleeping, in a kind of parody of a dream of flying. As they rise and fall in space, with their arms extended longingly toward each other, a rear-screen projection presents footage shot from an automobile gliding through anonymous urban vistas and past the low hills around Seoul. Eventually they manage to come together and embrace for a few seconds. In the work’s final moments, the camera pulls back to reveal the artifice of the stage and the hoist apparatus. With the young couple still dangling in midair, a cowboy-hatted stage technician nonchalantly switches off the projection and brings the illusion to an end.

After Shimpei Takeda moved back to Japan from the U.S. in 2014, he began to reexperience the gradual change of the seasons and to observe his natural surroundings more carefully. “I became fascinated by the techniques and materials used in arts and crafts that spring from a close relationship with the natural environment,” he has written, “such as natural dyes, pigments and natural glazes.” In his recent “Glaze” works, he has set out to devise a comparable approach using the materials of camera-less photography. He describes these prints as gelatin silver photograms, but the process that he uses to produce them is unique. “In this series, I capture natural processes, such as falling rain, melting snow and ice, or changes in the moisture content of soil, directly on photographic paper, exposing it under the sun, then using a chemical process to ripen it. Black and white photographic paper is normally monochromatic, but through exposure to daylight, it gradually changes color. Leaving it outside for anything from a few hours to months, the paper shifts to blue, pink, or purple. These differences of color are created by temperature, humidity, chemical substances in an object, and the amount of ultraviolet light. The raw images take on rustic colors – reddish brown, brown, or khaki – through a process employing specially prepared chemicals.” This process that he employs to make these mysterious, softly luminous works, he feels, “is very much like making ceramic glazes.”

Apichatpong Weerasethakul is an acclaimed film director, screenwriter, and film producer based in Chiang Mai, Thailand. His innovative filmmaking practice engages with the often fraught geopolitical territories of his native Thailand, as well as a seemingly mundane “everyday world” that is haunted by uncanny specters of collective history and personal memory. His feature films include “Tropical Malady”, which won a jury prize at the 2004 Cannes Film Festival; “Uncle Boonmee Who Can Recall His Past Lives”, winner of the Palme d’Or prize at the 2010 Cannes Film Festival; and “Cemetery of Splendor”, which premiered at the 2015 Cannes Film Festival. Weerasethakul’s more than three dozen experimental short films have been featured internationally at the Istanbul Biennial (2001), the Liverpool Biennial (2006), Documenta 13 (2012), and the Sharjah Biennial (2013). He has also taken part in exhibitions at the Haus der Kunst in Munich, Germany; the Walker Art Center, Minneapolis; and the New Museum, New York. “The Serenity of Madness,” a traveling exhibition of his experimental films, video installations, photographs, and sculptural works, was organized by Independent Curators International in 2016.

Michelle Charles is an artist who whose practice centers on painting and drawing, while also including cameraless photographs, films, and videos. After residing in the U.S. for almost two decades, she returned in 2001 to her native London, where she currently lives and works. Her work has been collected by such institutions as the British Museum; the Wellcome Trust, London; the Brooklyn Museum; the National Museum of Art, Washington, D.C.; the Addison Gallery of American Art, Andover, Massachusetts; and the Jerome Foundation, Minneapolis. She has received awards and fellowships from the Jerome Foundation, The Arts Council of England, the Wellcome Institute, and the Pollock Krasner Foundation.

Bae Youngwhan is an artist based in Seoul whose wide-ranging practice includes paintings, sculptures, photographs, videos, and installations. In addition to numerous solo exhibitions in Korea, he has taken part in group exhibitions at the Korean Pavilon at the 51st Venice Biennale (2005); the Tamayo Contemporary Art Museum, Mexico City (2009); the Minsheng Art Museum, Shanghai (2010); the National Taiwan Museum of Fine Arts (2011); the Asian Art Museum, San Francisco (2012); the Mori Art Museum, Tokyo (2013); the Sharjah Biennial (2013); the Seoul Mediacity Biennial (2014); the National Museum of Modern and Contemporary Art, Seoul (2015).

Koo Donghee is a Seoul-based artist who produces sculptural objects, installations, videos, and photographs. She learned video production while studying for her MFA at Yale University, and is known for videos in which puzzling situations interrupt the banality of everyday life. Her work has been shown at the Centre Georges Pompidou, Paris (2011); Plateau, Samsung Museum of Art, Seoul (2011); the Queensland Art Gallery, Brisbane, Australia (2011); the Schirn Kunsthalle, Frankfurt (2011); the Tokyo Metropolitan Museum of Photography (2012); Tate Modern, London (2015); National Museum of Modern and Contemporary Art, Seoul (2016); Sharjah Biennial 13 (2017); and the Rockbund Art Museum, Shanghai (2018). Koo’s work is part of the permanent collection of the Seoul Museum of Art; the Centre Georges Pompidou, Paris; and the National Museum of Modern and Contemporary Art, Seoul. She was awarded the 13th Hermès Art Award by the Hermès Foundation Missulsang, Seoul (2012), and was a finalist for the Korean Artist Prize, Museum of Modern and Contemporary Art, Seoul (2014).

Shimpei Takeda is a Japanese artist working with photographic materials. After moving to New York City in 2002, Takeda collaborated with composers and sound artists through video works. In recent years, he has explored abstract aesthetics in conceptual photography. In 2014 he relocated to Japan, where he continues to pursue his projects. His works have been featured in exhibitions such as “A Different Kind of Order: The ICP Triennial” (International Center of Photography, New York, 2013), “In the Wake” (Museum of Fine Arts, Boston, 2015), “Camera Atomica” (Art Gallery of Ontario, Toronto, 2015), “About Time: Photography in a Moment of Change” (San Francisco Museum of Modern Art, 2016), and “Emanations: The Art of the Cameraless Photograph” (Govett-Brewster Art Gallery, New Plymouth, New Zealand, 2016), among others. His work is in the permanent collection of the International Center of Photography, New York; the San Francisco Museum of Modern Art; the Museum of Fine Art, Boston; the Kadist Art Foundation, Paris; and the Amana Photo Collection, Tokyo.