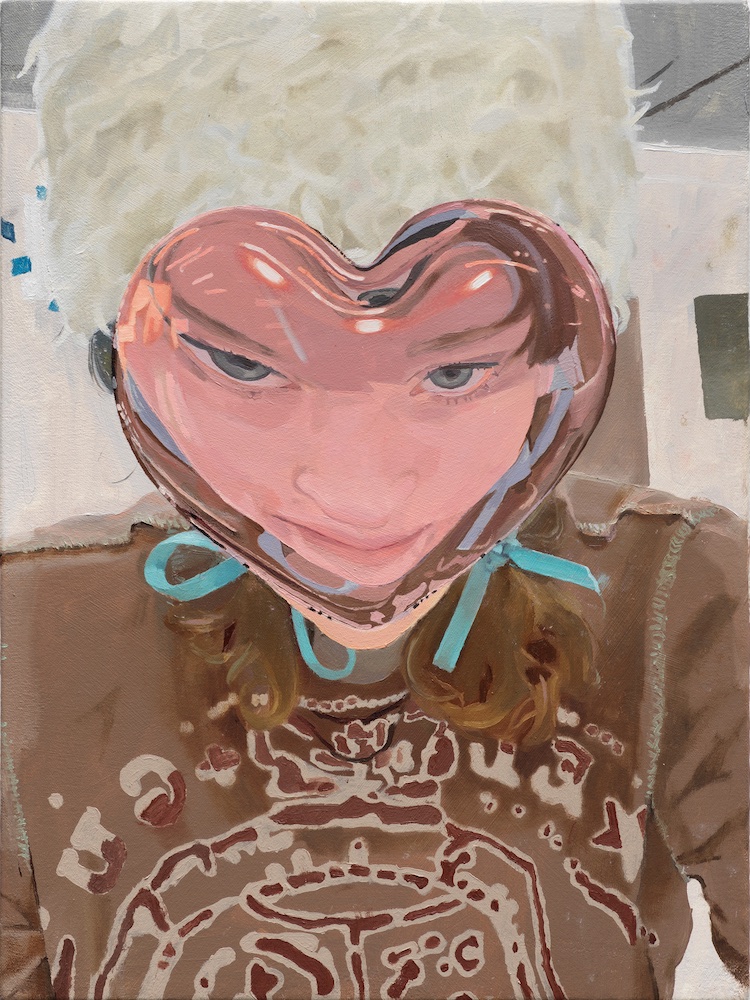 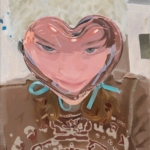 “Ordinary Instant” investigates the seemingly unremarkable moments in our lives, the ones that stand between nothing and everything. Bringing together seven artists who utilize a diverse sampling of mediums, styles, and perspectives, the exhibition collectively contemplates the ways in which we view ourselves, our surroundings, and our relationships. Moving narrative to narrative, the works as a whole evoke a fleeting sense of romantic nostalgia for both time and space.

Wallace Dibble (b. 1999 New York, NY) approaches portraiture as still life, reserving room for objects to obscure and reform space. Working from filtered selfies, Dibble utilizes the heart shape as an instrument of rediscovery allowing it to warp, bubble up, and twist her features. The distortion of her face permits Dibble to hide behind her own disfigurement, adding a translucent layer of privacy to her self-portraits. The objects that surround her become her defining factors as they foster a somewhat towering sense of clarity. There is a power that Dibble gives to these small interventions of the heart, its presence inflating over any intrusion or possible expulsion of vulnerability. The portraits collectively become quite humorous in their utter hopeless romanticism, exalting the often random, unrevealed, lonely moments of boredom where we become engrossed in recording ourselves.

Driven by an innate need to document, Chelsie Kirkey (b. 1987 Galesburg, IL) draws inspiration from the people and places that comprise her daily life. Working directly from personal photographs, Kirkey meticulously renders each work as a way to preserve the integrity of her memories. Her process is one that oscillates between control and embellishment as focused attention is placed on various minute details. Every color mixed and every line drawn is guided by a sense of rectitude resulting in compositions that are often caught between reality and recollection. There is a wistful snapshot quality to Kirkey’s paintings as if moments have been strung together and suspended in time. Moving from work to work, a thin thread emerges and weaves together these seemingly arbitrary moments giving way to a vulnerable, eccentric, and at times a comical narrative of the daily plight of existence.

Fascinated with depictions of women in consumer advertisements, Jessica Frances Martin (b. 1987 Phoenix, AZ) investigates the paradigms of feminity. Utilizing a pallet of bright oranges, soft pinks, watery blues, and vibrant yellows, Martins’s compositions reverberate with warmth and comfort. Her lithe figures, frequently depicted in pairs, bound across her compositions both weightless and flexible as they engage in everyday acts of play and exploration. Lending a graphic quality to her work, Martin often implements magnification and transparency as a tool to expose her subject’s inner and outer worlds simultaneously. A certain sense of innocence and freshness has been infused into the blank faces of her doll-like subjects. The vacuity of their stare becomes a subversive act of anonymity, a way to lodge and uphold these secret acts of camaraderie present in female relationships.

Lush landscapes and moments of closeness permeate Jay Miriam‘s (b. 1990 New York, NY) paintings. Her pallet is in constant flux as individual colors build upon each other informing each piece’s overall disposition. Miriam’s figures fill the canvas, bodies contorted and skin dappled making one acutely aware of their fleshiness. Encouraging moments of uncertainty, lines intersect and limbs intertwine in somewhat impossible ways. Her willowy figures emerge, highlighted by their background of rich blues and vibrant vegetable greens, lost in the dictation of themselves. There is a festivity to Miriam’s figures as they turn their heads to the sun or grasp a glass of wine, an inherent sense of letting go. Generating this fleeting sense of immediacy, Miriam’s paintings magnify tiny moments of self where time can become ritual.

William Schaeuble (b. 1999 Des Moines, Iowa) paints intimate dream-like scenarios that mark the passage of time. Drawing inspiration from the day-to-day, Schaeuble’s paintings serve as an echo of his recent recollections. Muted earth tones fill his compositions in flat washes of color, generating subdued landscapes that brim with feelings of sentimentality. Schaeuble’s long-limbed figures take over the canvas, often deeply immersed in the performance of their habitual acts of ritual and play. His figures dine, take walks, and engage with one another over what seems like an endless pool of time. Emanating a certain lived reality, Schaeuble’s paintings percolate with nostalgia for specific times, places, and feelings.

Fully seduced by the color red, Daphne Sweet (b. 1996 Los Angeles, CA) paints vibrant portraits of classically influenced female figures engaged in silent moments of introspection. Sweet relishes in the interplay between proportions and poses, often letting her preliminary mark-making serve as her guide. There is a fluidity to her figures, a light roundness determined by ever-so-subtle monochromatic variations. Graphic elements of plants, water droplets, and sun rays, define her figure’s environment often, detaching and recontextualizing them from their physical traditional arrangements. Her figures are depicted in a discorded state, often hinging upon the borderline of undeterminable private moments. It is these tiny unobtrusive moments that Sweet chooses to revere, ones where her figures can be light and lost within themselves seizing agency over their own narratives.

Lorenna Torres (b. 1991 Barranquilla, Colombia) creates surreal narratives that touch upon a collective history imbued with magic. Drawing influence from family anecdotes, Torres fabricates scenarios that are as magnetic and as amusing. Flowers, fruits, and patterns encircle her figures romanticizing their reality. There is a sense of indulgence present as figures engage with one another and their surroundings blissfully unaware of the passing of time. Torres’s works ache with a call for simplicity, for a time long past in a town unknown. For instances where we are truly present and for time to notice moments so minute they easily go ignored. Engaged in a constant pull between reality and reverie, Torres’s works allow memories to give way to a dream-like reality and for time to slow to a pause.