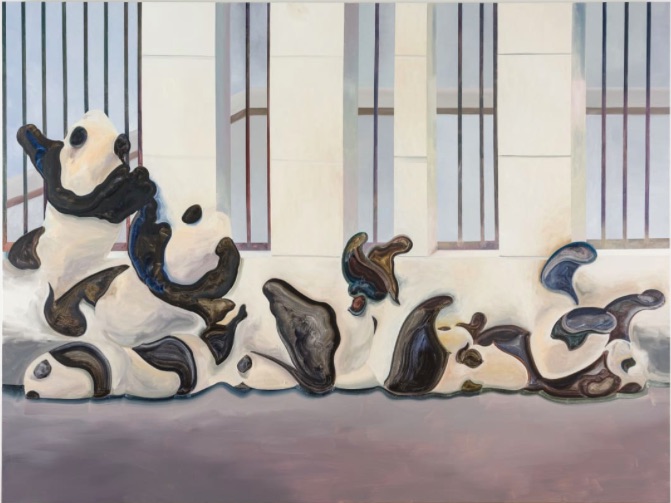 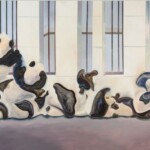 Simon Lee Gallery, Hong Kong is pleased to present “Out for Summer”, a concise exploration of the practice of painting, presented through the lens of nostalgia, a celebration of the quotidian, and of the fleeting, by artists Qian Jiahua, Guo Hongwei, and Lin Yi-Hsuan.

United by their personal, buoyant treatment of colour, line and form, each artist distinctly delivers paintings that are as introspective in their intimacy, as they are inviting in their warm approachability. Guo‘s paintings are imbued with the endless sense of adventure and fantasy inherent to summer. “Panda Variation” exposes a bizarre but amusing scene; a gaggle of pandas tumble one over the other, against a surprisingly stark, and seemingly random, background. The artist takes inspiration from reference images based on childhood photographs, enhanced by his technique of diluting his paintings to mimic the erosion, replacement and deletion of memories over time.

Meanwhile, Lin distorts form and line through abstraction, manipulating his medium and taking reference from the South American and Taiwanese cultures that he identifies with to create highly personal and meditative paintings. There is also a visible influence from Matisse in the artist’s earlier works and those seen in the exhibition; the result is a combination of a large number of seemingly irrelevant symbols and overlapping variety of style, shifting between abstraction and repetition. “Out for Summer” showcases both new and earlier works from the “Mosquito” series as well as the abstraction of the everyday.

Qian explores line, form and structure, sensitive to the impact of space. Her canvases are positioned at the unlikely, but harmonious intersection of deafening structure and restrained silence, gentle movement and bold order, seeking to challenge the conforms of a traditional canvas. “Red Edge”, a rhythmically balanced composition, goes further, questioning the physical limitations of the flat plane, and seemingly reaching into the viewer’s space, to suggest a third dimension.

Qian Jiahua was born in 1987 in Shanghai, China, where she continues to live and work. The artist was the subject of a solo show at HDM Gallery in London, England, in 2018, her first in Europe. Qian has been the focus of numerous solo exhibitions in China since 2013, including The Hive Center for Contemporary Art in Beijing, China, in 2014 and a group show at the White Cube, “The World is Yours, as Well as Ours”, London, England 2016.

Guo Hongwei was born in 1982 in Chengdu, China, and lives and works in Beijing, China. Since graduating from Sichuan Fine Arts Institute, Chongqing, China, in 2004, Guo has exhibited at several international galleries and museums. Guo was recently the subject of a solo show, “Plastic Heaven”, at Chambers Fine Art, New York, NY in 2017.