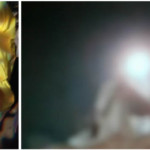 Their interest in the confluence between avant-garde and mainstream culture finds curious expression through both solo and collaborative works comprising of sculpture, sound, drawing, and moving image.

The show’s title “PooR Life” looks beyond fandom as mere imitation or deprived repetition, to explore fannish desire, consumption, and production as a mode of possession and embodied experience <*random energy spikes*> that forms new minor languages and image worlds. We R all dog people now.

Owen G Parry is an artist and researcher working across expanded performance cultures on subjects including trash, biopolitics, fandoms, fascism and Yoko Ono. He initiated the “Fan Riot” project in 2015 exploring the heightened relationship between art and fandom since the internet, which includes a Fan Club series, publications, artworks and performances. He is currently a research fellow at IASH University of Edinburgh.

Beth Emily Richards is an artist, researcher, and producer. Her work investigates contemporary mythmaking, often exploring popular culture and its associated idiosyncratic subcultures. Frequently the work seeks to complicate narratives by re-performing them in ways that use absurdism and failure to undermine dominant histories. She is a funded doctoral student in the Theatre and Performance department at the University of Plymouth.