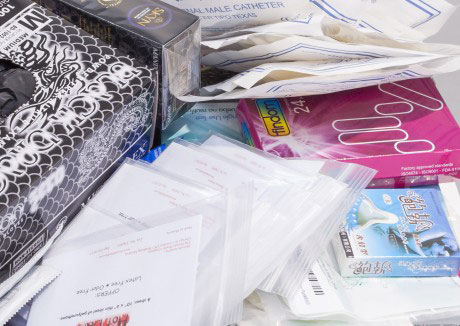 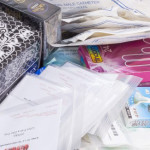 McArthur’s exhibition includes three new bodies of work and a text available at the gallery’s front desk. A series of sculptures are made from wholesale-size, high-density acoustic polyurethane foam, designed to absorb sound and impact. Positioned within the gallery, the foam composes space, offering itself and its surroundings to be sensed and felt. Equally, the foam is affected by these surroundings. It degenerates, or, put another way, undergoes its own generation, evidenced by alterations in its colour and texture over time.

A further series of works – large paper pieces arranged on sheets of stainless steel – engages the properties of superabsorbent polymer powder, a substance developed to soak up and hold large quantities of liquid. An invention of post-war materials science, superabsorbent polymer is most commonly used in disposable hygiene products such as incontinence pads, bed liners and sanitary towels. With the introduction of liquid, the powder becomes a gel; swelling to hundreds of times its original size. The polymer powder reacts to the paper pulp, complicating the papermaking process and producing an unstable material that is also reactive to the conditions within the gallery.

A third component consists of a series of stainless steel trays on low plinths, packed with small, single-use items – such as condoms, latex gloves, dental dams, external catheters and pressure-reducing heel cups – designed to absorb, contain, and distribute their contents. Through their potential uses, these items enact some of the sculptural properties of the foam and polymer paper. They underline the permeability of the exhibition itself, calling into relation seemingly bounded things: foam and concrete floor, polymer powder and atmospheric conditions, context and effect.

In addition to her use of readymade industrial objects, McArthur is interested in objects that result from – what she describes as – ‘the work necessary for life’: work that is also known as reproductive labour or living labour. Objects of this nature featured in previous sculptures and installations include, the artist’s own pyjamas, worn and altered by processes of care and sleep, as well as twenty temporary access ramps, made or purchased at McArthur’s request in order to enter and exit buildings by wheelchair.

Less interested in the body as a sovereign unit than in the fleshiness of bodies that deny such a unit, McArthur asks what materiality has to do with flesh and what flesh has to do with absorption, and absorption’s sibling, expulsion. In this exhibition, the polymeric foam and powder, and the prophylactics and medical products, show what it is to insulate, isolate and soak up, what it is to bear, to accommodate and to cushion. At the root of these new works is a particular obstinacy of material that allows for an analysis of the inseparable material relations of art to life.

Supported by the Genesis Prize, The Henry Moore Foundation, the Harpo Foundation and Brooke and Matthew Barzun.

With additional support from Barbara and Howard Morse and Chisenhale Gallery Patrons and Supporters. With thanks to ESSEX STREET, New York.