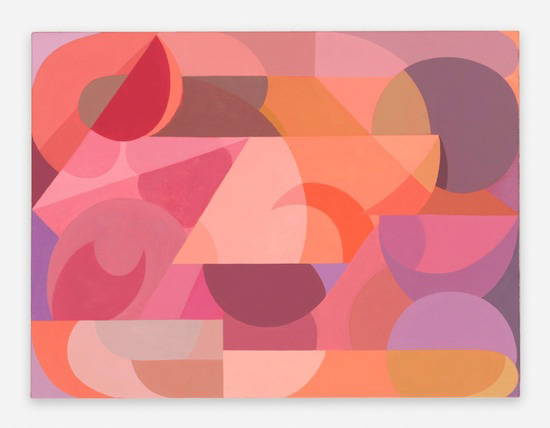 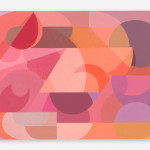 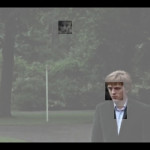 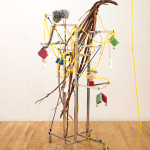 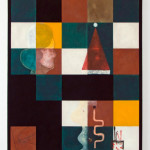 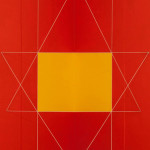 On view through 31 July, the exhibition takes its title from the name of a complex trapeze trick. A ‘passing leap’ is a manoeuvre of great precision and skill, culminating in a dynamic moment in which an aerialist’s perspective is flipped, time is suspended, and the laws of physics seem to be broken. The artists included in ‘Passing Leap’ at Hauser & Wirth are connected by a specific interest in challenging the conventional relationship between viewer and artwork. They collapse constraints of time and space in order to suggest alternative realities, environments, and realms of perception. In ‘Passing Leap’ the viewer is invited to become a participant – to help resolve open-ended narratives, distorted perspectives, spotty memories, and false histories.

Painter and sculptor Sebastian Black is best known for his ‘Puppy Paintings’, a series of paintings that render droopy dog faces with long ears in fragmented abstract shapes with monochromatic palettes. Cubist forms create a Rorschach-like illusion of a female nude or a rolling landscape. The titles of these four paintings reiterate Black’s interest in verbal play and visual unreliability: ‘Ekphrasis’, meaning ‘a description of a work of art’, and ‘galimatias’, aka ‘gobbledygook.’

John Houck‘s work re-imagines Antonioni’s classic film ‘Blowup’, in which the protagonist discovers an unexpected story hiding in the periphery of his own photographs. Houck has hacked film-editing and facial recognition software to refocus the film frame and guide the viewer’s attention toward an unnoticed narrative in an iconic film about the fallacy of visual evidence.

In ‘#Research (Chapter One)’ (2015) and ‘#Research (Chapter Three)’ (2015), Shana Lutker continues her investigation of specific fistfights that took place between key members of the Surrealist group. Through extensive research, she both collects and creates evidence for these histories, balancing upon the line between objectivity and subjectivity. Lutker’s work recalls crime scene evidence boards, and the viewer is left to identify and piece together the relevant details of a story.

Brian O’Doherty‘s installations juxtapose geometric wall paintings with rope – like a line drawing in space, the rope is placed to distort perspectives as the viewer moves. These perspectival interventions deconstruct the gallery space in which they are situated. O’Doherty’s works give form to the argument of his noted essay ‘Inside the White Cube’ (1956): the white walls of a gallery are charged with modernist design and history, and are anything but antiseptic.

Barbara Probst‘s work subverts the single frame in photography to expand the finite moment captured in an image. By using a radio-controlled shutter release, Probst is able to construct multiple vantage points on a single scene, dissecting the split second into many simultaneous narratives.

Sara VanDerBeek‘s new series of in-the-studio photographs expand upon her interests in ancient artefacts and contemporary cities to create dreamlike images of ambiguous times and places. These works layer two images within a frame to create a shallow relief that plays against the two-dimensional photograph. The stilllifes are closely cropped then cut and wrapped to create ephemeral abstractions, with the photograph acting as hybrid of image and object.

Claudia Wieser‘s sculptures, works on paper, wallpaper, and mirrored panels create a mystical environment of whimsy and play. In ‘Passing Leap’, Wieser’s installation is a meditation on geometric abstraction, art history, architecture, and film. While contemplating Wieser’s precise geometries and elemental forms, the viewer might be surprised to encounter larger philosophical and spiritual questions in her seemingly austere installation.

Haegue Yang explores the everyday object as a starting point for abstract compositions. ‘Dress Vehicle – Square Hunter’ (2011), comes from a series of sculptures made of venetian blinds. Parallel blinds manipulate the viewer’s sight by playing with light and transparency. In ‘Wild in Aspen: Celestial Martial Plan’ (2011), banal household objects seem to have an inner spiritual life. In both works, the threshold between interior and exterior is called into question.