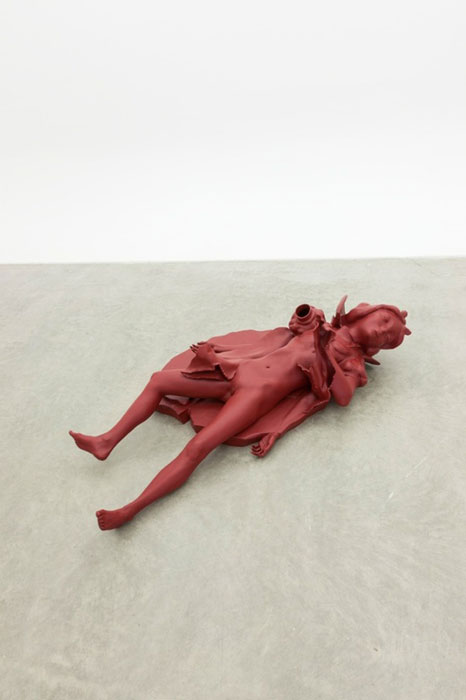 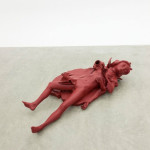 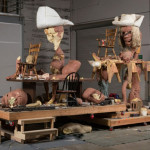 The exhibition’s main title, ‘Spin Offs’, makes reference to the entertainment industry term classifying new products evolving from a popular programme or film. Casting familiar characters in unfamiliar guises, McCarthy takes the spin off to an artistic extreme. As the artist has said, ‘It’s a way of doing things: flip it around on itself so it’s a new world’. McCarthy usurps the well-known of popular culture both in forms and titling (‘Snow White” becomes ‘White Snow [WS]’, and ‘Pirates of the Caribbean’ becomes ‘Caribbean Pirates [CP])’, to create a whole new world.

The ‘White Snow’ project began as a suite of drawings in 2009, which drew on the fairytale Snow White and explored the multilayered references within the original German folk story and its commercialised 20th century versions. The series has since evolved into a multi-platform narrative of McCarthy’s own making, incorporating sculpture, performance and the epic installation ‘WS’, presented at the Park Avenue Armory, New York in 2013.

In the latest WS sculptures, McCarthy works with computer models to create uncanny bronze permutations of the defrocked White Snow and her fragmented and debauched forest friends, Bambi and Thumper. And, for the first time, McCarthy finishes his bronzes in a visceral red patina. In ‘White Snow, The Party’ (2014), a leaping Bambi as well as a naked White Snow are repeated in dizzying array. Narrative is thus lost to multiplication and motion, a digital melding both sexual and violent. The theme recurs throughout the series seen in this exhibition. The cast forms of ‘White Snow, Thumper 1’ (2014 – 2015) – notably the joyous, well endowed, spread-eagled Thumper – find themselves swallowed within the show’s tallest sculpture, ‘White Snow, Singularity’ (2015), overtaken by even larger forms of White Snow.

Equally monumental is the carnivalesque ‘Chop Chop’ (2013) from the ‘Caribbean Pirates’ series. Two pirate hats sit atop fragmented clay figures and sail above an assemblage landscape of creative detritus including broken body casts, chairs, wooden platforms, sex toys, buckets and other objects, all punctuated with the viscous deep yellow of insulation foam. This never-before-exhibited work represents an original assemblage sculpture, which is sometimes later cast in bronze.

Inspired by the Disneyland attraction and movie ‘Pirates of the Caribbean’, the ‘Caribbean Pirates’ project began as a collaboration between Paul McCarthy and his son, Damon, in 2001 and has spawned sculptures, performance and film.

McCarthy also unveils a selection of new resin blocks from the CP series, including ‘Original Pot Head Resin Block’ (2014) and ‘Original Pig Resin Block’ (2013 – 2014). In this last sculpture, the artist takes an original sculpture of a pig lying on its side and encases it in a block of resin, creating a viscous under-water effect. A small plastic stagecoach toy can be seen atop the lying pig, linking McCarthy’s greater body of work by denoting the artist’s other ongoing series, ‘Stage Coach [SC]’.