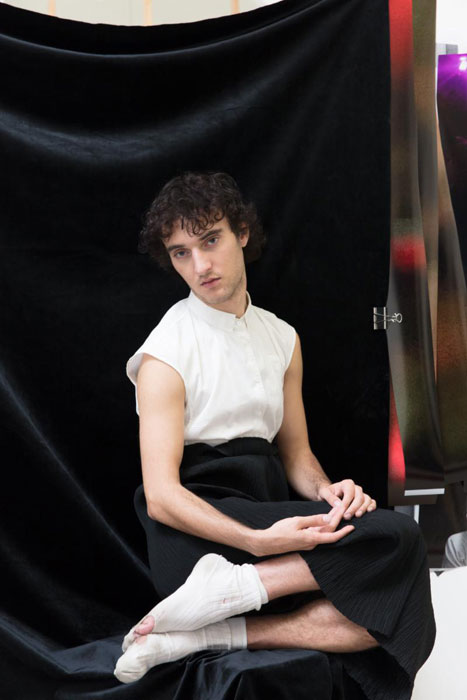 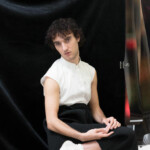 Overlapping sites of social, sexual, and creative exchange converge in Sepuya’s project, which establishes an intimate chamber within the white walls of the studio, linking the origins of photographic craft with the dimly lit spaces of queer sociality. Dark velvet drapery, a traditional backdrop of the portrait studio, establishes blackness as context for and content of the photographs. As a ground, it proposes the presence of blackness as a fundamental requisite for visibility, throwing into relief a record of touch traced in the dust and oils fogging the surface of the mirror. The vestiges of bodies imprinted on the smooth mirror plane are latent until the dark cloth foregrounds their presence. Similarly, the photographs index drives, histories, and relationships absent in the picture but present in a continuum existing outside of the images, and well beyond the studio.

Even when absent from the frame, our identification of Sepuya with the camera implicates his perspective and orchestration of the image. Though the framing and selection of the image affirms his control over the information revealed and withheld, inside the studio control is an element as malleable and substantive as the participants’ bodies. The maintenance, loss, and transfer of power shifts delicately in the reciprocal influence between photographer and subject. Manipulating the factors and circumstances of portraiture, Sepuya and his collaborators negotiate the roles of artist and subject and the dynamics of support, empowerment, control, and objectification. The artist’s counterpart in “Darkroom Mirror (_2070386)” is turned away from the camera, wrapping Sepuya in an embrace that obscures his vision as he positions the camera with tender precision; the image itself is a visual artifact of an encounter oriented entirely through touch. The central aperture of the lens, its gaze deflected back upon itself by the mirror, is the interface through which artist, subject, and viewer come into contact.

The camera and mirror operate as complementary instruments of compression and latency, establishing a relational loop between the subject as image and the image as subject. Fragments of prints reflected in the mirror or overlaid upon it assert the raw materiality of bodies, photographs, and the studio mise-en-scène, reconfiguring and abstracting the physical elements of Sepuya’s practice. We glimpse other figures and other spaces that entangle the manifold states and tenses of the studio portrait, and integrate the premises and contingencies of the multiply-produced photograph. The usage of the mirror as an instrument for collating various views and tenses recalls their application in early nude portraiture as a device for recording the figure in the round, mediating between the two dimensional photograph and a comprehensive portrayal of the figure and space. Referencing this history, Sepuya exploits the mirror’s capacity for deception and disclosure, the artifice of the set-up revealing itself through its own workings. The mirrors in his studio borrow as much from Velázquez as from photography. They reflect a performance of documentation and disorient our conceptions of subject, time and narrative, and the role of the viewer.

In “Orifice (0X5A6982),” Sepuya holds up a sheet of dark brown velvet between the camera and mirror. Acting as both figure and ground, the fabric reifies the haptic space of the mirrored darkroom. Cut into the cloth is an aperture or glory hole, the edge of which obstructs the lower corner of the lens. The unfolding conditions of the photo collapse upon the blink of the shutter, compressing the tenses of studio time. In Sepuya’s hands the formal and erotic circuit that exists between artist, subject and final image suggests that the fundamental operations of photography are commensurate with the construction of our sexual selves.

Sepuya was included in the “Trigger” exhibition at the New Museum, as well as in the “New Photography” show at the Museum of Modern Art. His photographs are in the collections of MoMA, LACMA, the Carnegie, the Whitney Museum of American Art, the MCA/Chicago, the Guggenheim and numerous others. A solo show will open in May at CAM/St. Louis and he will be included in forthcoming group exhibitions at the Getty and at the Guggenheim. This is Sepuya’s first solo exhibition with Team Gallery in New York, having exhibited previously at our Venice Beach project space in the Fall of 2017.