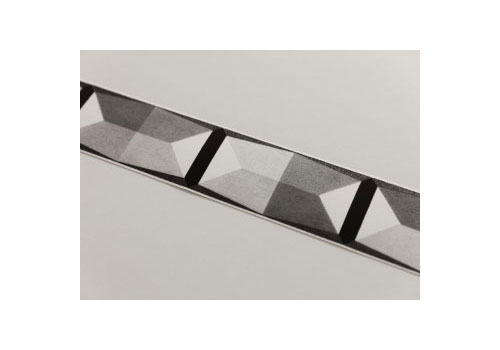 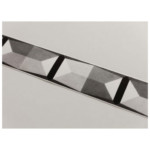 With a palette of mostly black, grey and white, Schulte transforms the gallery into a space of somber contemplation. A site-specific wall drawing encompasses parts of two walls, its white center appearing as both a solid and void.

Two elongated rectangular aluminum forms, edged in black, lie on the floor, one the average height of an American male and the other of an American female. A drawing, 90 inches high and less than three inches wide, leans against the wall. Other drawings, mostly square in format and installed throughout the gallery, feature a variety of geometric shapes, striated lines and X forms.

Black is the color of power, fear, the unknown and death; and white the color of goodness, purity and perfection. Similarly, for Schulte, the X serves as both a symbol of negation and affirmation: a crossing out and a simple mark that says “I am here.” The language of abstraction creates a realm in which opposites can co-exist.

This is Pete Schulte’s (b. 1970) second exhibition with the gallery. He received his BFA and MFA from the University Iowa in 1997 and 2008, respectively. He has had solo exhibitions at Whitespace Gallery, Atlanta; The Visual Arts Gallery at the University of Alabama, Birmingham: Beta Pictoris Gallery, Birmingham and Luise Ross Gallery, New York (reviewed in Art in America). He has been an artist-in-residence at Yaddo, Hambidge, The Atlantic Center for the Arts, Bemis Center for Contemporary Art and Threewalls. Schulte lives and works in Birmingham, Alabama with artist Amy Pleasant, with whom he co-directs The Fuel & Lumber Company, a curatorial initiative facilitating exhibitions and related events in the Southeast and beyond.