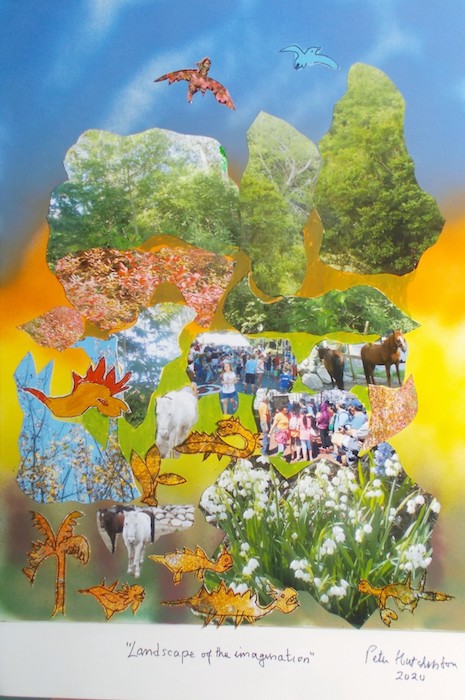 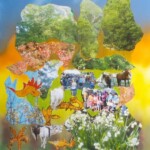 Peter Hutchinson: Landscape of the Imagination, 2020, photo collage with text on paper board, 30 x 20 in

Freight + Volume is thrilled to present “Other Worldly”, our most recent solo exhibition with long-standing Peter Hutchinson.

Peter Hutchinson’s ventures in “sci-fi” are actually continuations of our world. They’re also continuations of his ongoing fascination with nature in all its forms. When the artist was asked exactly what he meant by “nature,” he seemed a little put off by the question. “Trees and such” was his response – a beautifully right answer which makes all the more sense when you think about Hutchinson’s craftsmanship and its relation to recurring themes cutting across the body of his work.

Nature isn’t an abstraction, an élan vital, or, as Dylan Thomas wrote, a “force that through the green fuse drives the flower.” Nature is a place; that air of uniqueness specific to a particular site. While preserves that cultivate the growth of wilderness are man-made and separated from both urban and suburban geographies, what’s “natural,” properly understood, is more than merely wilderness. In its authentic sense, nature is indigeneity, the fitness of life for its environment. This environment can be social, scholastic, landlocked, forested, dry, or coastal. What’s essential is that the unique features of this place are reflected in the beings which exist precisely there. In the final analysis, human life is indigenous to the earth, which constitutes the final frontier Hutchinson traverses in his current exhibition.

Hutchinson’s earth is like an ever expanding sound stage, a setting for both real and imagined voyages. The fact that his take on indigeneity incorporates otherworldly constructions as much as snapshots of our world, only makes his work all the more anthropologically astute. His “Tube Sculptures”, for example, are not less tellurian for alluding to modes of intelligence which exist apart from human life. A caption under one such work reads: “After decades of making these sculptures / They finally see the light of day!” This almost puts them on the level of spaceships: perspectival machines through which we can glimpse the workings of another planet. The fact that these sculptures are made of quotidian elements only enhances their air of mystery. Are these alien landscapes caught inside glass spheres? Is the matter roiling about inside them extraterrestrial? The diminutive scale of Hutchinson’s tube sculptures equally raises questions about the proper way to record and archive indigenious existence. On the one hand, you don’t want to alter the integrity of the lifeforms you’re describing; nor destroying nor augmenting them. On the other, you’re not just describing them either. You need to recreate them in some way, eschewing all reductiveness and exaggeration.

Hutchinson’s use of collage suggests an interrelationship between the imaginary and the real, the territory and the map. Just as his tube sculptures evoke secret fluorescences hidden in the mantle of the earth, his more pictorial works like “Vacation” (2021) suggest that there are easy-to-overlook synchronicities between desire and perception. The way “Vacation” quite literally spells itself out, in underlined letters at the top of the work, implies that more is happening than a simple leisurely trip. To my mind, the real crux of the work lies in the way Hutchinson uses layering. There’s at least four different kinds of imagistic tools, or layers, used here – each being a different form of mark- or picture-making. Each has its own temporality, its own point of origin; but they all come into confluence around how they collectively recreate an experience of being in Provincetown.

The multi-tiered buildings in “Vacation”, which seem almost childlike in their exposition, reflect the summery joy of the people collaged into the work. At the bottom of this parade of activity, there’s a caption that reads, “Vacation time in Provincetown.” What’s interesting about this caption is the way it ties together diffuse pictorial elements. As a classificatory gesture, this caption serves to highlight the business and excitement pervading the whole work: a flaunting of its constructed essence which, ultimately, constitutes “Vacation”‘s aesthetic allure.

Hutchinson is at his most fanciful when he’s at his most literal – as the work “Landscape of the Imagination” (2020) illustrates clearly. In this piece, a skyey, multihued backdrop sets the stage for photos which have an almost documentary appeal to them. The saurian dragons and serpents drawn into the work are also less fanciful than descriptive, referencing the prehistory of mankind. Sharing a common visual surface with these hand-drawn elements are photographs of trees, horses, streets crowded with people, and white-tipped flowers. The merging of these different species and experiences, subtended by different media, showcases the common ancestry humans, animals, plant life, and dinosaurs all share. There’s a continual reference to the present moment in “Landscape of the Imagination”, to a unique “now” which constitutes the indigeneity of Hutchinson’s imagined landscape. Like much of his recent body of work, “Landscape of the Imagination” consolidates itself into a vignette, suggesting an imbricated divide between the scattershot way things appear to us, and the common origin experience has on the earth.

Born in England, Peter Hutchinson has lived in the United States for over half a century and has practiced art for nearly as long. Beginning as a geometric painter, his close contact with minimal artists in New York such as Sol LeWitt and Tadaaki Kuwayama exposed him to conceptualist thinking at its inception. But, Hutchinson turned away from minimalism and conceptualism’s rhetorical bent, preferring to follow a more overtly poetic and nature-oriented path. In this way, he remained true to his British roots, mirroring and even anticipating the landscape orientation, and physical commitment, of artists like Richard Long and Hamish Fulton, and evincing the heritage of the great poets and painters of the 18th and 19th century, including Constable, Wordsworth, and Blake.

A full color limited edition artist book will be avalible for sale online and at the gallery during the course of the exhibition.

Please note that proof of vaccination will be required to enter the gallery, in accordance with Vaccine Key to NYC.