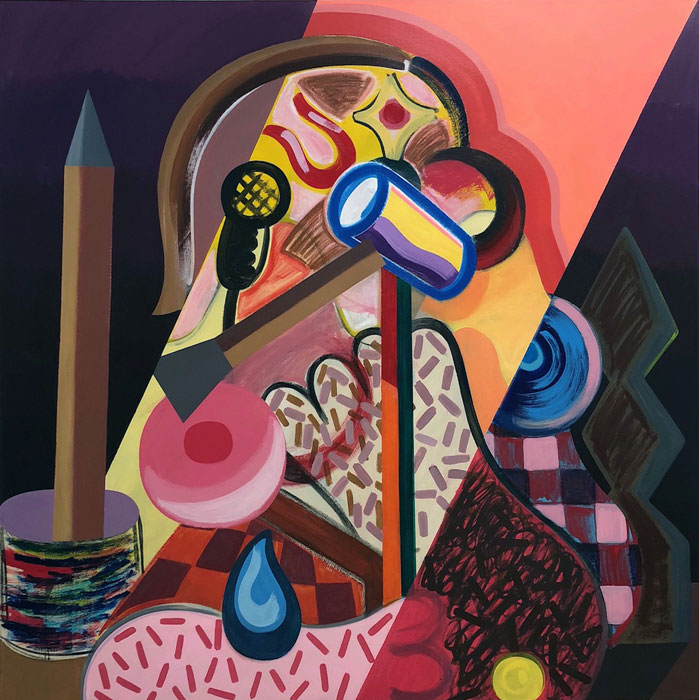 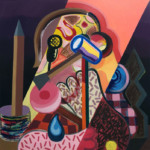 Freight + Volume is pleased to announce “Comedy Cellar”, an exhibition of paintings and drawings by Peter Schenck. In his second showing at the gallery, following his 2016 exhibition at the Arts+Leisure project space, “Clear and Present Danger”, Schenck continues to explore themes of artistic isolation, anxiety, and the oscillating tumult of everyday failure and triumph, presented in a fabric of dynamic, expressionist forms and colors. A current of sardonic “gallows humor” runs through the works on display, and the junctions of visual symbols and narrative figures are treacherous and fraught with disaster. Expanding upon his earlier narrative modes, Schenck focuses on developing this new series of “characters”, charting their inner and outer forms and complexities. At times sheathing them in shadow and at others bathing them in light, the artist highlights the perplexing nature of the characters and their relation to their settings, perhaps alluding to the treacherous nature of pictorial meaning and the enigma of existence itself.

“Comedy Cellar” takes its name from the eponymous Manhattan comedy club, and much of the work references Schenck’s own time as a stand-up comic in Philadelphia, an experience that continues to inform the content and compositional structure of his paintings. He frequently deploys a stage-like setting or shallow depth of field, a nod to the close proximity of a viewer’s distance to the comedian / performer on stage. In “Down in the Cellar”, a female figure draped in a red Roman toga takes on the mantle of both performer and studio painter, holding court and seemingly drawing (and puncturing) the cartoon head of monstrous male portrait. Brushes, a palette table, a skull and other studio elements surround the central figure; the uneasy juxtaposition of these elements suggests that the subject relishes both the creative and destructive acts of her vocation.

While the thread of humor runs throughout all of Schenck’s work, the use of the word “cellar” implies that something is hidden or in the shadows below the observed surface. In our mind’s eye, light is a tool of both remembering and forgetting, allowing us to cherry-pick certain memories while subduing others. His use of light is also a nod to Philip Guston, with the artist observing that “while Guston did not treat his subjects with a light and shadow effect like I’m doing now, he often had light bulbs and light chords in his paintings to add drama and realism to his interiors”. The character of light in Schenck’s work varies from a concentrated, spotlight-like effect to a flattened abstract invention meant to simply carve up a figure or forms with a set of dividing lines, and in certain paintings, figures slip in and out of view while taking a central position. In “Summer Mistakes” (2017-18) an explosion of imagery depicts a figure being carved in half by a slicing, deliberate charcoal-drawn line, while a female figure enters from the right. The central, cannibalized figure maintains his position while outside forces swirl around, a barrage of objects descending with a perturbing mix of light-hearted buoyancy and aggression.

A group of larger (measuring 8.5 x 5 feet vertically) works characterized by large surfaces chopped up into a recognizable grid pattern distill Schenck’s recent exploration of light and shadow. While these figures and objects reveal themselves within the confines of the grid, they simultaneously break out of it often in order to form their own connections. Demonstrating Schenck’s continual formal experimentation, they further engage with Comedy Cellar’s context of connections, misfires, failure and triumph.

He has been an artist in residence at The Vermont Studio Center (Johnson, VT) and the DNA Residency (Provincetown, MA). Schenck has been featured in publications such as The New York Times, Timeout New York, Two Coats of Paint, #FFFFFF Walls, Painting is Dead Blog, and Elephant Magazine.