Philip Hanson – It is too difficult a Grace 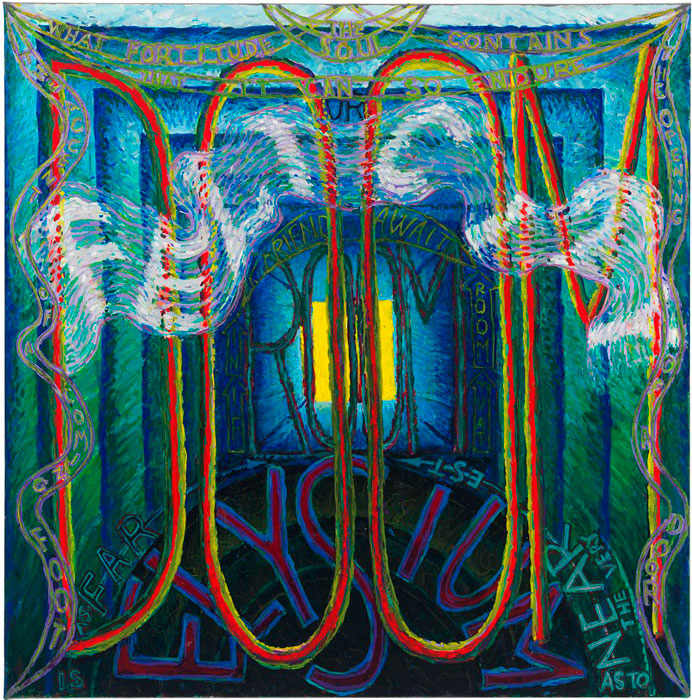 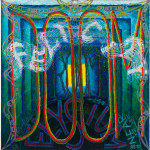 James Cohan is pleased to present the exhibition “It is too difficult a Grace”, the gallery’s first solo exhibition of paintings by Philip Hanson.

“It is too difficult a Grace” presents a selection of new and recent paintings that exemplify Hanson’s intersection of text and image, and his complex layering of dense, richly colored patterns with excerpts from Romantic era poets. Originally associated with the Chicago Imagists, Hanson’s approach to painting possesses the Imagists’ desire to capture the visceral and emotional aspects of what it means to be human, yet through the earnestness and sincerity that lives within the words of Emily Dickinson, William Blake, and William Shakespeare.

Words in Hanson’s paintings glint across unfurling banners and pass through layers of interlocking spaces characterized by dramatic shifts from light to dark. Often reworking lines from the same poems across multiple compositions, each time the words are manifested in new ways, sometimes echoing previous versions. Several recent works call upon the phrase “what fortitude the soul contains” from Dickinson, demonstrating that way repeatedly concentrating on the same phrase affords Hanson the opportunity to contemplate the underlying meaning, each time the structure and the flow of the letters is transformed. Utilizing a bold palette of color and the structure of the letters themselves, Hanson reinvents the language through its shape and therefore impacts its meaning as well. Hanson’s adoption of this close, line by line analysis of a poem was greatly influenced by his relationship with the New Criticism movement that proliferated mid-century literary criticism while he was studying poetry at the University of Chicago. His practice of diagrammatically breaking down and redeploying a poem across a network of illuminated supports add to, rather than appropriate from, the poetry that inspires them.

Hanson’s work is fueled by what curator Michael Rooks refers to as the “New Sincerity ethos… a paradigm in which the pursuit of grand universal truths, like the virtues of love, are conditioned by an innate skepticism. An ethos that searches for a truth that it never expects to find.” The excerpts from poems such as Blake’s “The Sick Rose” and Dickinson’s “I am nobody! Who are you?” possess this sincerity and fortitude of these universal truths that have resonated over generations, and which Hanson is able to externalize so aptly in his paintings.

Hanson has actively exhibited his work both nationally and internationally since the late 1960s. His work has been featured in numerous group exhibitions, including the 2014 Whitney Biennial, curated by Michelle Grabner; “Chicago Imagists”, Karma International, Zurich, (2013); and “Art in Chicago, 1945-1995”, Museum of Contemporary Art, Chicago (1996). Prior to this, Hanson showed with the Chicago Imagists in exhibitions such as the seminal “False Image” at the Hyde Park Art Center (1968), as well as the Museum of Contemporary Art, Chicago (1969 and 1972); the Institute of Contemporary Art, Philadelphia (1969); and the Sao Paulo Biennale (1973). His work is in the permanent collections of the Museum of Contemporary Art, Chicago, the Art Institute of Chicago, the National Museum of American Art, Washington, DC, and the Museum des 20 Jahrhunderts, Vienna. Hanson (b. 1943) received his BA from the University of Chicago and an MFA from The School of the Art Institute of Chicago. He currently lives and works in Chicago, Illinois.