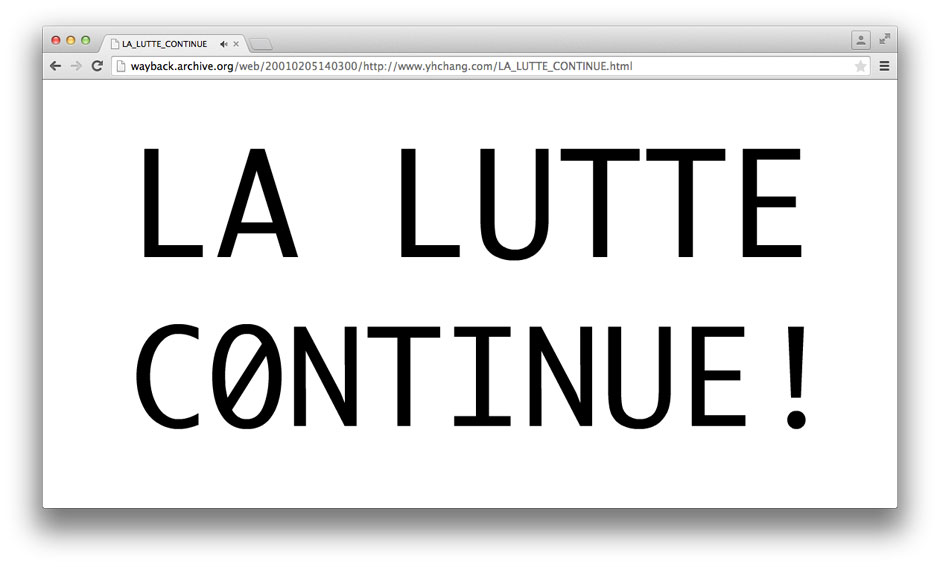 “POEMS 1990-2001” is an exhibition featuring digital poetry produced or digitally reconfigured between the years 1990 and 2001. Framing these years as a moment of expansion of the means of publishing and producing poetry – marked by but not limited to technological developments such as hypertext, Flash and VRML (Virtual Reality Modelling Language) – it groups work that questions the dominant ground of the modern poem: the page. Whilst many avant garde poets produced experimental work that moved beyond the confines of the white square of the page throughout the last century, such as, for example, performance poets like Hannah Weiner, who was recently subject of a retrospective survey at Kunsthalle Zurich, as well as poets working with technology to create initiatives like John Giorno’s “Dial-A-Poem “service, with increasingly wide adoption of the digital as a medium such experiments have quickly and widely proliferated.

In her 1998 book “Poetry on & Off the Page”, critic Marjorie Perloff claims that the page, following the deconstruction of the line in movements like concrete poetry and language poetry, is the primary unit of the poem. Yet what happens when the poem isn’t intended to be printed on a page at all? Works like Eduardo Kac’s “Accident” (1994), a Shockwave Flash file incorporating movement and sound, or Hazel Smith’s “Intermingling” (1998), a mixed-media hypertext, both included in this exhibition, stretch traditional conceptions of where the poem, or indeed the poetic effect of a poem, is located – not on the page per se, but produced within the interaction of multiple media. These poems are not discrete objects, but span media and expand the sense of the poem as something that crosses different senses, locations and temporalities; an object of transferral and not a static or singular entity.

In this way, these are works that intuit a contemporary trend that sees media becoming increasingly immersive and dispersed, as we (as users and programmers alike) migrate away from an understanding of computers as singular objects that offer portals into the digital realm, but instead as increasingly multiple and “ubiquitous” devices that we carry in our pockets and embed within the domestic and governmental tools that we use to structure our lives. Further, they offer a mode of playful and often highly personal critique of the ways that language intersects the body and these technologies to structure us as subjects, and the relationships we construct as subjects.

In addition to the, now historical, poetries on display, posters have been commissioned from four contemporary artists. Advertising, recursively, the poems they share a room with, these embody a similar dynamism in deconstructing (and reconstructing) the static ground of the poster, and speak outwardly to the sensationalist, often appropriative and energetically circulating media sphere that governs our current digital condition. They emphasise language to be always a specifically materialised and embodied aesthetic realm.