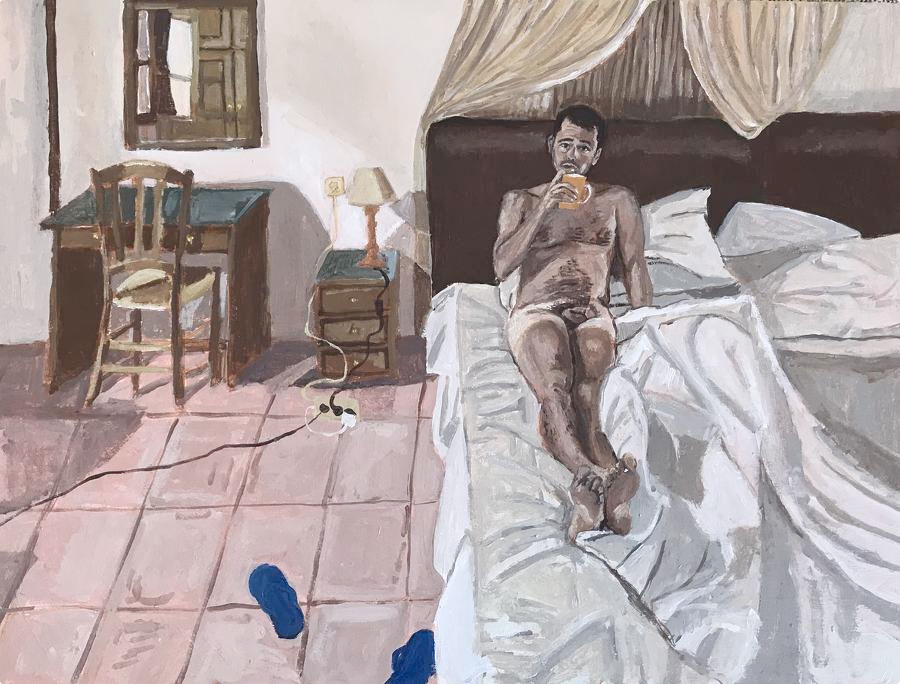 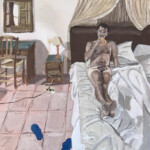 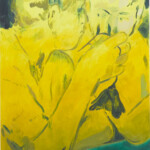 Polina Barskaya‘s paintings have a diaristic quality to them. Working from photographs, but allowing for artistic liberties, Barskaya depicts either herself or her husband within a domestic space. The informal scenes take place in the artist’s home in Brighton Beach, Brooklyn or in various accommodations visited during her frequent travels. Mired in quotidian details – making coffee, putting on a pair of stockings, drinking tea – each psychological drama is charged with longing, sexuality and self-reflection. There are echoes of Pierre Bonnard (1867-1947) and Giorgio Morandi (1890-1964). In “Tsagarada” (2018), a nude man is depicted lounging in bed in an impersonal room with an empty desk and nightstand. Perhaps he is just waking up or returning from a swim on a summer day. A conspicuous pair of bright blue shoes stand out against a pale pink floor acting like another cast of characters within this setting. Barskaya’s paintings remind us of the power of vulnerability and the strangeness of place.

Anthony Cudahy also explores private spaces and the unspoken drama surrounding intimacy, but his subjects are culled from assorted places such as the internet, research projects, and most recently, the archives at the Gay and Lesbian Center in New York. Cudahy develops a sentimental attachment to the images he collects. His paintings are nuanced and reveal the complexities of life. In “Gift” (2019), two men, inspired by a found photograph from the 1970’s, are depicted in a moment of private conversation. A flower, possibly a romantic gesture, is held upside down and flaccid with its’ stem emulating a hook or a sharp point. An object on the table, seemingly part of a scythe, is in partial view. This unease, however, is mitigated by the tenderness of their exchange and the illuminating warm colors. Cudahy’s paintings attempt to unravel the past and the present all in one.

Anthony Cudahy (b. 1989, Fort Myers, Florida) received a BFA from Pratt Institute, Brooklyn, NY and is currently a MFA candidate at Hunter College, NY (anticipated 2020). His work has recently been exhibited at 1969 Gallery, NY; 68 Projects, Berlin, Germany (with Kyle Coniglio & Doron Langberg); The Java Project, Brooklyn, NY; Mulherin, Toronto, ON and Alfred University, NY, among others. Cudahy lives and works in Brooklyn, NY. He is represented by 1969 Gallery, NY.