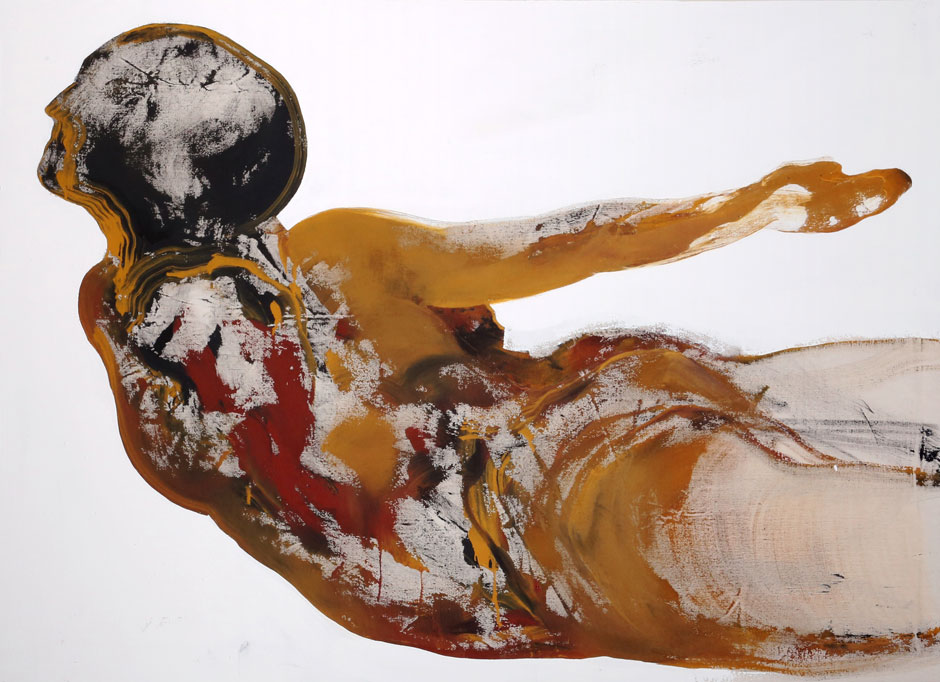 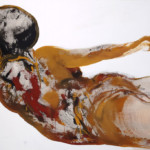 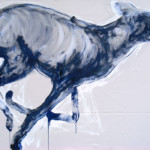 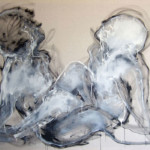 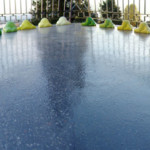 David Segeta is a unique combination of vagabond, cosmopolite/Weltbürger, and intensely dedicated and diligent artist. He incessantly travels with his brother from their base in the Czech Republic through Europe, the Middle East and farther. He has done this for years, with or without money, always finding a way no matter what, even as he also simultaneously produces accomplished paintings and drawings. I was immediately charmed by his works upon first seeing them in the backroom of Jedlitschka Gallery in Zurich. That is perhaps surprising to those who know that I generally have little interest in figurative Neo-Expressionism, and that is the rubric under which Segeta’s works are often classified. His paintings are, however, individual and reach beyond this category. Perhaps this is due to Segeta’s unusual combination of openness to the world and autodidacticism.

The artist did indeed have rigorous training in an art, that of fine-art jewelry, but he abandoned that without delay upon graduation, devoting himself to learning painting on his own, developing his approach through considerable exertion. He painted and drew night and day. His models came from life: the animals around him on a farm, the people in the city, his brother and cohorts playing basketball, his girlfriends and friends. Significantly, these were mostly beings caught in action and therefore not in the studied repose of academic figure-painting. Besides growing up in the Czech Velvet Revolution, one harrowing life-experience shaped Segeta massively. After working for many months on a farm in Israel, he and a friend were making their way back to the Czech Republic through a Romania still under the influence of earlier corruption, which they themselves term ‘The Wild East’. There, the corrupt police jailed him for ostensibly 10 years on trumped-up charges. It was in truth a method of extorting from the travelers their hard-earned cash. After giving the cash up, he was “only” forced into confinement for one year. That is a genuine societally-caused existential crisis! At that point Segeta decided it was all or nothing. He would be a full-spirited, wholehearted artist or nothing at all. And so he is.

Segeta paints vigorous, freely-brushed images of animals, people and people in relationships, in acrylic on canvas. Putting on my art historian’s hat, I can see comradeship in Segeta’s art with Michiko Itatani’s mixture of Baroque inspiration and abstraction, Lex Braes’s representational paintings of his daughter and David Park’s figurative works. There is a furiousness to the brushstrokes, yet an overall buoyancy to the work. Fluid, Pollockesque linear elements contrast with broad swaths of paint and thick incidents which are contemporary offspring of Prague Baroque painter Jan Petr Brandl. The images themselves show people and animals in contorted poses, which Segeta obviously caught on-the-run, reminding me of the beauty of Rembrandt’s ink drawings of people on the street.

Bright blues, reds and complementary black passages are often surrounded and permeated by white, as the artist allows the field-like underpainting to show through. There is a lightness to his work, a personal divergence from what one expects of expressionist painting. Thus, the ‘weightlessness’ of the title: a simultaneous weightiness of potential import and a lightness of handling. This can be imaginably related to the central metaphor of his illustrious compatriot Milan Kundera’s novel “The Unbearable Lightness of Being”.

The weighty weightlessness of David Segeta’s painting is located in their vigor. The energy of life intensely lived appears in the human and animal representations, the haptic paint-handling, the poses of the figures, the compositions and the light-imbued atmosphere.