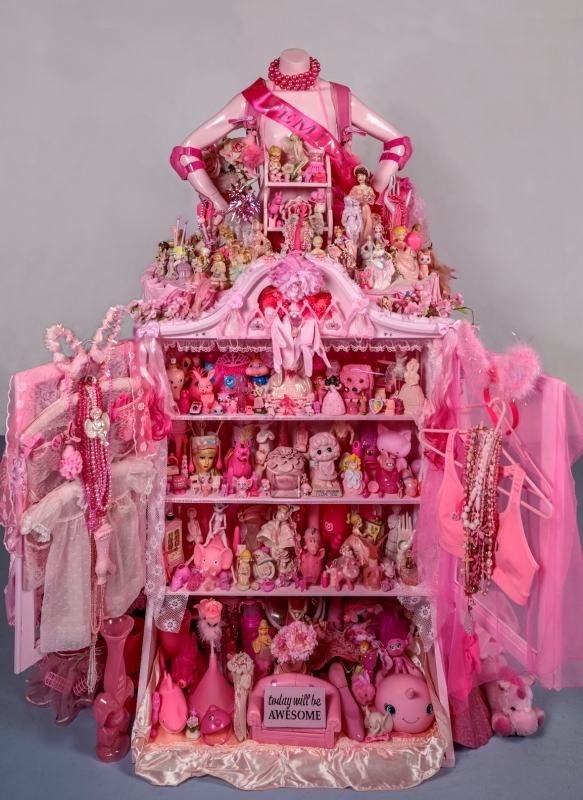 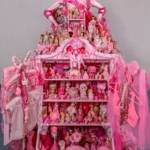 P·P·O·W is pleased to present “Bound Angel”, a solo exhibition of new works by Portia Munson. For over three decades, Munson has created maximal installations, sculptures, paintings, and digital prints using a vast accumulation of ready-made consumer products to decipher the latent cultural codes embedded in mass-produced items. Combing through second-hand stores, yard sales, and flea markets, Munson collects hundreds of objects, each one a surrogate for the thousands just like it around the world. Furthering this decades-long investigation, “Bound Angel” examines the impact of mass production on the formation of identity and the resulting connection between the ongoing struggle for gender equality and the mounting ecological crisis.

Building upon her pivotal “Pink Project Table”, originally exhibited in Marcia Tucker’s historic “Bad Girls” exhibition at the New Museum in 1994, the exhibition’s largest sculpture and namesake, “Bound Angel”, features discarded objects in the shape of female angels, including figurines of small girls, the Virgin Mary, classical and pornographic nudes, snow globes, candle holders, nightlights, lamps, soap dispensers, and more. Organized on an immense oval dining table covered in a tablecloth composed of used wedding dresses, the entire sculpture forms the shape of a bound and faceless bride. Beginning with the cords of the lamps, Munson began binding many of the objects, blinding, stifling, and entangling them to reveal the violence and terror lurking under the surface. Munson’s new series of “Serving Trays”, ceramic and glass figurines tied up with string and amassed on elegant, anachronistic silver platters, will flank this monumental installation. Together, both “Bound Angel” and the “Serving Tray” series act as sacrificial martyrs, inviting the contemplation of what we are being fed as a culture and who ultimately pays for it.

Along with “Bound Angel”, Munson includes another large-scale sculpture in the shape of a female form. In “Today Will Be Awesome”, 2022, Munson includes the top half of a headless pink mannequin, arms folded to the hip in a power stance and wearing pink elbow pads, back-pack, a large ribbon with the words FEMINIST printed on it, and a pink plastic pearl necklace. Thousands of amassed pink objects produced to appeal to women and girls including figurines, dolls, beauty products, fake hair, fake flowers, dresses, bras, tiaras, evening gloves, jewelry, awards, and more form the figure’s large hoop skirt, opened at the front to reveal everything she has to offer. At her base is a sign, made for a woman’s desk, stating “Today Will be Awesome.” In front of the sign lies a curled-up figurine on its side, her hands pressing against her pelvis in the fetal position. While the individual objects in “Today Will Be Awesome”, 2022, were manufactured to sell confidence, positivity, and success to young women, Munson’s accumulation of them exposes their suffocation, violence, and victimization.

In addition to the new sculptures, “Bound Angel” will also feature painted and drawn still life meditations on individual objects found within Munson’s installations. In 50 drawings from her “Functional Women” series, Munson focuses on objects which exaggerate the female form such as spread legs nutcracker, ash tray, bare breasted mug, female torso perfume bottle, naked bottle opener, and lewd salt and pepper shakers. Munson’s paintings and drawings underscore her genuine fascination and care for the objects she collects, and her desire to discover and record their messages. Taken together, the works which make up “Bound Angel”, act as a living archive documenting the ways women’s lives and bodies are controlled and manipulated. “Bound Angel” reviles the insatiable, consumerist, sexist, and repressive value systems which degrade society and destroy the environment. By bringing these objects together, Munson harnesses their collective power, transforming their original function to pacify, sexualize, and infantilize women into one of retaliation, confrontation, and strength.

Portia Munson (b.1961) lives and works in Catskill, NY. She holds a BFA from Cooper Union, an MFA from Rutgers University, and studied at the Skowhegan School and Painting and Sculpture.