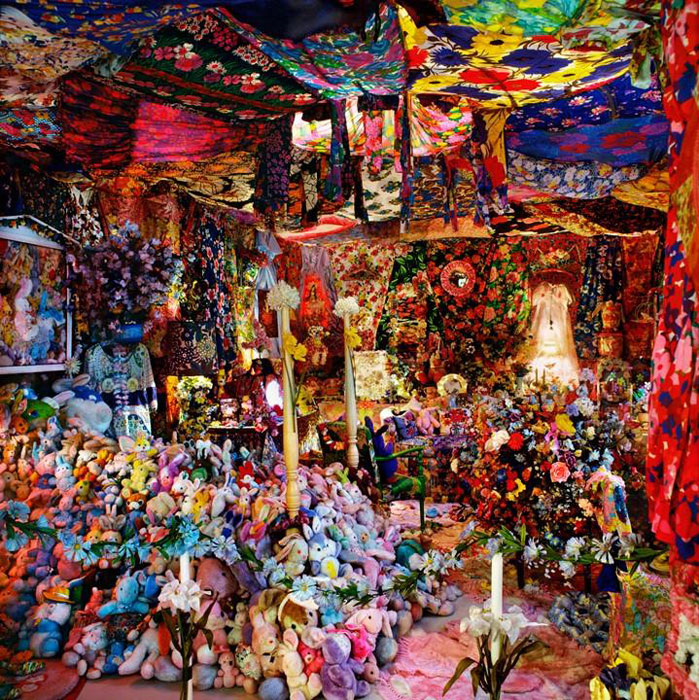 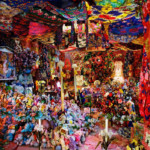 P•P•O•W is pleased to present “The Garden”, a solo exhibition by Portia Munson. Working in a variety of media, including sculpture, painting, photography, and installation, Munson creates works that evaluate contemporary society, our environment, and the objects we choose to surround ourselves with, viewed through the lens of feminism. The exhibition brings together work created from the 1990s through today, shedding light on the way Munson observes and organizes her everyday world. The works are a commentary on the fleeting nature of time, the fragility of life, the representation of women, and our cultural obsession with disposable objects.

Among the work on view in the front gallery will be “Functional Women”, a sculpture incorporating found, utilitarian objects that depict women or parts of women, and which are here assembled together to form the shape of a woman. At once macabre and humorous, “Functional Women” not only reflects Munson’s ongoing interest in ways femininity is portrayed, but also her fascination with the readymade.

Also on view in the front gallery will be “Her Coffin”, a large glass box filled with thousands of discarded pink plastic products including ribbon refrigerator magnets, breast cancer awareness wristbands, combs, and high heel doll shoes. Munson has long been interested in the color pink – the way it is used to signify and commodify the female sphere and the way the color has been adopted and appropriated over time. “Her Coffin” also acts as a time capsule, depicting what Munson describes as “this carcinogenic plastic moment in time.” These works speak to the gluttony of modern culture and the way in which we systematically destroy our natural world in service of convenience.

The centerpiece of the exhibition will be “The Garden” (1996), a lush, densely packed installation in the form of a feminine bedroom that appears to have been overtaken by an exuberant and uncontrolled garden-related objects and imagery. A quilt of flowered dresses covers the ceiling and walls, creating a canopy for the garden emerging beneath. A floral love seat sits among clusters of consumer products that seem to have grown over every surface. “The Garden” at once bursts with life and beauty, suggestive of fertility, sexuality, and rebirth, and at the same time is suffocating, dark and funereal, as it contrasts the vibrancy of life with the artificial nature of the materials. Munson is interested in the way the manmade invades nature. The tension between these two existences unfolds in her work, and she invites viewers to look more closely, embrace this tension, and to meditate in the space between the beautiful and the repulsive.

Furthering her exploration of the natural versus the artificial will be “Dollhouse Reliquary”, in the center gallery, a dollhouse stuffed with found animal bones. Accompanying “Dollhouse Reliquary” will be a series of photographic prints of found dead birds surrounded by vibrant flowers. The works feature scans of the birds on the day they died, surrounded by flowers that were blooming at the same time. The works are meant to honor and memorialize the birds, while at the same time drawing connections between our adoration of nature and destruction of the world around us.

In conversation with the sculptures and installation works will be a series of paintings (1990 – 2016), of various found objects. By decontextualizing these quotidian objects from their traditional function, Munson creates a new way of looking at them, infusing them with an air of mystery and unfamiliarity.

Portia Munson was born in Beverley, MA in 1961 and lives and works in Catskill, New York. She holds a BFA from Cooper Union and a MFA from Rutgers University, and has studied at the Skowhegan School of Painting and Sculpture. Her work was recently exhibited to overwhelming enthusiasm at P.P.O.W’s booth at Frieze London. Her work has been exhibited at The New Museum, New York, NY; Kunsthallen Brandts Klaedefabrik, Odense, Denmark; Portsmouth Museum of Fine Art, Portsmouth, NH; MASS MoCA, North Adams, MA; Wave Hill, Bronx, NY; The Pennsylvania Academy of Fine Arts, Philadelphia, PA, and The Museum of Contemporary Art in Helsinki, Finland, among others.