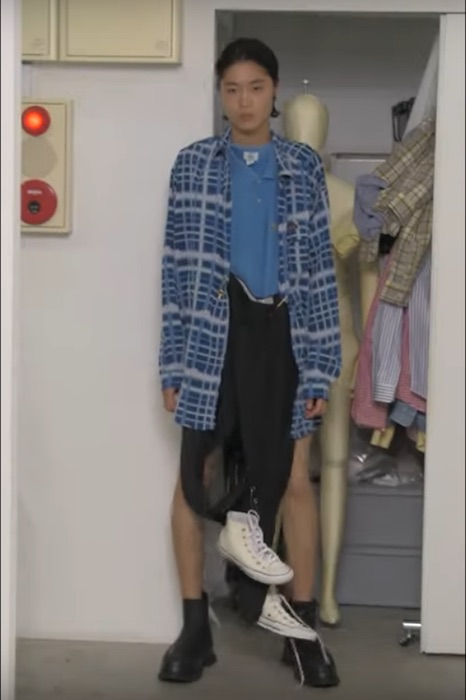 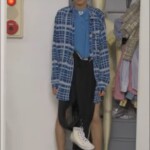 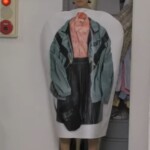 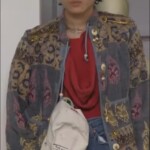 This work takes articles of clothing, which have traveled far from their origins to arrive in Japan, as immigrants. The exhibited items are produced by safety pinning pieces of used clothing produced in various nations and imported to Japan. The tarpaulin clothes covers are printed with photographs shot of clothes laid flat in okiga format. Okiga is a way of photographing clothing unworn and laid on a flat surface. Okiga has long been used in Japanese fashion magazines and its history harkens to 1868. Western clothing was first imported from Europe primarily on the Meiji Emperor’s instructions for Japanese citizens to Westernize their dress. Later, in 1945, GHQ Occupation brought American quotidian culture into Japan, and Western clothing was adopted generally.

While assembling a traditional Japanese outfit only requires the selections of one main item of clothing and accessories, Western clothing requires multiple items to be chosen. The okiga style of shooting clothing items was developed specifically for suggesting Western clothing ensembles in fashion magazines. The safety pins used to suture the pieces of used clothing references the wearing of safety pins by those in Europe and the US to protest hate crimes perpetrated against immigrants and minorities after the US presidential election of Donald Trump and the decision for the UK to leave the EU.

The work thus overlays the temporal context of various historical periods and cultural elements assembling and mixing to produce new identities, and the postwar history of Japanese fashion, which has produced its own legacy by importing foreign cultural elements.

PUGMENT A fashion label founded by Karin Imafuku and Masahiro Otani (both b.1990) in Tokyo in 2014. Through observation of the transformation process in value and meaning of clothing in human activity, we incorporate this spirit into the production process of their clothes. Focusing on the relationship between human and images concerning fashion, we create and exhibit clothing in order to find different viewpoints on existing values, environments, and information. Recently, we presented in “Photography and Fashion Since the 1990s” at Tokyo Photographic Art Museum, Tokyo, 2020. “MOT Annual 2019 Echo after Echo: Summoned Voices, New Shadows” at Museum of Contemporary Art Tokyo, Tokyo, 2019. “1XXX‒2018‒2XXX” at KAYOKOYUKI, Utrecht and nid a deux, Tokyo, 2018. PUGMENT collaborated with photographer Kenta Cobayashi on a performance at “Unseen Amsterdam” (2017). In May 2019, PUGMENT opened in Ebisu, Tokyo, “People,” a space that combines office, studio, and retail, where participatory workshops and other experimental activities are carried out.

We take all the necessary measures in order to ensure the safety of visitors and our staff.