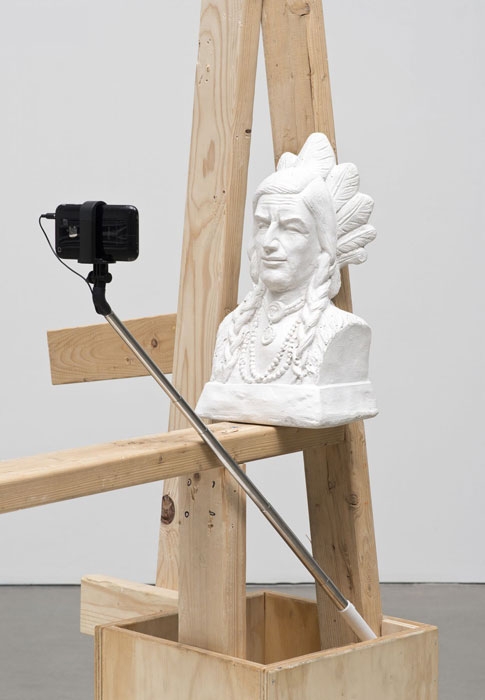 Regen Projects is pleased to present “Three Young Framers”, an exhibition of new work by New York-based artist Rachel Harrison. The exhibition reflects on what it means to frame a subject, in a time when subjects tend to frame themselves. A group of painted, abstract sculptures will congregate in the gallery, posing with selfie sticks like some sci-fi teen or tourist lifeforms. Metal studs erected in and around the perimeter of Regen Projects will also physically crop and frame the white cube, while nodding to Michael Asher’s 2008 Santa Monica Museum installation. In the back of the room, a reprise of Harrison’s “Marilyn with Wall” (2004) will be hung on a discarded, former gallery wall. And in a separate space, the artist will debut “FOMO” (2015), a set of thirty-four iPhone photos documenting footprints left in the snow.

The show takes its name from the 1914 photograph by August Sander titled “Three farmers on their way to a dance”, or “Young Farmers”, which depicts a trio of German peasants, self-styled in formal suits, walking along a rural path. With his physiognomic photographs, Sander aimed to capture a social type in a moment in time. Harrison’s “Three Young Framers”, in turn, finds itself at the beginning of the century of the selfie, when the picture’s vantage point is often that of self-absorption, and the man-behind-the-camera is conspicuously absent. “Three Young Framers” is Rachel Harrison’s second solo presentation with the gallery.

Rachel Harrison (b. 1966) lives and works in New York. Her work has been the subject of numerous solo exhibitions worldwide. Recent solo exhibitions include “Who Gave You This Number?”, NYU Institute of Fine Arts, New York; “Fake Titel”, kestnergesellschaft, Hannover, Germany; “Consider the Lobster”, Center for Curatorial Studies, Hessel Museum Bard College, New York; “HAYCATION”, Portikus, Frankfurt am Main, Germany and “Conquest of the Useless”, Whitechapel Gallery, London, England. Her work was included in the 50th and 53rd Venice Biennale and the 2008 Whitney Biennial. An upcoming exhibition “Gloria: Robert Rauschenberg & Rachel Harrison” will be held at the Cleveland Museum of Art (July 1 – October 25, 2015).