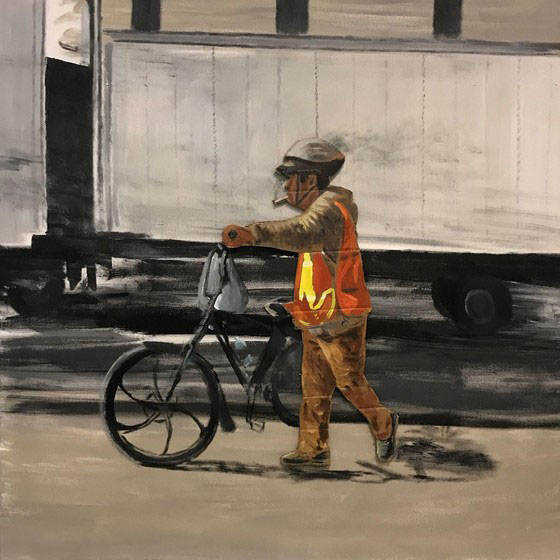 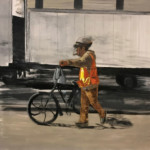 P·P·O·W is pleased to announce “In NYC”, Ramiro Gomez’s first solo exhibition in New York City. A painter with a deep interest in depicting the people whose labor often goes unrecognized and underappreciated by society, Gomez creates pristine domestic scenes and landscapes populated with subjects whose work is essential to creating and maintaining those very spaces. While Gomez is best known for his depiction of workers in his West Hollywood neighborhood, for this exhibition he turns his attention to New York City, with a series of paintings that captures the oftentimes invisible labor that goes into making the city a functioning and sustainable place.

The son of undocumented Mexican immigrants who have since become U.S. citizens, Gomez experienced firsthand the ways in which certain occupations are reduced to invisibility and, though essential, are written out of the primary narrative of a family, building, or public space. While he was a live-in nanny for a family in the Hollywood Hills, he felt the full effect of what it was like to at times be invisible, an experience that became formative to his work and which continues to drive much of his subject matter. Much of Gomez’s work is concerned with the ephemeral – his art captures fleeting moments in time that would otherwise be forgotten or go unnoticed – a gardener watering a lawn, a housekeeper sweeping a floor, or a laborer lifting a package onto a truck. Gomez gained wide recognition for his work in the 2017 Whitney Biennial, in which he painted the laborers and workers who play an essential behind-the-scenes role in the functioning of a museum. In December of 2018 he continued this performative project at P.P.O.W’s booth at Art Basel Miami Beach.

For “In NYC”, Gomez wandered the bustling streets of New York, taking photos of the many laborers whose work is vital to sustaining a functioning city – from yard workers who keep parks lush and pristine to babysitters minding children to janitors picking up trash – and turning them into the subjects of his paintings. From the start of his career, Gomez has created works on non-traditional art materials, often selecting salvaged cardboard or discarded lumber to use as his canvas. Cardboard, in particular, became central to Gomez’s practice, as it is one of the most accessible and disposable materials. This material resonated with Gomez as an apt metaphor for the precarious nature of the position that various domestic laborers, many of whom Gomez worked alongside with as a nanny, find themselves in. The exhibition will feature works created on these salvaged materials, including a series of portraits painted on cardboard, which Gomez cuts out and glues onto canvas.

This exhibition continues Gomez’s interest in capturing the way this ‘background’ labor transforms a city, as through these paintings, he brings his subjects to the foreground of the scene, elevating them from underrepresented laborers to revered subjects. Through his depiction of subjects who turn away from the viewer, Gomez brings to light the way in which society creates a division between labor and a culture of shame, as well as calls attention to this ‘invisible’ aspect of labor by way of, as Lawrence Weschler writes, “Recognizing workers, acknowledging to them that they are worth being recognized.”

Gomez first gained recognition for what is now described as his “Hockney” series, works that reimagine David Hockney’s iconic Los Angeles paintings to represent subjects previously omitted from the story – gardeners, housecleaners, movers, valets, and nannies. Gomez perceives himself as both an insider and an outsider, a tension that he explores in his work. Even while now being formally invited into commercial and institutional spaces, Gomez retains the guerrilla nature of his work, creating an interruption in the space he inhabits and encouraging viewers to consider aspects of their everyday lives that are not often depicted in visual art.

Ramiro Gomez was born in 1986 in San Bernardino, California, and currently lives and works in West Hollywood, California. He attended the California Institute for the Arts for one year before leaving to take work as a live-in nanny with a West Hollywood family, an experience that did much to inform his subsequent artistic practice. Gomez had his first solo exhibition in 2013 at the UCLA Chicano Studies Research Center and was awarded a residency to install a mural in West Hollywood Park. The project, titled “The Caretakers”, remains on view. Gomez’s work has been the subject of solo exhibitions at the University of Michigan, Institute for the Humanities and the West Hollywood Public Library as part of “Pacific Standard Time: LA/LA”. His work has also been featured in group shows at notable institutions including: the 2017 Whitney Biennial; Los Angeles County Museum of Art; the Denver Art Museum; Blanton Art Museum, University of Texas at Austin; Museum of Contemporary Art San Diego; the National Portrait Gallery, Washington, DC; and the Cornell Fine Arts Museum at Rollins College, Florida; among others. His work is the subject of the catalogue “Domestic Scenes: The Work of Ramiro Gomez” by Lawrence Weschler.