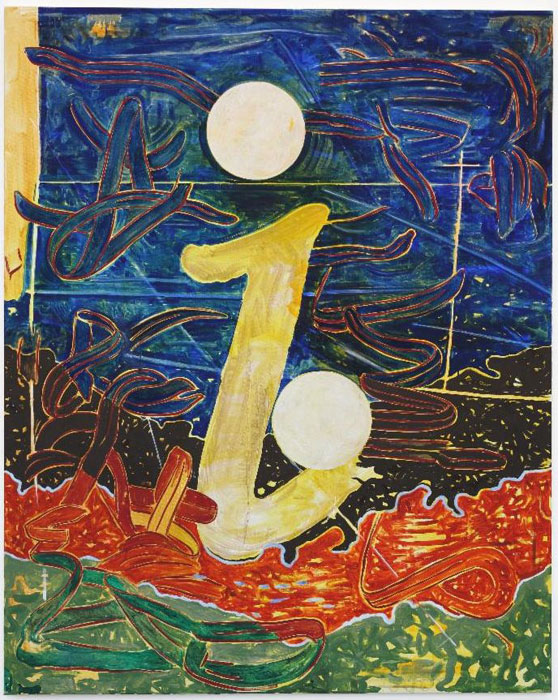 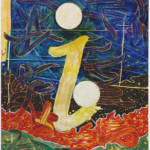 Rasmus Nilausen’s appetite for linguistic sleight of hand is evident in his playful dissections of the nature of painterly representation and authorship. The self-aware and irreverent works in “Eye Dialect” provoke a consideration of the ontological quality of studying a painting that is studying itself, unraveling the psychology of the relationship between viewer, author and artwork. Nilausen uses a thin application of paint and careful calibration of opacity and transparency to describe and dematerialize, suspending forms and surface between objecthood and mirage. In “Reflex Edit”, for example, a pair of disembodied hands present a monumental slab or tome; however, its substantive heft and depth is called into question by wispy edges and the “.docx” rendered on an upper corner. This blank slate could be either a digital figment or marble slab proffered for inscription with hammer and chisel, but the ambiguity of its material presence suggests that the medium itself, not the content it awaits, is the subject.

Nilausen repeats motifs across works as acts of external or self-referential quotation rather than reproduction. This process is not imitative but iterative; repeating a simple function to generate increasing complexity. “Saliva” is a satirical fetishization of painting, a field of washy Robin’s-egg-blue brushstrokes whose contours the artist has transformed into wagging or lapping tongues. Outlining the gestural brushwork, Nilausen makes of the exigent and intuitive a rehearsed performance now fixed in place. This Lichtenstein-esque treatment plays with artifice and authorship, and hones in on the temporal conditions of the painting’s existence. In another picture, these animating outlines are performed on a ground of luxurious, golden brushstrokes. A ghostly sheet of blank paper hovers over the glowing ground, and two opposing chevrons and an ellipsis are rendered in a nocturnal blue. The title of this painting is “Dorian’s Dream”; assuming Dorian’s surname to be Gray, we can surmise the dream is of beauty untarnished by time. Wilde’s novel is a fitting work for examining aesthetics and representation, and Nilausen further employs it as the self-referential metaphor Wilde intended; the inescapable narcissism of creation, be it as a painter, playwright, or parent, is the impulse to create that which will outlast you.

Body language is our most intuitive and ambiguous means of conveying information, though language may be somewhat of a misnomer since it is not governed by grammar or reliant on signs. “Eye Dialect” sits somewhere between a sign and body language, embracing immediate perception yet deeply ingrained in the mechanics and symbols of language and mediums of expression. The punctuation and letters that populate “Eye Dialect” are enigmatic and corporeal characters rather than glyphs, and appear acutely self-aware, perhaps as a natural result of their expressive capacity. The bipedal brackets or side-eye glance of anthropomorphized quotation marks exemplify this conflation of an individual with the mechanics of language, the manner in which identity suffuses or fuses with our method of expression. The reappearance of the tongue – a homonym for language – further emphasizes the personal and physical roots of communication. Language, in Nilausen’s adopted home of Catalunya, remains fraught with social, cultural, and historical politics; sense of self, sense of place, self expression and formulation of place are all enmeshed in an individual’s choice of idiom. And, regardless of one’s choice, it is repeatedly offset against an antagonized and antagonzing other.

Nilausen has had numerous one-person shows both in Madrid and in Barcelona. He has also had solos in Amsterdam, Copenhagen and Nurenberg. Although he has been included in numerous group shows across Europe, this is his first showing in the United States.