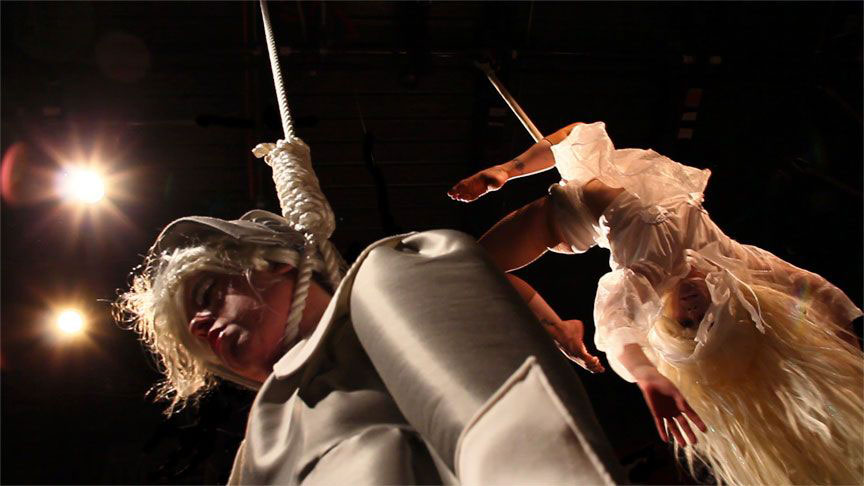 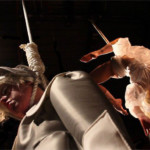 Freight + Volume is pleased to present Rebecca Goyette’s new solo exhibition, “Ghost Bitch U.S.A.”. For her third solo project with Freight + Volume, the artist will present a multi-media exhibition including two new films along with performances, sculptures, and works on paper.

Rebecca Goyette’s video and multidisciplinary work reflects her complex view of sexuality, specifically the notion of fantasy from a feminist perspective. This progressive point of view and her penchant for the bizarre are apparent in her artistic practice, which involves embodying a broad range of characters in an ongoing series of psychosexual scenarios, acting as both director and protagonist in the two “Ghost Bitch” films. Her latest alter ego and the catalyst of this exhibition is an apparition of her ancestor and namesake, Rebecca Nurse, a witch hanged in Salem. Witch by day and dominatrix by night, Goyette’s character connects America’s barbaric beginnings with her own personal trauma of a childhood spent in smalltown New England, culminating in a satirical lampooning of contemporary political turmoil.

“Ghost Bitch U.S.A.” is another mythic fable, again following our heroine as she and her supporting cast of characters rectify paternal betrayal, alluding to modern politics and personal trauma, possibly ensnaring a certain Presidential candidate with purportedly “small hands.”

In conjunction with the films, the artist has created drawings, sculptures, and paintings inspired by Goyette’s personal and ancestral psychological history, pulling directly from her films. The magical objects, costume pieces and fragments from both Ghost Bitch films are presented on a monumental, fully-functioning altar to be activated in a participatory ritual on July 22nd from 6-8 pm led by Demetrius Lacroix, a member of the “Ghost Bitch” cast and spiritual advisor from Salem, MA.