Rebecca Goyette – My Snake Is Bigger Than Your Snake 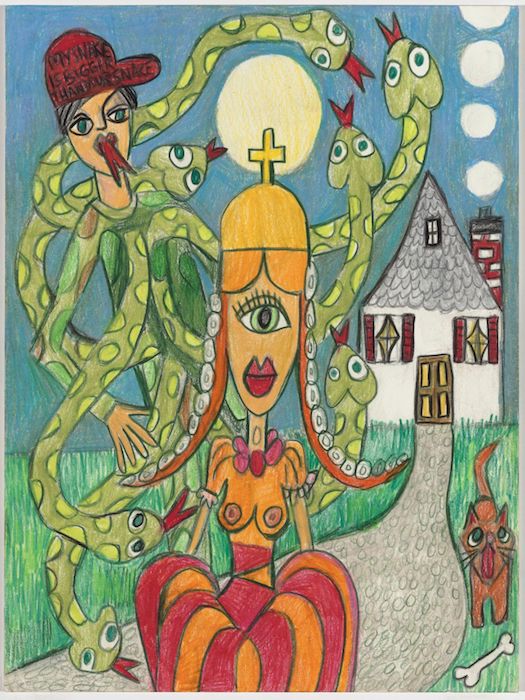 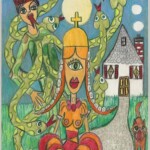 Freight + Volume is thrilled to announce “My Snake Is Bigger Than Your Snake”, an exhibition of a new body of work by Rebecca Goyette.

“My Snake Is Bigger Than Your Snake” is an exhibition initially conceived in 2018 when artist Rebecca Goyette’s father passed away and she placed her childhood home on the market. Goyette immediately started to create a ceramic replica of the house, fashioned after a dollhouse that her father had crafted when she was five. For Goyette, who has an interest in magic, “Childhood Home” was designed to set off prosperous intentions. She ended up selling her father’s actual house to a man wearing a shirt that read: “My Snake Is Bigger Than Your Snake.” Goyette was dressed in red, carrying a lobster-shaped purse so she could safely carry the sizable check back home to NYC on the Greyhound bus. Goyette saw this comical exchange as a face-off between “Lobster Queen” and “Snake Man”.

As often happens for Goyette, she got an urge to bring her characters to life in an art film. She began to draw the characters, make costumes, and map out a plan. Goyette presents here an interdisciplinary ode to all things “Snake Man”, incorporating ceramic sculptures, soft costuming, drawings, and a video featuring live-action and animation.

Rebecca Goyette’s current body of work hinges on contraries. In her video work, she’s a lobster as much as she’s a woman costumed in lobster garb. She’s a radical feminist, yet she alludes everywhere to the repressive, and quite often openly misogynistic history of her native New England. Her work may initially come across as shocking or even distasteful in a John Waters-y sort of way, but anything more than a cursory glance reveals the willful act of conscience that underlies her artistry. This is also befitting to the New England character of her work.

The Transcendentalism of Emerson or Thoreau shines through in the way Goyette’s works communicate a sort of generous self-interestedness. While her work, in any medium, will scare off the socially liberal and fiscally conservative, she’s always welcoming enough that even her enemies could stand to learn something from her. When she makes a satirical effigy, for example, of a MAGA hat-wearing Snake Man she once crossed paths with, I think the person her sculpture is modeled on would probably see his own ignorance reflected in her work – and from there begin to question his values. I also like to think that Goyette would welcome his transformation of consciousness. After all, this is the supreme caveat of Goyette’s artistic vision: you can gaze on it only so long as you allow it to change you, becoming less a voyeur and more of a voyant.

The soul of “My Snake Is Bigger Than Your Snake” lies in the titular video work. This video was shot “on location,” as it were, in the artist’s Brooklyn apartment. The use of quotation marks here lends the work the proper metaphorical distance that characterizes it. However ribald and experimental the video is (it stars actual members of Goyette’s queer/artist family), there’s still an aura of simulation about the whole thing. On the most rudimentary level, this air of simulation relates to the overtly sexualized aspects of the video. While I’m writing this in the Year of our Lord 2021, Goyette has deliberately chosen not to show anything that could be construed as pornographic. Instead, she allows her cast to playact their kinks, inviting viewers to simulate these same kinks within themselves.

On this level alone, one can say that Goyette reaches out to her audience in terms of a compassionating awareness. But one also has to consider her approach to characterization. Goyette’s father, who recently passed, was not only an inveterate dog lover but a kind of small-town bon vivant. In Goyette’s recreation of him in her video piece, she transforms him into a dog. Not a literal dog, mind you, but someone with doggy habits and kinks. This tension between the literal and the metaphorical informs the genuine magic that is Goyette’s artistry.

Consider the place of lobsters within her work. Working across a host of different media (ceramics, video, drawings, and sculpture, to name only a few), a fire-apple red, or lobster-like coloring is apparent in quite a number of her pieces. This is for cause. A lobster, of course, is something of a New England specialty. But in Goyette’s cosmogony, lobsters are sexualized beings even before they’re considered appetitive delicacies. The mating habits of lobsters feed into the whole of her oeuvre.

Lobster sex entails an extensive courtship that relies, ultimately, on complete vulnerability – what, in anthropomorphic terms, one might call faith. The female selects a mate based on her confidence that he will protect her as she molts her shell. Throughout this process, she is completely vulnerable – open to all kinds of threats. But if the male does his job (as she trusts he will), the reproductive process can begin. After mating, a lobster can carry up to 100,000 eggs. I feel like this connection between lobsters and Goyette’s work explains her incessant fecundity. Sex is more than a Freudian act of instinctual release; it’s a mythical process, a kind of Passion, the stages of which Goyette’s work visually articulates.

Paradoxically enough, the Virgin Mary serves, along with Goyette’s father, as another guide in this psychosexual journey. Goyette claims to have experienced direct communication from this Christian goddess, and I don’t see any reason to doubt her. Across the millennia, Marian images have served as a protector and guide. For Goyette, the Holy Mary is the symbol of the ultimate orgasm. Rather than experiencing merely carnal and penetrative sex, the Virgin Mary was fucked by the entirety of the universe. The destined bliss of this event is known as legion by the many, and religion to the chosen few.

Rebecca Goyette’s interdisciplinary practice combines video, performance art, costuming, ceramic sculpture, drawing, and painting to reflect on fantasy and fulfillment from a feminist perspective. Her practice explores the power dynamics and oppression inherent in gender and sexuality, celebrating sex positivity through a comedic lens, while simultaneously examining the psychology of sexual violence. Goyette’s video works and related props/objects draw from archival research, Puritan history, the annals of witchcraft, and personal narrative. She embodies a broad range of characters in an ongoing series of psycho-sexual scenarios, acting as both director and protagonist in these vignettes. Goyette recounts the psycho-sexual dramas of her direct ancestor, Rebecca Nurse – who fell victim to the gallows in the Salem Witch Trials – in her body of work titled “Ghost Bitch Dramas”. She enacts the mating dance of lobster in costumed satirical Lobsta Porns. Both of these primary characters are reflective of her small town Massachusetts roots, as well as a complex relationship with her father, whose eccentricities play out in her personal mythology, particularly in the “My Snake Is Bigger Than Your Snake” body of work presented here.