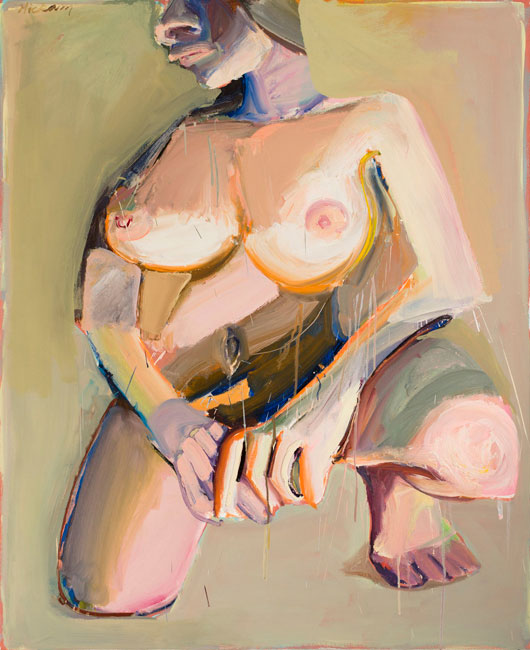 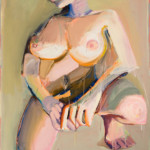 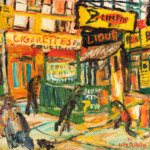 Richard Hickam‘s portraits reveal a dedication to gestural abstraction with an emphasis on emotional confrontation. His paintings of provocative characters illustrate the artist’s penchant for raw figuration that is fundamental to his visual vocabulary. Originally interested in photorealism, Hickam pursued a looser approach to figuration in the 1980s. Influences of Fauvist Matisse as well as the loose angularity of early Diebenkorn are apparent in this period. Harkening to historical painters such as Chaim Soutine and Francis Bacon, and foreshadowing contemporary artists such as Dana Schutz or George Condo, Hickam reconciles feelings of detachment with a sense of compulsion in his evocative paintings.

Philip Sherrod is known for his pulsating paintings of street and city scenes. He was a founder of the Street Painters group in 1977 along with artists who studied and taught at the Art Students League. In this body of work, he portrays New York as he experiences it, with excitable energy that seems to vibrate from within the painting. Buildings, storefronts and signs feature heavily in Sherrod’s paintings, underscoring the tenets of American urban culture. The humble settings of coffee shops, subway stations, Broadway marquees and even the circus are arranged in a cacophonous manner that transports the viewer to an earlier time. Sherrod’s paintings continues the tradition of portraying urban life set forth by the Ashcan School in the 19th century.

Philip Lawrence Sherrod was born in 1935. He received a BA in Painting in 1959 from the Oklahoma State University and attended the Art Students League in the early 1960s. He is the recipient of several awards including a National Endowment for the Arts Grant in 1982 and a Pollock-Krasner Grant in 1989. His works are in the public collections of the Hirshhorn Museum and Sculpture Garden, Washington D.C., the Museum of the City of New York, the Rose Art Museum of Brandeis University, the Rhode Island School of Design Museum, among others.