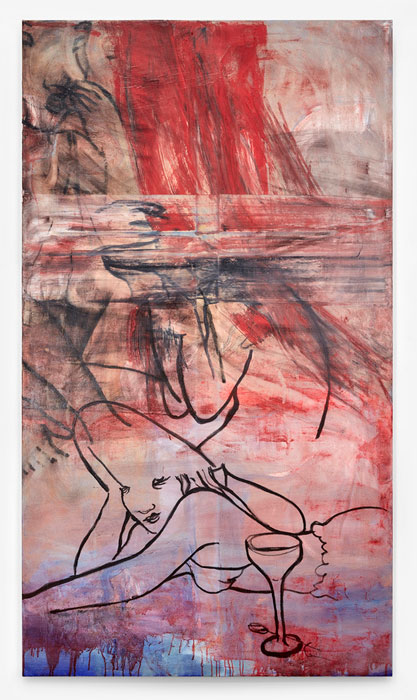 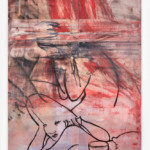 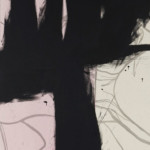 Beginning 10 November 2016, Hauser & Wirth is pleased to present ‘Kline Rape’, an exhibition of new paintings by Rita Ackermann at the gallery’s new temporary home at 548 West 22nd Street. The exhibition will feature two bodies of work by the artist: Stretcher Bar Paintings and the Kline Rape series. ‘Kline Rape’ will also feature a performance by Ieva Misevičiūte, a new, site-specific work inspired by Ackermann’s paintings. Performances will take place within the exhibition.

Gean Moreno on the work of Rita Ackermann
There is no ideal compositional balance or aim sought to guide the effort, no external metric to judge the work’s success. It’s only the experimentation, which much to do with cumulative effects as with negational gestures and undermining, with the piling up of contradictory elements and disjunctions, that slowly congeals into something. Whatever tension and affective charge the work ends up with is intrinsic to its development. A machine that ruthlessly disorganizes its own forms and tears itself from expectation. Her paintings feel as if they can turn themselves into intense field of tension by dismantling incessantly whatever forms and materials are applied to them. Disjunction and incommensurability animate them. They’ve arrived at a strange threshold of production: they seem to make themselves. In fact, each is a testament to Ackermann’s tenacious catching up to them and the work’s indefatigable drive to push on, to stay ahead of the body that makes them.

Ackermann’s ‘Stretcher Bar Paintings’ take their title from the emergence of x-ray-like imprints which surface when impressions of paint and pigment become transpired with the structural presence of the picture plane itself. Rather than correcting the effect, Ackermann has decided to embrace this anomaly, forging the series after their disadvantage. Proportionate to the human body, the synthesization of such attributes form fractured compositions whereby background and foreground collapse; a painting revealing only as much as it conceals. Generating polarity charged by forms in opposition; Ackermann’s ‘Kline Rape’ paintings merge the masculinity of Franz Kline’s iconic expressionism with provocatively sensual lines that signal the universal feminine. Suggesting concurrent discord and reconciliation, the artist’s sinuous colors and expansive brushstrokes envelope an engagement of both form and allusion. Nevertheless, the images of Ackermann’s ‘Kline Rape’ provokes immediate readability as ubiquitous common signage.