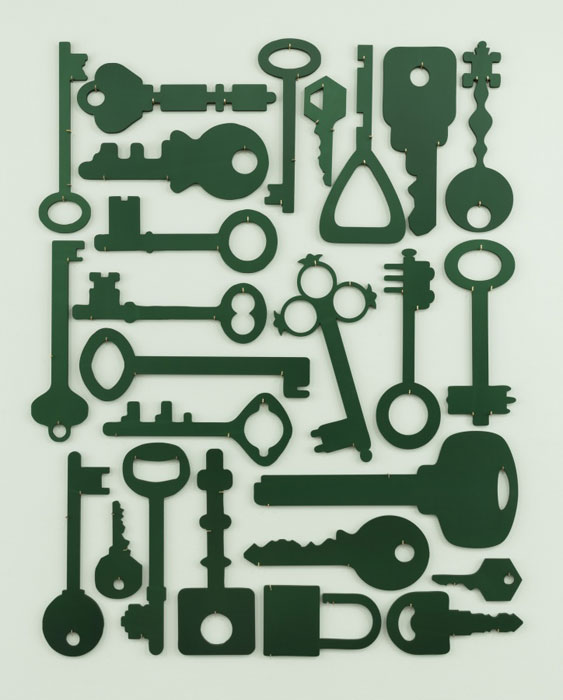 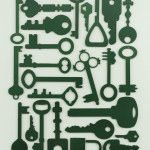 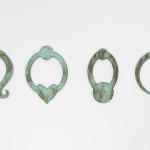 Keys unlock, chart, guide and connote societal structures. Their functionality is dependent on contexts and norms of access within communities. Just as keys are only capable of opening certain locks and are meaningless without the knowledge of its corresponding lock, the key as sign or ornament of society’s visual organization is reliant on specific contexts to extract meaning. At the same time, a key connotes a certain level of power and status; the more keys you have corresponds to increased access to otherwise inaccessible locations and contents. McBride’s recent exhibition at Konrad Fischer Galerie in Düsseldorf was titled “Gesellschaft”, a term used to define a rationally developed mechanistic society characterized by the absence of binding norms, and a detachment from traditional and sentimental concerns. Similarly, a lock and key maintain a rational relationship which parallels institutional structures within society.

McBride’s exhibitions question and examine systems of display. The installation of elements which comprise a work are not fixed but rather combined and redistributed as gestures to the exhibition space. The works in “Gesellschaft” and “Access” are titled after countries and regions. Their mutability recalls board games where places are won and lost, combined and uncombined.

Rita McBride lives in Los Angeles and Germany where she is the Rektor at the Kunstakademie Düsseldorf. McBride has completed four large permanent public works including “Mae West”, a 170-foot high, 57-ton rotational parabola. Installed on the Effnerplatz in Munich, “Mae West” is one the world’s largest sculptures and the first of its kind to be built of carbon fiber. A new public work, “Artifacts (C.W.D.)”, an aluminum grid structure with 21 panels of Tiffany glass shards, commissioned by the NYC Department of Education, the NYC School Construction Authority Public Art for Public Schools Program, in collaboration with the NYC Department of Cultural Affairs Percent for Art Program will open at PS 315Q this September. The glass shards were discovered during initial construction on the site, which was formerly a Tiffany factory.

McBride’s work has been the subject of numerous solo museum exhibitions, the most recent of which were held at Museo Tamayo, Mexico City and the Museum of Contemporary Art, San Diego. The kestnergesellschaft in Hanover and the Kunsthalle, Düsseldorf are collaborating on a solo exhibition and publication which will open in Hanover in October and travel to Düsseldorf in spring, 2016.