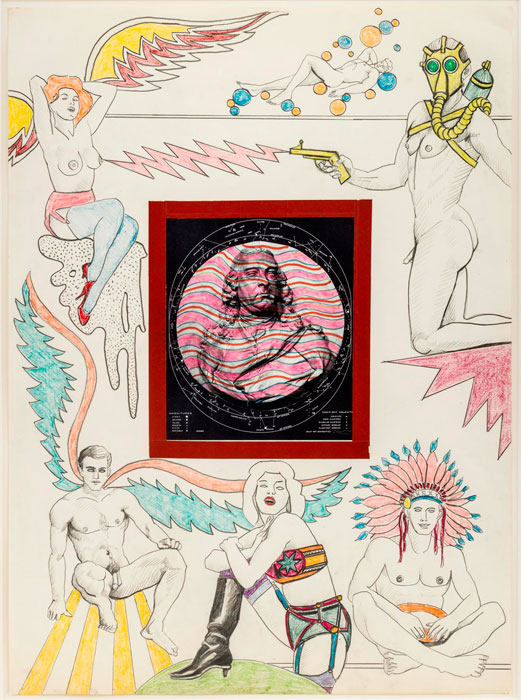 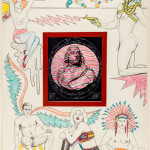 James Cohan is pleased to present “Pop”, an exhibition of the late Robert Smithson’s works on paper and select sculpture from 1963-65. This exhibition marks the debut of James Cohan’s second NYC gallery space located on the Lower East Side.

In 1963, at the age of twenty-five, Robert Smithson was immersed in the vitality and experimentation of the burgeoning downtown New York art scene. Smithson fed on the clashes of style, form and meaning found along his rambles through the city; from the downtown kiosks hawking porno magazines and comic books, to the movie houses of Forty-Second Street with their “low budget mysticism of horror films,” to the mineral displays at the Museum of Natural History, and across town to the Met’s Byzantine paintings and the “cold glass boxes” along Park Avenue. From this absorption of thecity, Smithson developed his complex theory of entropy and the symbolic language he used to explore it. Art critic Carter Radcliff explained that for Smithson “meaning emerged from the disintegration of meaning,” and “in 1962, that argument flowed from the restless ironies of his hand.”

Smithson’s prolific drawings from this period, including those about language and Christian iconography, sought out disorder from the hierarchies of social conventions and popular culture. The series of drawings on view at the gallery are composed like biblical panel paintings with collaged or drawn elements in the center of the page surrounded by free-floating figures in nested zigzag motifs. The erotic imagery includes male and female nudes depicted as American icons sporting baseball caps and scuba masks, lifting weights, and riding horses, while others are pin-ups and action figures recast from legend with wings and thunder bolts. The works in “Pop” highlight Smithson’s search for what curator Eugenie Tsai referred to as “comparative mythologies,” or modern-day equivalents to the archetypal models established throughout the history of human culture.

Today, fifty years later, the works continue to resonate for their timeless dualities – the popular and the rarefied, the modern and the classic, the sacred and the profane, while they give us insight into the imagination of an artist who was to become one the defining figures of the 20th century.

Robert Smithson (b. 1938, Passaic, New Jersey, d. 1973, Amarillo, Texas), was an American artist, internationally renowned for pioneering the earthworks movement of the late 1960s and early 1970s. Smithson is most well-known for taking artwork out of the confines of the white cube, with his iconic earthwork, “Spiral Jetty” (1970), as well as other land art works such as “Broken Circle/Spiral Hill” (1971), and “Amarillo Ramp” (1973). Smithson studied painting and illustration at the Art Students League of New York as a young man, and by 1963 had five solo gallery exhibitions.