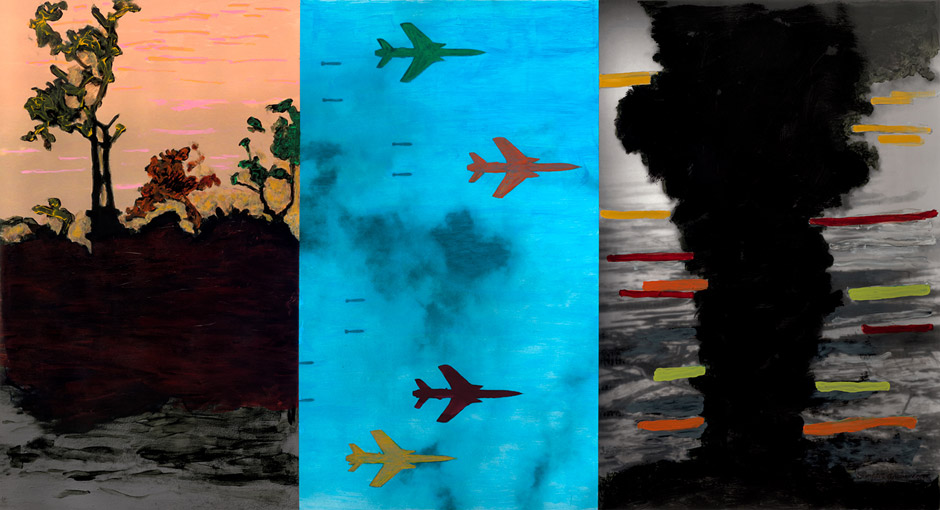 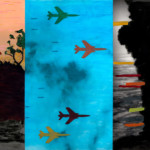 Rena Bransten Gallery is pleased to present “Rupert Garcia: Rolling Thunder”, an exhibition of paintings and prints by renowned Bay Area based American artist Rupert Garcia. Since the late sixties, Garcia has been committed to creating artwork addressing urgent issues of our time, voicing concerns over the desperate consequences of social and political injustice and deceit, as well as raising questions about the pretenses of aesthetic conventions. In strikingly bold graphics, often coopting the mechanics of pop art and culture, his recent work elaborates on his political concerns, and challenges notions of folk and high art.

“Rolling Thunder”, a survey of five decades of work, exposes his continual use of war imagery and suggests the impact of Mr. Garcia’s service in the Vietnam War and direct involvement in a secret US military bombing campaign known as “Operation Rolling Thunder”. This is the first time Mr. Garcia’s work has been assembled to specifically illuminate the impact of his participation in the Vietnam War, and the first time Mr. Garcia has publicly acknowledged his participation in “Operation Rolling Thunder”.

As he states, these works reveal “a pivotal set of experiences that have never left me and that I would later indirectly reference in my work by referencing various wars the US was involved with over the years until 2017.” While Mr. Garcia joined the US Airforce and requested to be sent to Vietnam ‐ certain of the cause and enamored “of the sculptural beauty of the jet fighter bombers, their awesome and frightening roar at takeoff…” ‐ it was when he returned home that he was able to contextualize his service with a fuller understanding of the political forces that drove the war:

– “knowing that these magnificent machines of war fly off to bomb, kill, and destroy”
– The all too familiar and nauseating “race question” at home manifested on the air base in Ubon, Thailand in racial tensions between black and white airmen. A comparison between “the war in Indochina and the war against racism back in the US”
– That “what led up to this mission was the LIE that [sic] an unprovoked second attack by North Vietnamese patrol boats on the US naval vessel Maddox”

Two new works are a direct response to this experience. The triptych “Rolling Thunder” (2017) includes imagery of the landscape outside his air base in Ubon, F‐105 jet fighter bombers, and the North Vietnamese oil tanks which they hit. The self‐portrait “Hoodwinked” shows Garcia in military uniform with his “Australian military hat,” worn to veil their secret US presence. His Vietnam Service Ribbon blinds his vision, referencing the false pretenses under which the operation was being carried out.

“The paradoxical “aesthetics of war” as represented in the phenomenology of the pictorial and sculptural components of the machines of destruction, the fire of consumption, the evidence of death and devastation profoundly fascinate and puzzle me.
I do not believe that war is the way to solve human problems. The cost of human life is too high. The social and political exchange between adversaries is the only humane way to resolve conflict.” (Rupert Garcia, 1996)

He lives and works in Oakland, CA.