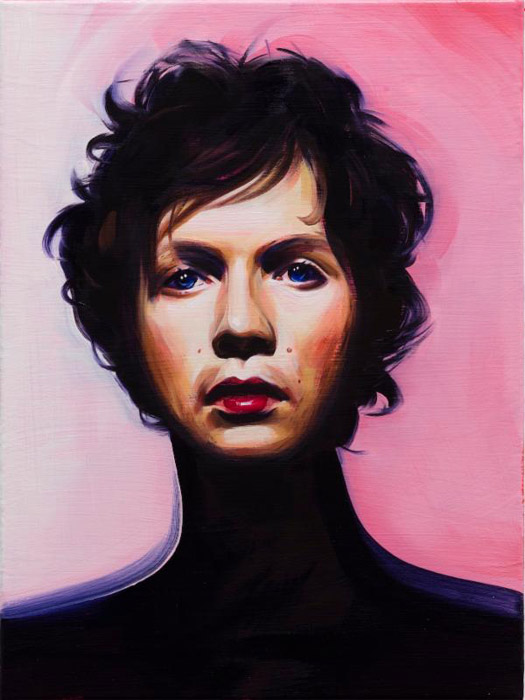 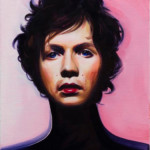 Team (bungalow) is pleased to announce a show of work by New York-based artist Sam McKinniss.

“I was meant to know the plot, but all I knew was what I saw: flash pictures in variable sequence, images with no ‘meaning’ beyond their temporary arrangement, not a movie but a cutting-room experience.” (Joan Didion, The White Album, 1979)

McKinniss has made a grouping of nine new paintings to be exhibited together under the title “Daisy Chain”. The city of Los Angeles inspired the choice of subjects, although a narrative of innocence and its destruction is the real thread here. The paintings, all intimately scaled, depict movie stars, pop singers, animals, book illustrations, landscapes. These images stitch themselves together, revealing a national obsession with creating, then desecrating, icons of purity. Behind these beatific paintings – a fantasia of greeting card images – lurk cults, suicide, murder and drug addiction.

In selecting the images that make up this exhibition, McKinniss has touched upon popular and mass culture, middle and high-brow. In the degree to which a visitor recognizes one or more of these subjects, a shortcut is forged between the painter and his audience, a shortcut that bypasses irony, erases distance and eases the triggering of emotional effects.

McKinniss’s choices both limit his audience – “I don’t like Drew Barrymore.” “Who is A$AP Rocky?” – while privileging those who remain, validating the viewer’s own cultural knowledge and enveloping them in a memory of love – “That’s Whitney Houston when she sang the ‘Star Spangled Banner’”. “My God, JonBenet Ramsey was so beautiful.” In these instances of reflection, the artist is no longer master but fellow fan, allowing his audience to access a shared sense of transcendent joy or sorrowful loss; a moment of catharsis.

In the range of subject matters, one can find numerous clues to the “make-up” of McKinniss’s psyche and, therefore, his world-view. For example, the democratic and leveling nature of Tumblr mates easily with the artist’s fascination for middle-brow artworks hung in regional museums. McKinniss’s adoration of figures such as Winslow Homer, Fairfield Porter, Mary Cassatt and Maxfield Parrish is not reactionary but, rather, stems from his childhood visits to the New Britain Museum of American Art, located down the street from his home.

Although there is a tendency to link McKinniss to painters such as Elizabeth Peyton and Karen Kilimnik – largely due to the confinement of much of their output to smaller scales – it is more enlightening to pair McKinniss with other contemporaneous practices such as Luc Tuyman’s gray-scale, funereal politics, Pablo Bronstein’s architectural Capriccios or Jamian Juliano-Villani’s hyper-real painted patchworks. What McKinniss’ work shares with this latter group of artists is a relationship to fact.

Throughout McKinniss’s work, a hierarchy of knowledge is in play. This shows particularly in “Beck”, 2017. The painting is a portrait of the singer/songwriter/producer Beck Hansen. The source image, which many would simply assume to be a promotional photograph, is a video still created by the fine artist Jeremy Blake. Both Blake and Beck are identified with the Church of Scientology – seen variously as a religion and as a cult. The McKinniss painting references the suicide of Blake and, by extension, the tragic relationship of Blake and Theresa Duncan, both of whom died by their own hand, citing as the cause a vast conspiracy of persecution by a cabal of Scientologists.

The McKinniss painting functions as a double-portrait – of the present Hansen and the absent Blake; one portrait “painted” on top of the other. All of this knowledge is rewarded. However, the artwork also rewards a complete lack of extratextual information. The sensuous and accomplished manner in which the painting has been rendered, the lusciousness of the palette, the presence of abstraction, the immediacy of the scale, also function to deliver pleasure to a viewer and to represent McKinniss’s intelligence and skill.

McKinniss’s artworks foreground the notion of recollection in a hyper-mediated world. Although his subject selections usually reference the decades of his childhood (the 80s and 90s) and, therefore, the aesthetics dominant in that era, his more contemporary choices, like Lana Del Rey or an aged Joan Didion, are also inflected by that same pastness. Beauty and innocence, in the American vernacular, appear stuck in a post-Reagan-era loop. Nothing in McKinniss’ work stretches back to the Summer of Love, yet many of the works in “Daisy Chain” bear the stamp of flower power. However, that stamp does not bear the radicality of the late 60s, but rather its cultural deployment as a signifier divorced from historicity.