Sanam Khatibi – An hour before the Devil fell 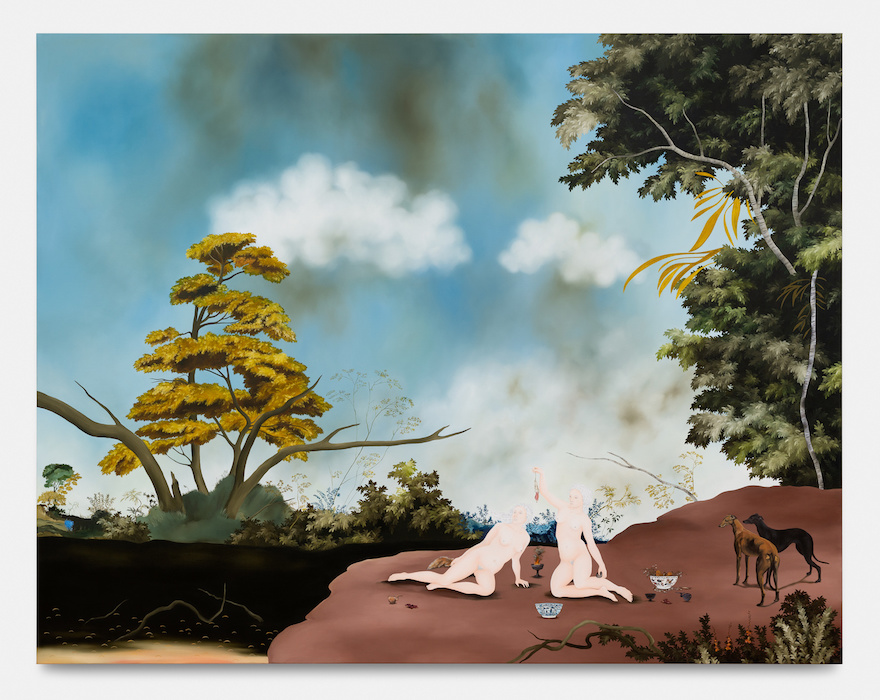 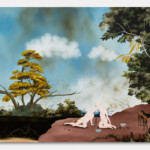 P·P·O·W is pleased to present “An hour before the Devil fell”, Sanam Khatibi’s first solo show in the United States. Featuring new paintings by the self-taught Belgian artist, this exhibition both captivates and repels in its interrogation of personal and political power structures within its entirely ambiguous, impartial, and sometimes cruel setting. Reframing allegorical scenes in alluring, exotic and incredibly detailed landscapes, Khatibi creates worlds where primal impulses and unrestrained judgement rein. Here nymph-like figures conquer and are conquered in equal measure by the flora and fauna around them. Adorned with waves of unpainted hair, these women are ambiguous in their relationship to power, violence, ritual, sexuality, and each other

In addition to her painting and drawing, Khatibi intuitively utilizes multiple mediums such as sculpture, ceramics, and embroidery to create and inform her work. Describing the dialogue intrinsically created between her sculptural and painterly objects Khatibi says “I tend to sacralise objects, and by doing so, I create an interaction with all things I collect and make. It’s like creating a language of my own, and I have always considered this inherent ability as part of my practice”.

“Employing her own visual vocabulary as well as a broad range of influences including Northern Renaissance painting, Pre-Columbian art, and Flemish and Bayeux tapestries, Khatibi turns her gaze for the first time towards American traditions, mythologies and underlying, harsh realities. Taking its title from a line in Arthur Miller’s “The Crucible”, which was written in the wake of McCarthyism, “An hour before the Devil fell” calls into question the puritanical power structures that define the proverbial person. Sanam Khatibi’s work both exalts and cautions against the fine line between triumph and failure, peace and brutality, and ultimately, civilization and destruction.

Sanam Khatibi (b. 1979) was born in Tehran, Iran and lives and works in Brussels, Belgium. She is self-taught and has been featured in exhibitions around the world, including group exhibitions in Paris, Florence, Los Angeles, Mexico City, New York, Marseille, Vienna, and Warsaw, among others. Khatibi’s work is currently on view in “The Seventh Continent”, the 16th edition of the Istanbul Biennial curated by Nicolas Bourriaud. Recent institutional shows include “De ta salive qui mord”, BPS22 (Belgium), “Mademoiselle” at the Regional Centre of Contemporary Art of Occitan (France), “Quel Amour!?” at the Museum of Contemporary Art of Marseille (France), and “The Biennial of Painting” at the Museum of Deinze (Belgium).