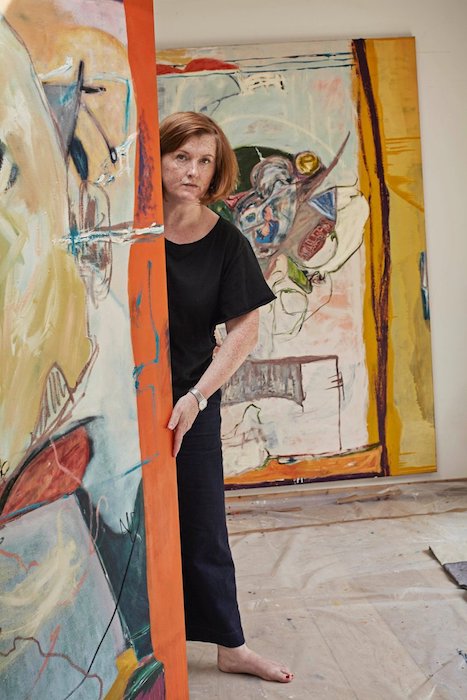 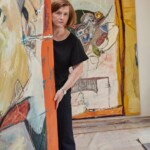 Sarah Dwyer in her London studio

“Tink” refers to a knitting stitch that equates to ‘unknitting’ or working backwards, to remove in order to change. It relates to Dwyer’s very physical method of working, wrestling with forms and ground until a balance of content and tension is achieved. In both her drawings and paintings, Dwyer jabs and jives at the surfaces, pushing the materials to reveal new relationships and advance our understanding of the nature of presence and absence.

The works in “Tink” expand on a freewheeling conversation about painting that Dwyer has been engaged in for over 15 years. New imagery is often generated by Dwyer through reworking old drawings or cutting up older canvases or etchings to open up fresh meaning through a process of removal and insertion. Through this regeneration of works, Dwyer confronts fears around the finality of loss while testing the temporality of now. The reworked surface becomes a metaphor for the bravery and vulnerability that life demands of us. Dwyer further develops the theme of humanity by embracing the body more than ever before. A hand, a breast, a reclining figure, a phallic suggestion – all are mischievously camouflaged but visible to the careful eye.

Dwyer’s interest in early modernism is felt in quiet moments of Bracque-like stillness or Fauvist color; lyrical episodes of drawing expose a more Surrealist element. Dwyer’s idiosyncratic lexicon of mark making is often applied faster than conscious thought. The double thread of spontaneity and control allows the work to explore both movement and stability. A figure in recline might be heavy on a deathbed one minute and then express lightness and vitality the next.

Drawing is at the heart of Dwyer’s practice. She translates references from the immediate environment of her busy studio often encountering images by chance: a picture in a book, a life drawing, a poem, a conversation or sketch with a friend. Anything familiar in the work is often made strange by Dwyer’s expanded drawing and differing scales of form. She creates a visual language that flickers on the edge of memory in the space where truth and invention merge. In the tradition of Lascaux, what might appear simple ultimately remains mysterious, timeless, unknowable.

Sarah Dwyer (b. 1974, Ireland) earned a Master’s in Painting from the Royal College of Art, London, in 2004 after an MFA from Straffordshire University in 2001. Dwyer lives and works in London.

Recent shows include “Out There Out Where”, Boston Manor House, London, “The John Moores Painting Prize”, The Walker Art Gallery, Liverpool, “New Order: British Art Today”, Saatchi Gallery, London, “I shall stay the way I am because I do not give a damn…” – Dorothy Parker, Jane Lombard Gallery.