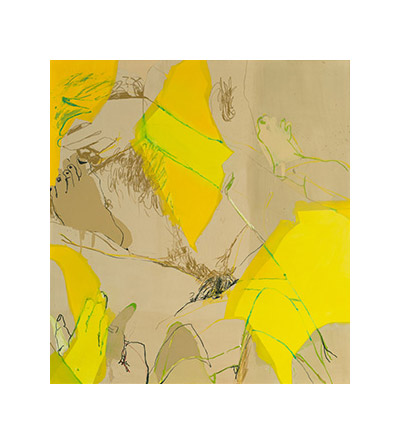 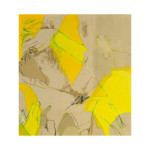 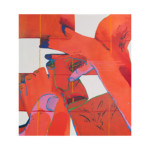 Thierry Goldberg is pleased to present “Seether”, an exhibition of new paintings by Sarah Faux. This is the artist’s first solo exhibition with the gallery, and her first in the United States.

In 1994, alt-rock band “Veruca Salt” released the song “Seether,” a grungy anthem with the refrain “Can’t fight the seether/ I can’t see her till I’m foaming at the mouth.” A seether, someone who’s seething, lives inside the female lead singer. That inner self is seething like the tiny bubbles that creep up the edges of a pot of boiling milk. In this group of paintings, anger, lust, and desire bubble up over and over again.

“As a woman in a world that objectifies the female form, I’m thinking about the body as object and agent,” says Faux. Scenes are often shown from a first-person perspective, and intimate relationships between figures exist in ambiguity, open to multiple interpretations and innuendo. The viscerally rendered surfaces, with painted grounds shifting underneath, serve to represent the familiar messiness of the bodies we inhabit.

While fragments of nude human forms appear amid amorphous shapes and flat expanses of color, they do so only tenuously, as outlines and certainties recede into the background as quickly as they coalesced. The relationship between line drawing and color alludes to power plays in sexuality. Both stylistic forces maneuver for respective narrative or emotional dominance, conveying the complexity of desire and the full range of experience that exists in the dichotomy between pleasure and pain. Ultimately, the intentionally challenging ambiguity of Faux’s compositions gives way to moments of intimacy, as the artist aims to evoke private, physical experiences.

Sarah Faux (b. 1986, Boston), currently lives and works in Brooklyn. She holds an MFA from Yale University, and a joint BA/BFA from Brown University and the Rhode Island School of Design. Her first solo show was held at Stems Gallery (Brussels, BE) in 2016, and she has recently exhibited in group shows at Fredericks & Freiser (New York, NY), yours, mine & ours (New York, NY), ltd los angeles (Los Angeles, CA), Cuevas Tilleard (New York, NY), Edward Thorp Gallery (New York, NY). Her work has been written about in Modern Painters, the Wall Street Journal, Interview Magazine, Hyperallergic, and Artsy, among others.