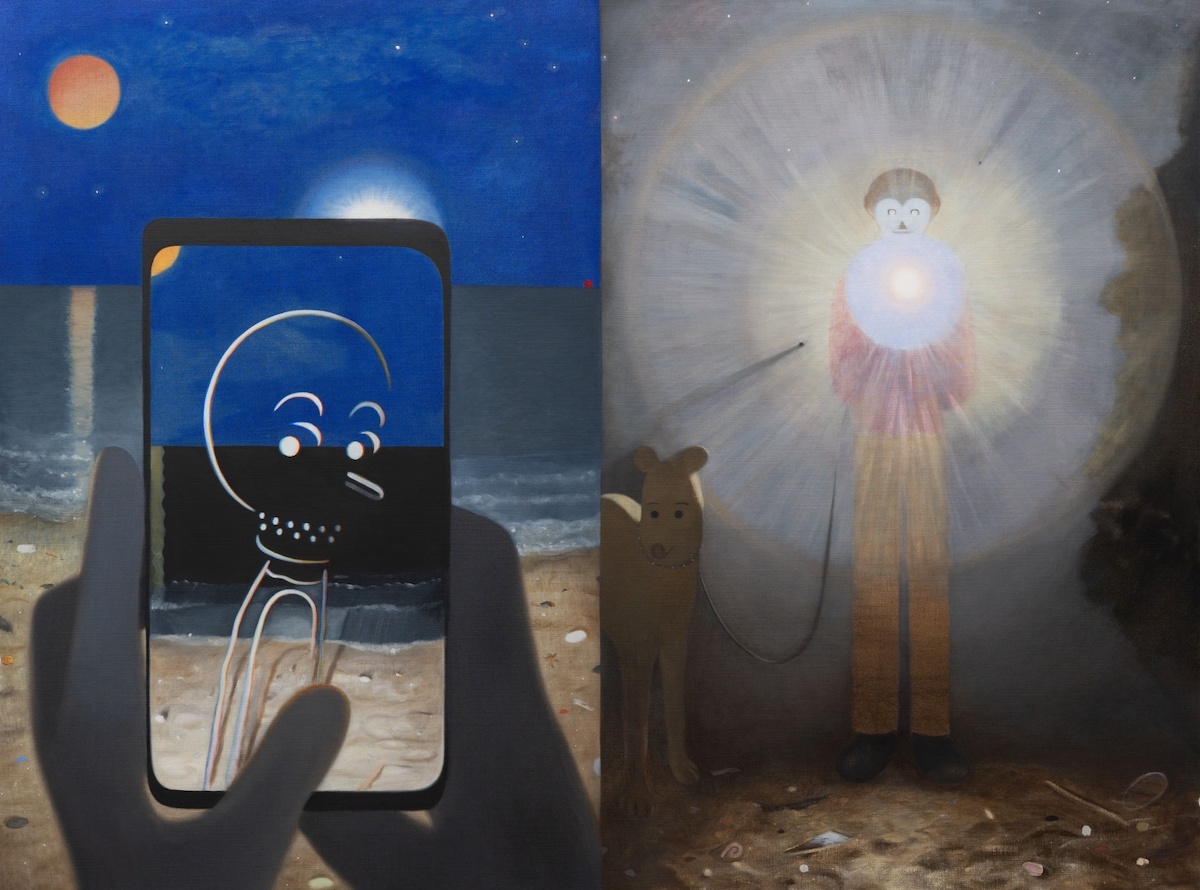 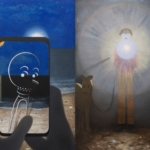 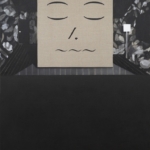 The masked human figures with animal-like traits and personified animals that Kurata depicts, while permeating with an air of tranquillity, are humorous and at times harbour a certain uncanniness. The recurring motifs in his works such as dusk, sea, night, cars, eggs, and the act of sleep, draw inspiration from “highly personal” experiences that are strongly engraved within his memory. Kurata explores expressions that can only be found in painting by referencing these sources of inspiration and “raising or lowering the resolution of the image” amid the repeated process of digital drawing and the physical production of the work.

While the unique sense of perspective, vivid colors, and the renditions of light and lines appear somewhat reminiscent of digital imagery, Kurata’s works are conceived through the relationship between the physical elements of painting such as the delicate impasto of the paint, areas of the linen canvas that remain unpainted, meticulously orchestrated brushstrokes, and the human body in terms of the scale of the canvas.

This exhibition consists of a series that Kurata has been working on in recent years, in which he divides the picture plane into multiple sections. Although the artist has employed a similar technique in the past, these latest works are characterized by the fact that different first-person perspectives seen from the eyes of each character, are made to coexist within the same canvas through this act of division.

Such a composition gives the viewer the impression that they are reliving a scene from their own memories or dreams. At the same time, as Kurata states, “I am trying to create an autistic visual space where neither the artist nor the viewer exists,” it also challenges the third-person’s gaze that has long been omnipresent within the history of painting. That is, a gaze that overlooks the events that unfold within the picture plane through a commanding perspective.

We invite viewers to take this opportunity to explore Kurata’s new works, which provoke fundamental questions in painting—who is looking at the painting, and what does it mean to look at the painting?

“What are those within paintings looking at, and who in turn are looking at them?

It is indeed possible to depict “something” even if there is nothing in front my eyes.

However, in that case, as the image comes to manifest, a transparent viewer who looks upon it is also brought into existence.

Who is this viewer? It could be perceived as the artist’s gaze, or simply a third-person perspective, but nonetheless it is also a somewhat eerie and uncanny presence as it occurs all too naturally like a shadow.

I have been thinking about this problem of the gaze for a long time. In the series titled “P,” the picture plane is divided into multiple sections, each of which are depicted from the perspective of the subjects within the painting.

The two spaces exist simultaneously to give rise to a closed dual-perspective painting that is devoid of the third person’s gaze.

Here, that which sees is also seen, both existing only through each other’s gaze.”