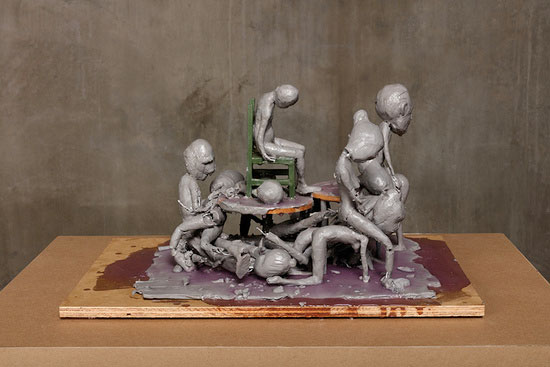 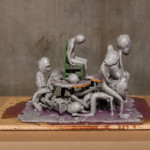 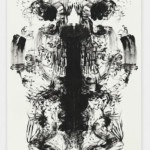 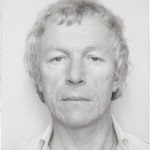 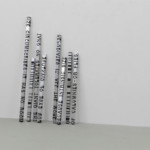 The central informing figure – the soul – of ‘Serialities’ is German portrait and documentary photographer August Sander (1874 – 1964), best known for his monumental project ‘People of the 20th Century”. Sanders’ remarkable encyclopedic archive comprises more than 600 photographs shot between 1910 and the early 1950s, and creates a provocative collective portrait of the artist’s fellow citizens, grouped according to determined sociological categories. A selection of photographs from his portfolio ‘People Who Came to My Door’, a subset of ‘People of the 20th Century’, will be on view in ‘Serialities,’ reflecting Sanders’ place in art history as a touchstone for subsequent generations of photographers and artists. In particular, his practice presaged and influenced the photo-based conceptualism that emerged in the early 1960s with such artists as Bernd and Hilla Becher. The Bechers’ shadowless photographs of industrial buildings and structures, framed with a distinctive frontality and presented in grids, echo Sanders’ fascination with visual cataloging, taxonomies, and the implicit politics of connecting past and present.

During the 1970s, American conceptual artist Sherrie Levine developed a series of photographic works based upon other artists’ well-known photographs. Her appropriated repetitions vary crucially from their source materials through almost imperceptible differences, tiny nuances that nevertheless render the works her own and introduce a host of questions about contemporary context. In ‘Serialities,’ Levine’s ‘After August Sander’ (2012) includes photographs of 18 works selected from Sander’s original opus. Also on view is Levine’s ‘African Masks After Walker Evans 1 – 24’ (2014).

Roni Horn‘s ‘Portrait of an Image (with Isabelle Huppert)’ (2005) exemplifies the ways in which this noted American artist employs seriality and repetition to create her own encyclopedia of identity. Here, 50 photographic portraits depict French actress Isabelle Huppert performing a variety of emotions. Horn’s piece is a poetic study of the rich gulfs of difference between even the smallest variations.

Horn’s sculpture series ‘Keys and Cues” and ‘When Dickinson Shut Her Eyes’ comprise aluminum and cast black plastic bars with lines of texts of poetry by Emily Dickinson. Each bar is of the same thickness but of a different length, with the lines of text running in varying directions and sometimes mirror-inverted. In the ‘Key and Cues’ series, each bar features the first line of a Dickinson poem; in the works ‘When Dickinson Shut Her Eyes: No 859’ (1993 / 2007) and ‘When Dickinson Shut Her Eyes: No. 1259′ (1993 / 2004), several bars lean as a group against the wall to make up an entire poem. The result is a collection of objects that prompts the experience of both looking and reading. Notably, Dickinson did not title her poems; they were numbered posthumously and indexed by first lines. Horn’s series features the numbers of the poems in the works’ titles.

Sol LeWitt‘s sculptures are executed in a comparably mechanical way. ‘Serial Project ABCD 5’ (1968) and ‘Serial Project #1 B789’ (1968 – 1969) are constructed of industrial steel according to a system of organized guidelines conceived by the artist.

‘This kind of art,’ LeWitt wrote, ‘is not theoretical or illustrative of theories; it is intuitive, it is involved with all types of mental processes and it is purposeless.’ LeWitt is not concerned with the concept of art, but with the conceptual basis for its making.

The rigor of repetition and pattern in the works of Sander, LeWitt, and the Bechers is likewise found in Zoe Leonard‘s large-scale wall installation ‘Natural Bridge’ (2016). In this composition of 731 postcards of a rock formation in Rockbridge County VA, Leonard uses the strategies of iteration and variation that are among the signatures of her critically acclaimed oeuvre. Her postcards, presented en masse, draw attention to the ways in which artifacts and cultural conventions have mapped and framed the topography of the natural world – and our understanding of it.

French-born Polish artist Roman Opalka pushed the concept of seriality to its outer extreme with his ‘OPALKA 1965/1 – ∞’ Détail series. In 1965, Opalka began measuring time by means of an artistic practice based on counting time. In his initial canvas, Opalka began with the number one, painting on the upper left-hand corner, and continued painting numbers sequentially in rows until he ran out of space, at which point he would continue the sequence on another canvas. Initially using white paint on a black background, Opalka evolved to a dark gray background, and in 1972, he began adding a 1% mixture of white to the black for each new canvas, reducing the tonal value of the ground until he stopped adding the white in 2008. This process continued serially, in a movement toward infinity, accrusing into a life-long body of work spanning five decades until the artist’s death in 2011. ‘OPALKA 1965/1 – ∞’ is a breathtaking example of an artist’s relentless exploration of the mutability of time and its inextricable link with mortality.

‘Serialities’ includes ‘OPALKA 1965/1 – ∞, Détail 2806353 – 2828874’, along with three photographic self portraits that were part of the artist’s project starting from 1968. After working on the numeric Détails for a few years, Opalka determined that the project was still incomplete, and decided to incorporate black and white photographs of himself, as marker of time’s passage, that he took at the end of each workday. Together with the paintings, these photographs form a poetic visual diary highlighting the artist’s journey through life. While the numbers continue to increase on the canvas, Opalka’s photographs capture his decrease – the ageing of his body. Opalka also complemented his painting process with recordings in which he counted, in Polish, the numbers he was inscribing. An excerpt of these audio recordings is part of ‘Serialities.’

In other works on view, seriality is a central element of the artists’ working process – but without any defined end point. Stagecoach is one of Paul McCarthy‘s major ongoing projects within a sprawling multidisciplinary practice in which repetition and variation – of imagery, of spoken words, of scenarios – abets narratives that pitch America’s favored mythologies against very real human drives and desires. Spanning a period of nearly five decades, On Kawara‘s signature ‘Today” series (also known as the ‘Date Paintings’) began in the 1960s. Each meticulous painting offers viewers a calendar date that may have been personally or historically significant to artist. A strict formula governed the size of these canvases, the color of the paint, the language relating to the date of composition, and the time allowed to complete the painting. The creative steps never varied, with On Kawara’s routine of seriality transforming production into an open-ended meditation for the artist.

For Brazilian artist Mira Schendel, seriality formed the basis of a celebrated decades-long practice. On view in the exhibition are untitled works from two of her 1970s series ‘Linear Drawings / Desenhos Linearest’ and ‘Objetinho gráfico / Little Graphic Object’. Each builds upon a series of symbols, lines, letters, and shapes to convey an intense aura and corporeal presence. Meanwhile, Mark Wallinger‘s recent ‘id Paintings’ express the bodily in a more directly personal form as a self-portrait series referencing the artist’s own body. Each work in the series is an element in Wallinger’s ongoing investigation into the relationship between the self and a society in which behavior and personal identity are coming under increasingly close scrutiny. The ‘id Paintings’ are Wallinger’s record of intuitive actions that express the primal, impulsive, and libidinal characteristics of the id.

Visitors to ‘Serialities’ are invited to a special designated Book Lab in the form of a Reading Room on the gallery’s 3rd floor. Here, a curated selection of catalogs offers additional insights into the practice of each of the artists represented in the exhibition. Additional texts address the overarching theme of seriality that anchors the exhibition. Vitrines in the gallery bookshop feature archival materials related to the work of August Sander, including his historic seven-volume portrait of Weimar Germany, ‘People of the Twentieth Century’. The Reading Room is part of Hauser & Wirth’s ongoing Book & Printed Matter Lab program, which highlights the important place that books and printed matter occupy in the practice of artists.